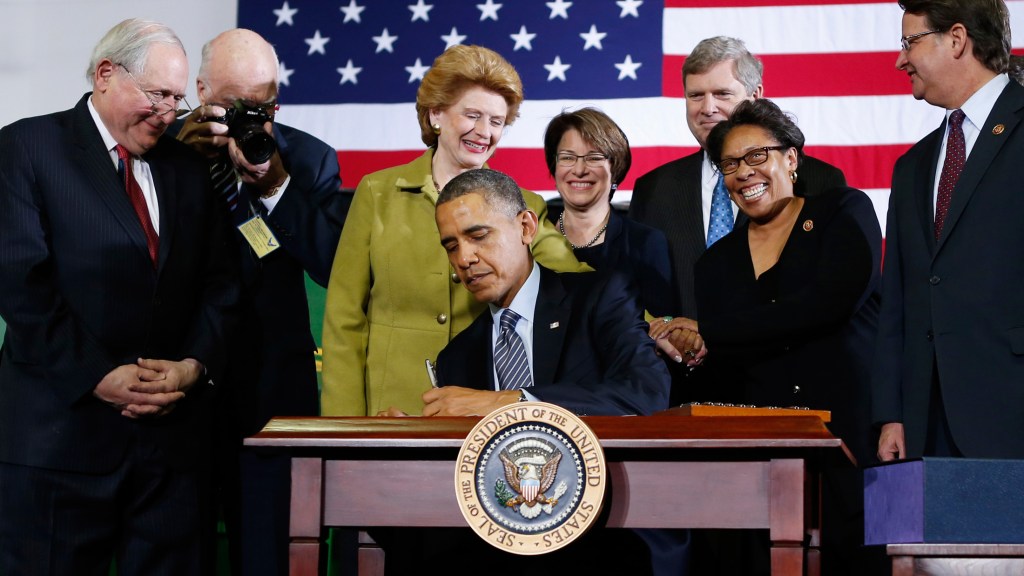 President Obama signed the farm bill today, bringing to a close a legislative odyssey. The president made it official at Michigan State University, apparently as a nod to Michigan Sen. Debbie Stabenow, who midwifed the law into existence. Michigan State is also one of the institutions that will be doing basic ag research funded by the bill.

Grist started covering the voyage of the “2012 Farm Bill” (ha!) back in 2011. Early on, there were rumors that Congress would pass a quick farm bill in a couple of weeks. Instead it took a couple of years: The legislation still had to languish among the lotus eaters and sneak past the cyclops.

Now that it has become a law, many of its programs will run for five years, setting a stage for a new law in 2019 … ish.

“We used to have a pretty regular every-five-years-like-clockwork schedule,” said Christopher Wolf, an agriculture economist at Michigan State University. “We’ve been more on a six-year schedule since the 1990s, and not on purpose.”

This law was complicated by a fight over food stamps, which haven’t been so controversial in past farm bills. But this time we had a steep increase in food stamp costs during the recession, which coincided with the rise of spending-averse Tea Party politicians.

In the end, those sharp-knifed conservatives only succeeded in carving out modest cuts to food stamps, but enough that 1.7 million struggling people around the U.S. will lose an average of $90 a month.

On the conservation side, there are enough perks in the bill to have won support from many environmental organizations.

When it comes to mainstream agriculture, the bill eliminates direct payments to farmers but increases insurance. That’s supposed to be cheaper. But it could end up being more expensive if the farm economy goes into a tailspin — and if the normal cyclical pattern of ups and downs in agricultural markets continues, we’re due for a rough patch.

We’ll have five years to watch how this law works out before the circus starts up again.