As a vegetarian, I understand why meat substitutes (substances that attempt to approximate the experience of eating meat — in taste, texture, and visual appearance) aren’t for everyone.

Some people question why an individual who doesn’t eat meat would even want to eat something that attempts to replicate meat. Others are more concerned with the highly processed nature of many of them, and understandably so: Most meat substitutes probably shouldn’t be a part of every meal (just like meat!). They’re filled with firming agents, stabilizers, additives, and ingredients you can barely read aloud, much less identify.

(To make sure we’re on the same page: I wouldn’t relegate tofu to the role of meat substitute. It might have been introduced to audiences in the United States as such, but tofu was never intended to be a replacement for meat where it originated, in Asia — and let’s be honest, tofu is good [it is!], but saying it tastes or looks much like meat requires an active imagination.)

But there’s another option, one that happily satisfies both those who enjoy meat substitutes in any form and those who would rather not eat a highly processed meat imitation. That option is jackfruit: a large — enormous really — fruit found in tropical regions around the world that’s eaten both ripe and unripe.

When it’s young and green, jackfruit works remarkably well as a natural stand-in for pork or chicken due to its meaty, shreddable texture after cooking. Ripe jackfruit is sweeter, and doesn’t work as a meat substitute, but can be eaten raw. 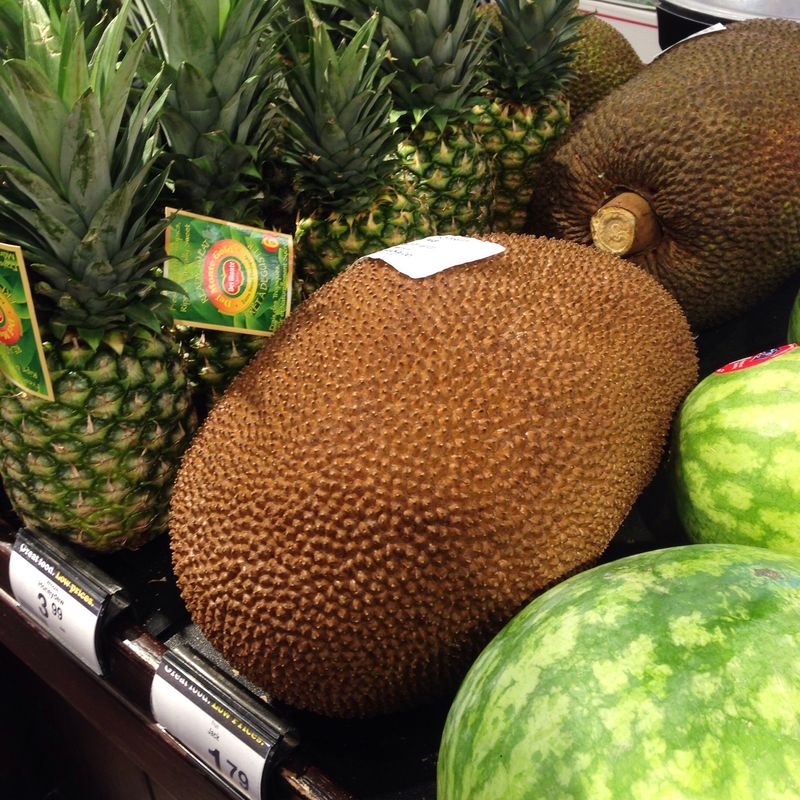 A very ripe jackfruit, spotted at my local grocery store.Food52

If you’re ready to try it yourself, you have options: fresh, canned, or packaged.

On Food52er Panfusine’s blog of the same name, she details how to break down a jackfruit:

Think of fruit and one expects to nosh on a healthy crunchy/succulent orb with an ethereal aroma, NOT something you have to dissect like a caveman sawing through a mammoth carcass. Well, with the jackfruit, it is exactly that. It starts with the sheer physical weight and size of the fruit, which can range from anywhere from 20 to 80 pounds and measure up to 50 inches in length. The stalk that attaches the fruit to the tree trunk (yep, it grows on the main trunk, since the branches would probably break under the weight!) needs to be sawed through to detach the fruit … (kinda make one nostalgic for picking an apple off a tree, doesn’t it!). And this is the easy part.

The easy part?! I’ll admit it; I’m intimidated. If you’re up for the challenge, head to her blog) for the full how-to.

Look for fresh jackfruit in well-stocked grocery stores or international markets. If you find it sold in smaller chunks, you won’t have to try and wrestle with an entire child-sized fruit — at least this time anyway. 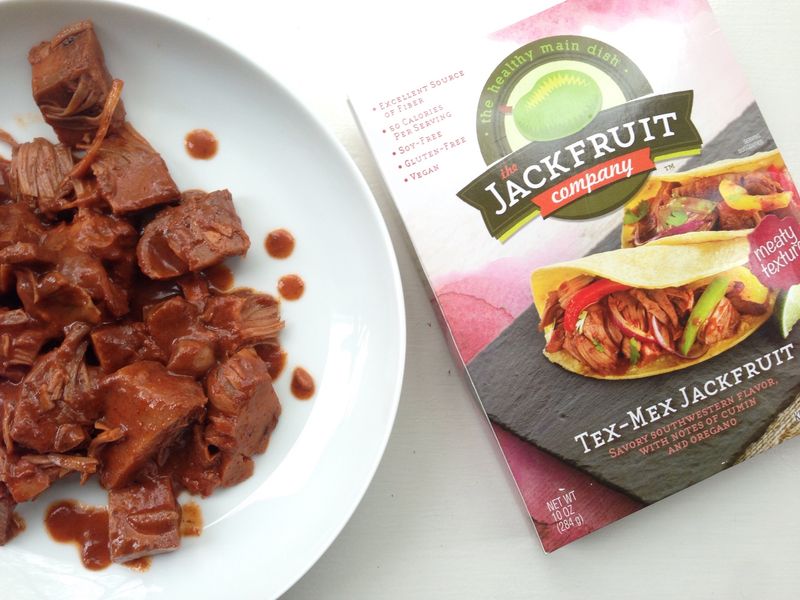 I probably could have spent more time plating this. Pretend I put it in tacos just like the picture on the package!Food52

If you can’t find fresh jackfruit near you (or would just prefer not to go through the hassle of prepping it), you can find canned young jackfruit in Asian markets or online. Make sure to get the jackfruit packed in brine or water — not syrup!

If you’re starting with fresh, green jackfruit or canned jackfruit, you’ll want to season it (it doesn’t have a strong flavor when unripe, which makes it a versatile ingredient) and cook it until the arils start to break down into shreds (often done by sautéing, stir-frying, or simmering in a sauce).

For the easiest option of all, look for pre-cooked, pre-flavored pouches of jackfruit in the refrigerated section near other meat-alternative products — there are at least a couple of different companies packaging it. Since all of the work is already done, you can heat it up briefly if you’d like, or eat it cold.

This is the option I went with, at least until I work up the nerve to tackle a whole jackfruit, and I was really impressed with the two flavors I tried by The Jackfruit Company (PSA: This article is not an ad). Yes, you’re paying a price to have all of the prep work done for you, but sometimes that’s worth it. Also, the ingredient lists are short and completely understandable, and it sources the jackfruit ethically and sustainably, with the mission to “transform healthy eating, farmers’ livelihoods, and humanity’s eco-footprint for the better.” It’s a feel-good fruit!

Drought is a life-or-death situation for low-lying islands