The Bundy brothers and the rest of the armed gang holed up at the Malheur National Wildlife Refuge in Oregon claim to represent ranchers. They don’t. Just ask my dad.

I grew up as a Montana ranch kid, and our lives revolved around federal grazing permits — and following all the associated rules. Every year, we’d saddle up and push herds of our cattle off our land and on to different forest sections. Most of our permits are managed by the Forest Service, but we have a section managed by the Bureau of Land Management, too. I spent endless summer afternoons with my dad while he counted hoof prints in the stream bed, measured the height of the meadow forage, and took photos of grasses. If you were to pull out a sleeve of old photos at our house, chances are you’d find pictures of cheatgrass mixed in with first-day-of-school shots.

While the armed occupation in Oregon is a ridiculous affront to law, history, and reason, it does capture a very real fear in rural America: That our way of life is under attack, and it could be just a matter of time before our access to the land disappears. (My colleague Nathanael Johnson did a wonderful job of explaining that concern.) Unlike the Bundys, my family pays our fees and abides by our agreements with the BLM and Forest Service. That doesn’t mean my dad doesn’t worry about losing access, too. He also worries that if ranchers are put out of business, their private land will be gobbled up by sprawling new subdivisions. 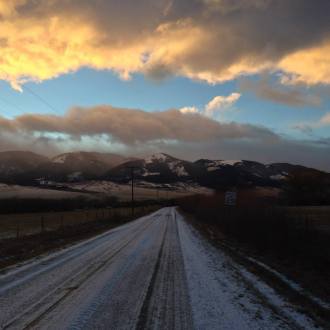 On the county road that runs through the Smith ranch. Darby Minow Smith

As an environmentalist and a rancher, I feel stuck in the middle — between, on one side, right-wingers claiming private ownership of public land, and, on the other, environmentalists who point out damage caused by cattle and call for an end to federal grazing permits.

I decided to call up my father, Paul “Brud” Smith. Our family has been ranching in the same valley for generations, and I wanted to get his take on the lawless ranchers. We discussed grazing permits and why he thinks cows on public land are an indicator species. Below is a lightly edited and condensed version of our conversation.

Q. Have you been following the business out of Oregon?

A. Ah, a little bit. What a piece of crap, huh? I hate when outsiders come in to tell locals how to run their business. They come in with their own agenda that may or may not have something to do with what the locals want and they tell them, “This is what you want locally.” Baloney!

Q. What do you think about them taking over the refuge?

A. They just want to run the whole show. The feds are backing off which I think they’re right to avoid a violent showdown with these idiots. But I would goddamn shut their electricity off tomorrow is what I would do. “Oh the pipes will freeze if they do!” Piss on it. They don’t own the stuff so let it freeze.

Q. Did you hear they did a call out for snacks?

A. It’s a good plan! Get them hungry enough and they’ll eat those brownies. They won’t know what hit ’em. They’ll eat all the evidence.

Q. What’s the appeal of the Bundys to some of our neighbors and fellow ranchers?

A. People get frustrated. They want to do it the old way where they didn’t have much interference, which ended up causing [water and overgrazing] problems.

Q. BLM grazing fee rates are 93 percent cheaper than the market rates. Would you consider that low rate a subsidy to ranchers?

A. Oh yeah, definitely. What else are you going to call it? Ask the other ranchers who don’t have permits. They consider it a subsidy. There are some hoops you have to jump through with the permits, but by any other name it’s a subsidy. When you’re paying $20-30 per animal unit a month for private stuff and you get it for [$1.69]? Come on. There’s a lot you can put up with counting blades of grass and [monitoring] riparian areas.

Q. Have you ever been worried about our ranch getting kicked off our permits?

A. Yes, that’s why we bought [an additional piece of property in the mountains]. Having ranches that rely on permits keeps things open and out of subdivisions. The idea that environmentally everything is going to be rosy if the cattle aren’t up there is a false premise. There’s a mutual dependence as far as open space goes. Without forest permits, a lot of ranches won’t be able to do it or they will sell [their property piece by piece]. The marginal land goes into subdivisions first.

A. No, I think there’s pressure there and a lot of environmentalists say it would be better for the land and wildlife if we didn’t have those nasty cows pooping on our trails. And there are problems. There are some instances of overuse, but that’s why they have the managers at the Forest Service and BLM monitoring.

Q. Does it really depend on who’s monitoring the land and who the local management is?

Q. What would happen to us if we didn’t pay our permit fees?

A. They’d arrest my daughters. I’d say, “It’s all their faults. They’re in charge of the permits.” And then I’d give them your addresses.

Christ, a couple years ago I didn’t pay it on time when [my father] died and we were getting things straightened out. The [old manager], god, he was a butthole, and he wasn’t going to let us on the forest unless I wrote a check right then.

Q. What would happen if we kicked cattle off the forests?

A. We’d lose some ranches. The others would have to get smaller. People would have to work even more jobs to keep their ranches going. There would be a lot more subdivisions and a lot less wildlife around.

Q. Would corn feeding and feedlots become more of a thing?

A. That’s a tough one because I don’t think we could grow corn on our property.

Q. But would we buy more feed or just sell off a bunch of our cows?

A. Sell off a bunch of our cows. I don’t think it would pay to ship corn from Iowa out here. With a lot of the land in Montana, you can’t grow other things on it. There are too many rocks. The growing season isn’t there.

Q. So there would likely be fewer American cows. I imagine we’d be eating a lot more imported beef.

Q. And you have countries like Brazil where they are razing rainforests for cattle.

A. People would be getting their beef, but it would be coming from places with less stringent environmental laws.

Q. What’s one thing you wished the public understood about ranchers and grazing permits?

A. There are indicator species that show that a forest is healthy. I’ve long maintained that cows on grazing permits are an indicator that there’s a system that’s working. There’s open space out there. There aren’t subdivisions choking up around the forest. In Montana and the countryside, people love to see open spaces. And that’s what ranches stand for. To me, it’s more sustainable as a whole. Go to Colorado and look at the suburban sprawl there.