While the Trans-Pacific Partnership talks were in progress, I kept seeing headlines suggesting that negotiators might end protections for U.S. sugar producers. Of course that didn’t happen. There were also suggestions that Canada might throw open its highly regulated milk market. That didn’t happen either.

The TPP opened North America’s door to imports of milk (in Canada) and sugar (in the U.S.), but just a crack. It seems that North American farmers are giving away very little, and getting a lot in return.

The U.S. Grains Council hailed the agreement, and estimated that it would increase grains exports 11 percent. The meat industry is also happy. The Wall Street Journal said that agriculture was one of the biggest winners in the U.S.:

Within the business world, some of the broadest support came from the farm sector. The TPP would eliminate trade partners’ import taxes of as high as 40 percent on U.S. poultry products and fruit and 35 percent on soybeans, while seeking to minimize unpredictable export bans that can upend business for agricultural firms.

Contrast that with milk and sugar. Canada is letting 3.25 percent of its milk come from imports, and it’s promising to pay $4.3 billion to make up for farmers’ loses. The U.S. will allow 65,000 metric tons of sugar in per year without tariffs from the other partner countries (and only if Mexico can’t provide it). “We don’t see ourselves as being harmed economically by these provisions,” Jack Roney, an economist with the American Sugar Alliance, told Capital Press. “The volumes involved are really not large enough to have a significant effect.”

The crops with lobbyists and political connections seem to have gotten help. Sugar isn’t a particularly large part of the American economy, but I’m not surprised that it didn’t have to make significant concessions, because sugar growers have long had outsized sway in Washington, D.C. There are a few wonderfully over-the-top examples of the sugar industry making its political clout visible. If you will forgive me for quoting myself, I’ve written about this before:

In 2004, after the WHO recommended that added sugars should account for no more than 10 percent of a diet (a widely accepted proposition already enshrined in the U.S. food pyramid) the emissaries of sugar appealed to the U.S. government. President George W. Bush’s administration responded to the call, denouncing the WHO’s recommendation and threatening to pull U.S. funding from the organization. This time, the WHO, to its credit, stood firm.

This access to presidential power hasn’t been restricted to Republicans. Monica Lewinsky’s testimony revealed that President Bill Clinton interrupted one of their Oval-Office interludes to take a call from a member of the Fanjul family — one of the handful of Florida cane growers receiving government sanction to ship in Caribbean workers and pay them less than minimum wage. South Florida columnist Carl Hiaasen, who watched the Fanjul family power grow, told Vanity Fair, “The most telling thing about Alfy Fanjul is that he can get the president of the United States on the telephone in the middle of a blow job. That tells you all you need to know about their influence.”

If we could do away with this sort of extraordinary influence, bringing down trade barriers could be good for the environment. This is a bit counterintuitive, because shipping milk from New Zealand sounds awfully greenhouse-gas intensive. But plopping aseptically sealed, unrefrigerated boxes of milk on container ships turns out to have a small climate impact compared to the milk production itself (even with meat, which must be kept cold, transportation is a tiny part of the greenhouse-gas footprint).

And international trade allows these products to come from the environments best suited for their production. A farmer in Australia growing sugarcane can produce a lot more sugar, using less land and energy, than a farmer in Idaho growing sugar beets. Similarly, it’s more efficient to produce milk in New Zealand than the U.S. or Canada, where the weather is often too cold, or dry, to support pastures for the cows. In New Zealand, dairies generally graze cattle on clover and ryegrass year round, which provides climate benefits. A United Nations assessment found that producing a kilogram of milk in the U.S. produced nearly twice the amount of greenhouse gases as producing a kilogram of milk in New Zealand.

It’s likely that New Zealand dairy would be cheaper than alternatives. Canadian dairy farmers protested the TPP because they were terrified of losing their shirts to cheaper imports. So New Zealand dairy would likely be cheaper with lower emissions. Of course, there are other ways to figure this: If, instead of focusing on minimizing greenhouse gas emissions, we were trying to keep small dairy farmers in Canada, trade barriers make perfect sense.

This principle — that greener production practices are more efficient, and therefore cheaper — does tend to apply to meat and dairy, so increasing meat exports from the U.S. could be good for greenhouse gas emissions in the long term.

Also, the grain for animal feed is more efficiently grown in America (see figure below). This principle doesn’t apply if we are switching from backyard pigs raised on local grain, to backyard pigs fed on imported, conventional-ag grain. But even the poorer countries in the TPP are ramping up into bigger forms of meat production. If you are importing feed from across the globe, I suspect it’s not for backyard pigs. Increased exports from American farmers should help hold down the total greenhouse-gas impact of global agriculture. 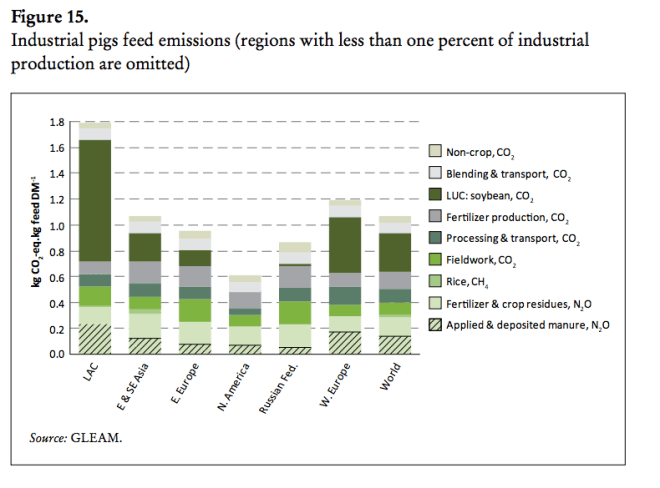 As we’ve pointed out before, we won’t know the exact details of the agreement for about a month. But, at least when it comes to agriculture, I worry that we are seeing a repeat of a pattern that has given free trade a bad name. In principle, free trade is just about eliminating tariffs. But in practice, “free trade” too often favors the rich and powerful. Instead of everyone booting their trade barriers and subsidies, it’s often the poor countries that drop their trade barriers, while, in return, the rich countries protect their constituent industries a tiny bit less.