In the wake of World War II, young veteran Cleo Fitterling returned home, wondering how he was going to make a living. Drawn to farming, he enrolled at a local college and began taking classes in agriculture, later buying acreage southeast of Kansas City. But what name should he give this ornery stretch of land he began to tame? The work was endless but rewarding. It was costly. As the realities of the toil swiftly struck, Fitterling registered his dark-humored choice: He called it Mounting Debt Farm.

And so it remained for many years, even as Fitterling began to make a solid living, says his daughter, Bonnie Fitterling Braun, who now farms with her husband in Fairfield, Pa. Mounting Debt was long ago sold, the name changed.

That’s the thing about names. Sociologists believe that we christen people, places, and things in hopes that they remain eternal. But names reflect both place and time. They slip away, to be replaced by new ones.

Historically, farms were named for the families who owned and worked on them — the Johnson, the Smith, or the Kozlowski farm, let’s say, noting a period of time when families farmed together and the farmstead was handed down through the generations. A more poetic farmer might have gleaned a name from the surrounding landscape: Rolling Hills, Fresh Spring …

These days, younger and more modern farmers are giving their land names that reflect both marketing savvy and a dash of whimsy.

In Ilderton, Ontario, Josie Salomons, her husband Nick, and two children run the five-acre Flock Ewe Farms (12 ewes, one ram) named on a giddy lark after rejecting more conventional names. “It raises eyebrows,” Nick says. “I’m not sure if the name contributes to new customers, but it adds to the story. It’s one more notable layer in people sharing their experience of buying farm-fresh, grass-fed lambs.”

In Woodland, Calif., say hey to the Say Hay Farms, run by Chris Hay, who started his 20-acre organic spread in 2010. Seeking a memorable name, Hay says he settled on the word-play because it “seemed to make people smile.” The former Berkeley resident says he’s preparing to add another 30 acres to the farm where he grows mixed veggies and raises pasture chickens for eggs.

An urban farm in North Portland goes by Wealth Underground. In Lakeview, Mich., the owners of Blazing Pitchforks Ranch named their small chicken, rabbit, goat, and duck farm for the speed at which their children tend to the barn when promised a reward. It boiled down to brevity for the LoTfotL Community Farm in Elkhorn, Wis., where April Yud says the acronym stands for Living Off The Fat Of The Land. 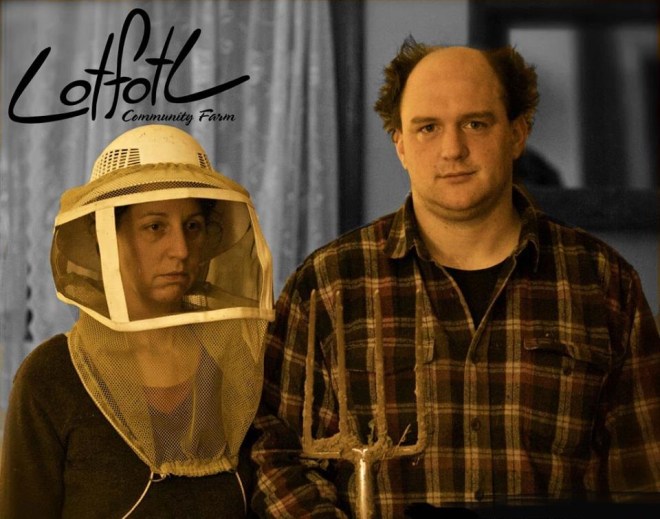 April Yud and Tim Huth on the LoTfotL Community Farm in Elkhorn, Wis.

Toril Fisher literally pulled the name of her 27-acre spread in Driftless, Wis., out of the air. As she tells it, she and her husband were out driving on the winding country roads shortly after they bought the place, when they became lost.

“My husband asked me if I had any clue how to find our way back to the farm,” she recalls. “We live on a ridgetop and you can’t see the horizon line, only the sky. All I could recall was that there had been a big cloud to the left, so I told him to look for a steep hill near a cloud, and we found it, along with our name” — Second Cloud On The Left Farm.

Glean the internet and you’ll find discussion boards where farmers test-run possible names. Dig and you’ll find dozens of variations on what ails a farmer, using the word acre — Headacre Farm, Tooth Acres Farm, R Heart Acres and a gazillion reinterpretations of donkey (My Ass Acres) and dairy operations where udder is often blended with delight, happiness, or chaos. 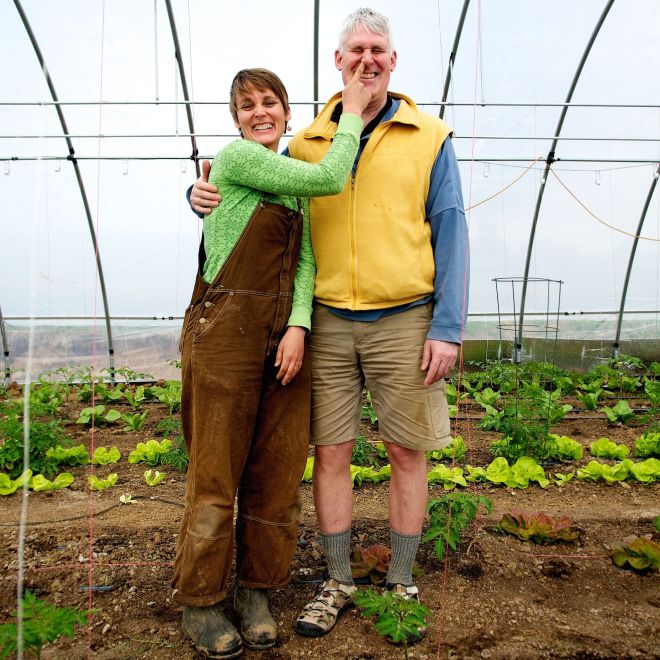 Toril Fisher and her husband, Drew, run the Second Cloud on the Left Farm in Driftless, Wis.

New names, all. But some old names do seem to stick.

Take, for example, the six-acre dairy farm on the side of a hill in Westminster, Md., started by another WWII vet, Earl Moran. Because Moran couldn’t stay ahead of the endless chores, his father named the spread Nev-R-Dun Farm.

In 1999, when looking for land to farm, Tom Reinhardt came across the old Moran land, its name still posted in the driveway. “It’s my farm now and I kept the name because it fits me, too,” says Reinhardt, who worked in restaurants before deciding to farm and now raises organic vegetables. “I’m never close to done at the end of a day.”

Turns out he’s not alone. Several hundred miles away, up in Arundel, Me., Stacy and Marylyn Wentworth run a cooperative they’ve owned since the early 1970s. Stacy says a friend appeared on his doorstep one Christmas, after the Wentworth’s had been farming for two years, with a homemade wooden sign. That sign still hangs over their door. The hand-carved letters spell out, Neverdun Farm. 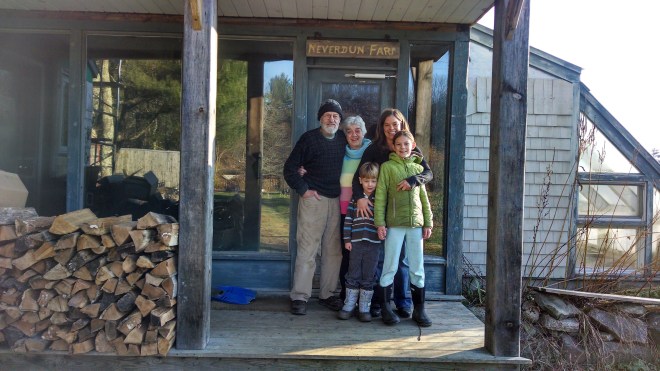 Stacy and Marylyn Wentworth, their daughter Leah, and grandkids Uriah and Macy Simonsic, on Neverdun Farm in Arundel, Me.