In 1845, John C. Fremont was exploring the state that would later come to be known as California. He met a man who had been traveling with a group of trappers, who told him a story. The trappers had run out of food, and decided that the best way out of their predicament was to steal several bags of dried fish from a nearby Native American camp.

“The stomachs of the stout trappers were not proof against their prejudices,” wrote Fremont, “The repulsive food was suddenly rejected.”

Recently, I was walking through a grocery store in Manhattan, looking for something to eat on the train.  I found myself eye level with an energy bar whose label bragged about its protein content. All of this was normal — protein is the new low-fat (just as, once, “low-fat” was the new “high fiber”). But one thing was different: the energy bar was made with crickets.

I’d been following the world of insect-eating (entomophagy, to use the precise term) long enough to know that I was looking at a tiny shrink-wrapped miracle.  To get to this point, a lot happen behind the scenes in the American food system. Some people had to set themselves up as growers of insects that met the legal standards of food for humans, not just pet lizards. They had to get approval from the FDA, an agency that thought more about how much insect could accidentally make its way into your food than it did into developing food safety standards for people who wanted to put them there on purpose.

Eating insects isn’t exactly mainstream in America — it’s still out there on the dietary fringes. It owes its emergence to several different trends: the high-protein diets favored by bodybuilders and bodybuilder wannabees, the paleo diet (hard to get more paleo than insects), and the belief that American millennials are more likely to want “exotic” foods than their predecessors.

But why didn’t insect-eating become a part of this culture sooner? Not everyone who came across the insect-foraging cultures of North America had a terrible time, even in the 19th century. The botanist William Henry Brewer, who arrived at Mono Lake in Northern California in 1863, seems to have had a fine time eating the “fish.” Brewer came during the spring harvest, when tribes converged on the shores of the lake. The lake was filled with pupae who had grown chubby from eating the lake’s microscopic algae. The fat and protein that they had packed on would kickstart their metamorphosis into an adult fly, but until that metamorphosis happened, Mono Lake was an all-you-can eat insect buffet. 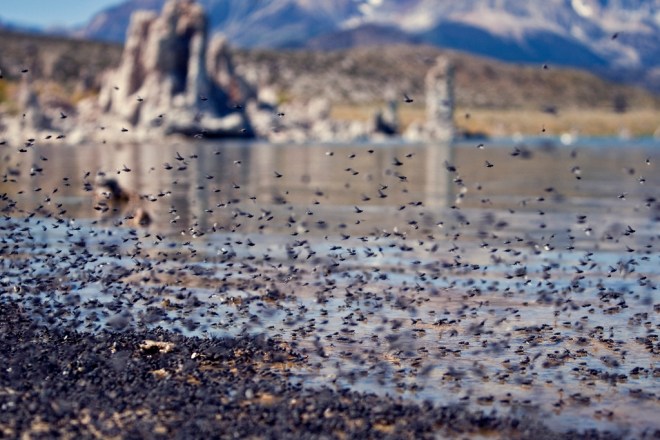 “The Indians come far and near to gather them,” Brewer wrote.

The worms are dried in the sun, the shell rubbed off, when a yellowish kernel remains, like a small yellow grain of rice. This is oily, very nutritious, and not unpleasant to the taste … The Indians gave me some; it does not taste bad, and if one were ignorant of its origin, it would make fine soup.

Mark Twain, who also visited the lake, described it in Roughing It as a “lifeless, treeless, hideous desert.” But appearances were deceiving. Mono Lake was never going to be a landscape that could be farmed — it looked like a science fiction film set. But people who knew how to make use of the flies of springtime were like any culture that figures out how to survive in an inhospitable climate — they had found a species that could convert something inedible (in this case, algae) into a complete protein, and then they ate that species.  “There is no danger of starvation on the shores of Mono,” wrote John Ross Browne, a journalist for Harper’s Monthly, “The inhabitants may be snowed in, flooded out, or cut off by aboriginal hordes, but they can always rely upon the beach for fat meat.” 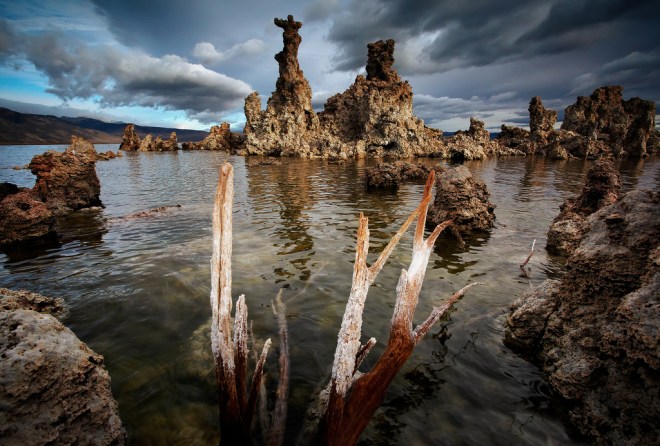 Europeans and their descendants have experimented with insect cuisine here and there (See: the lively maggot cheeses of Europe). But mostly they have focused on getting rid of insects, rather than turning them into dinner.

Why is it that Europeans never learned to eat bugs? I’ve heard the theory before that it’s because of livestock: Europeans spent so much time hanging out with chickens, goats, sheep, cows, and pigs that going after tiny invertebrates was beside the point. I’ve also heard the argument that agriculture is the culprit: By planting all the foods we like together in one convenient place, we created insect buffets, which then turned insects into the enemy that must be destroyed. But ranching, farming and insect-eating coexist in many cultures in Asia and Africa — so much so that some farmers will use their own fields as bait, capturing the insects that come to eat their crops and then eating them or selling them at the farmers market.

It’s more likely that the limiting factor is temperature. If you’re cold-blooded, like insects are, you’ve got to live in a warm place if you want to have any fun. Insects in cold areas stay small; insects at tropical latitudes grow big and juicy and hang out together in large groups that make them an appealing target. The Native Americans living on the East Coast were not big insect eaters, while the ones living in balmy California and Mexico were amazing at it. When Europeans arrived in a climate like California’s, they simply didn’t have the background to appreciate the invertebrate smorgasbord that was in front of them.

Today, the alkali fly is still a major presence at Mono Lake, but the only thing humans harvest from Mono is the water. In 1941, the Los Angeles Department of Water and Power began diverting the freshwater streams that feed the lake so that instead of pouring into the lake, it traveled 350 miles south to Los Angeles. The fly population dropped by half, until environmental activists limited the amount of water that was being diverted to protect the only species that still eat the fly larvae — birds. Millions of birds come to the lake during fly season, some of them eating so many insects that they become too fat to fly. Meanwhile, the California drought has left Mono Lake at its lowest levels in decades. Humans still make the pilgrimage out to the lake, but just to watch the birds, not to join the feast.

So we’re still pretty far away from pop-up shops hawking artisanal Mono Lake pupae. In the U.S., entomophagy enthusiasts have chosen to focus on farming insects, instead of foraging for them. Which makes sense: farming is what we know.

But how easy is it to apply farming techniques to insects? More about that in part 2.