Stroll through the aisles of your supermarket and you’ll see advertisements left and right for snacks packed with the new magical nutrient: protein. Wheyhey ice cream — “20 grams of protein per pot” — promises to help you with “losing weight” and “skin anti aging,” while P28 high protein sliced bread wants to be “part of your journey to a healthy lifestyle.” Lenny & Larry’s protein-packed cookies supposedly help “chase away hunger.” Artisanal bison jerky bars line the Whole Foods’ checkout aisle, and everyone at work is on a paleo diet.

Do we really need this much protein? To maintain normal health, the average sedentary adult woman needs a daily dose of 60 grams and a man needs around 70. Yet data shows that Americans may consume around 120 grams daily. That means we’re consuming twice as much as what’s needed, likely without even trying. “If you have enough calories in your diet, not getting enough protein would be very, very hard,” journalist and author Marta Zaraska told me in an interview for the latest episode of Bite, “Zebra Meat and Vegan Butchers.”

In her new book Meathooked: The History and Science of Our 2.5-Million-Year Obsession With Meat, Zaraska digs deep into the reasons behind this protein hunger. According to Zaraska’s research, the craze goes much further back than the rise of the paleo diet and other protein-focused diets. In fact, one of the myths fueling this protein fixation has roots in a shaky finding from the 1800s. That’s when German scientist Carl von Voit determined how much protein soldiers and hard laborers consumed each day, and then extrapolated that the average body required 150 grams a day. “The problem with his methodology is obvious,” writes Zaraska: “It’s a bit like observing children stuffing themselves with cookies and concluding that young humans require tons of sugar to grow.” By 1944, the U.S. Department of Agriculture had halved that recommendation, but the idea that we need lots of protein to be healthy lived on.

Most of the protein we consume comes from animals: Americans eat roughly 270 pounds of meat a year. For years, many people thought that without animal flesh, our bodies don’t get all of the essential amino acids they need. (Meat is considered a “complete” protein because it contains all of the acids.) Zaraska traces some of this misunderstanding back to, ironically, Frances Moore Lappé, author of Diet for a Small Planet. In her seminal 1971 manual for embracing a low-impact life, Lappé suggested that vegetarians should chart the amino acids in their plant foods and eat the foods together at the right times to make sure they could “complete” their plant-based proteins through the right combinations of amino acids from different sources, a task that required laborious planning and analysis.

True, plant foods can lack enough essential amino acids; beans, for instance, are low in methionine. (Grains are high in methionine, hence the advice to enjoy rice and beans together.) But since the 1970s, we’ve learned that the body actually completes proteins — fills in the missing elements — on its own. “Now we know that the liver can store amino acids so we don’t have to combine [the acids] in one meal,” states the Academy of Nutrition and Dietetics. In the 20th-anniversary edition of her book, Lappé acknowledged that when it came to amino acids, she had “reinforced another myth.” Not only does the body complete proteins; there are several plant foods that have all of the essential amino acids that a person needs, writes Zaraska, such as buckwheat, quinoa, soy, and potatoes.

The consensus among many doctors and dietitians these days seems to be that if you are eating a diverse array of foods, you don’t need to stress about protein. The Institute of Medicine’s recommended daily allowance of protein is 0.36 grams per pound of body weight (adjusted slightly if you’re active, ill, or pregnant). I’d need about 42 grams to meet my requirement; when I added up everything I ate earlier this week, I was startled to discover that I had eaten 66 grams without thinking twice — and I don’t eat meat. Considering a single serving of chicken breast clocks in at 31 grams and a piece of skirt steak at 22, it’s easy to see why Americans frequently double-dip on their protein allowances. (Calculate your own daily allowance here.) 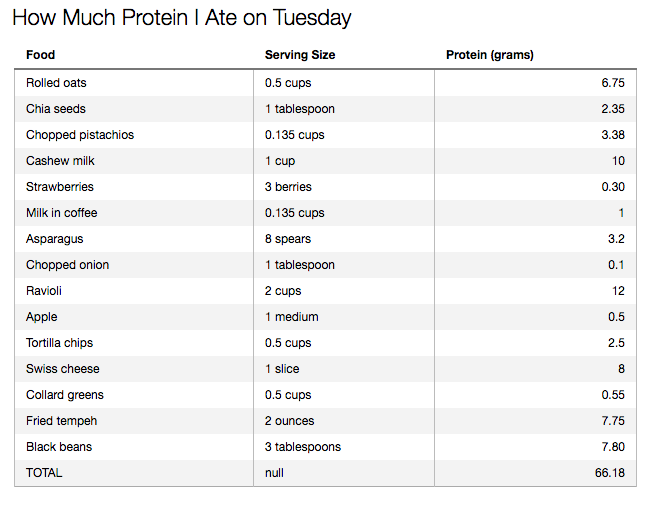 On its own, eating a lot of protein isn’t actually that unhealthy. As Stanford medicine professor Christopher Gardner told me, for the most part our bodies can tolerate extra helpings of the nutrient, though excessive amounts have the potential to wreak havoc on the kidneys. It’s what comes with the protein that puts us at risk, explains Gardner. When General Mills came out with its more expensive “Cheerios Protein,” the brand boasted that the new cereal would provide the whole family with “long-lasting energy.” But that energy likely had more to do with the nutty O’s sugar content; as the Center for Science in the Public Interest pointed out in a November class-action lawsuit, Cheerios Protein contains 17 times the amount of added sugar as the original, and only a touch more of the protein. (General Mills tried to get the suit thrown out in January, to no avail so far.)

Gardner also worries that in our hunger for protein, we’ve begun skipping real foods. We’re saying, “‘I’m not going to eat food, I’m going to have a bar as a meal’ — which means that it’s coming with fewer of the natural nutrients of food,” he says.

But Gardner’s real concern has to do with the planet’s health. Around 80 percent of the protein we consume comes from animals, he says, in the form of meat, eggs, or dairy. And those creatures need a lot of resources to become food. One-third of a pound of hamburger requires 660 gallons of water to produce, if you include the irrigation needed for the feed. Raising animals for people contributes to a bevy of environmental plagues, including deforestation, water contamination, loss of biodiversity, and desertification. Of the more than 25 percent of all greenhouse gases attributed to the food system, 80 percent comes from producing livestock.

In early 2015, the Dietary Guidelines Advisory Committee, a body of scientists who review nutrition advice for the USDA and the Department of Health and Human Services, advised the government to encourage a shift to a more plant-based diet: “Consistent evidence indicates that, in general, a dietary pattern that is higher in plant-based foods … and lower in animal-based foods is more health promoting and is associated with lesser environmental impact than is the current average U.S. diet,” the committee wrote. Ultimately, this recommendation was left out of the 2016 Dietary Guidelines. But others are sounding a similar alarm. Earlier this week, Oxford researchers published a report in the Proceedings of the National Academy of Sciences arguing that a global shift to a more plant-based diet could reduce global food-related greenhouse gas emissions by 29 to 70 percent by 2050 and save the planet up to $31 trillion, or 13 percent of the world’s GDP.

Protein-cramming probably won’t hurt you, but it likely won’t do you much good, either. And as the Oxford researchers note, the choices we make about food “have major ramifications for the state of the environment.” For the sake of our crowded planet, maybe it’s time to relax and stop trying to make protein part of every item on your plate.