Border communities and environmentalists are urging Joe Biden to take immediate steps to remediate the environmental and cultural destruction caused by construction of the border wall during the previous administration.

Donald Trump sequestered $15 billion — most of it from military funds — to partially fulfill an anti-immigration campaign promise to build a “big beautiful wall” along the southern border with Mexico.

As a result, hundreds of miles of the borderlands — including sacred Native American sites and protected public lands — have been bulldozed, blasted, and parched over the past four years, with little environmental assessment or oversight thanks to waivers suspending dozens of federal laws in order to expedite construction.

Biden ordered construction to pause on his first day in office, but community leaders and experts consulted by the Guardian warned that urgent action is needed to stop the damage to fragile biodiverse landscapes and scarce water sources getting worse. They are urging Biden to:

“We need coordinated rapid assessments to figure out what can be restored, and identify the most critical areas in order to contain the spread of the damage to waterways, soils, wildlife, and native species caused by the largest experiment in American history. It’s a ticking clock,” said Gary Nabhan, a Franciscan brother and ecologist with the Healing the Border project.

“It’s a disaster, a mess, the suspended laws must be put back on the books to give border communities equal protection, and every section looked at carefully so that it can be torn down in a coordinated and responsible way, and the damage addressed immediately,” said Dan Mills, the Sierra Club’s borderlands program manager. 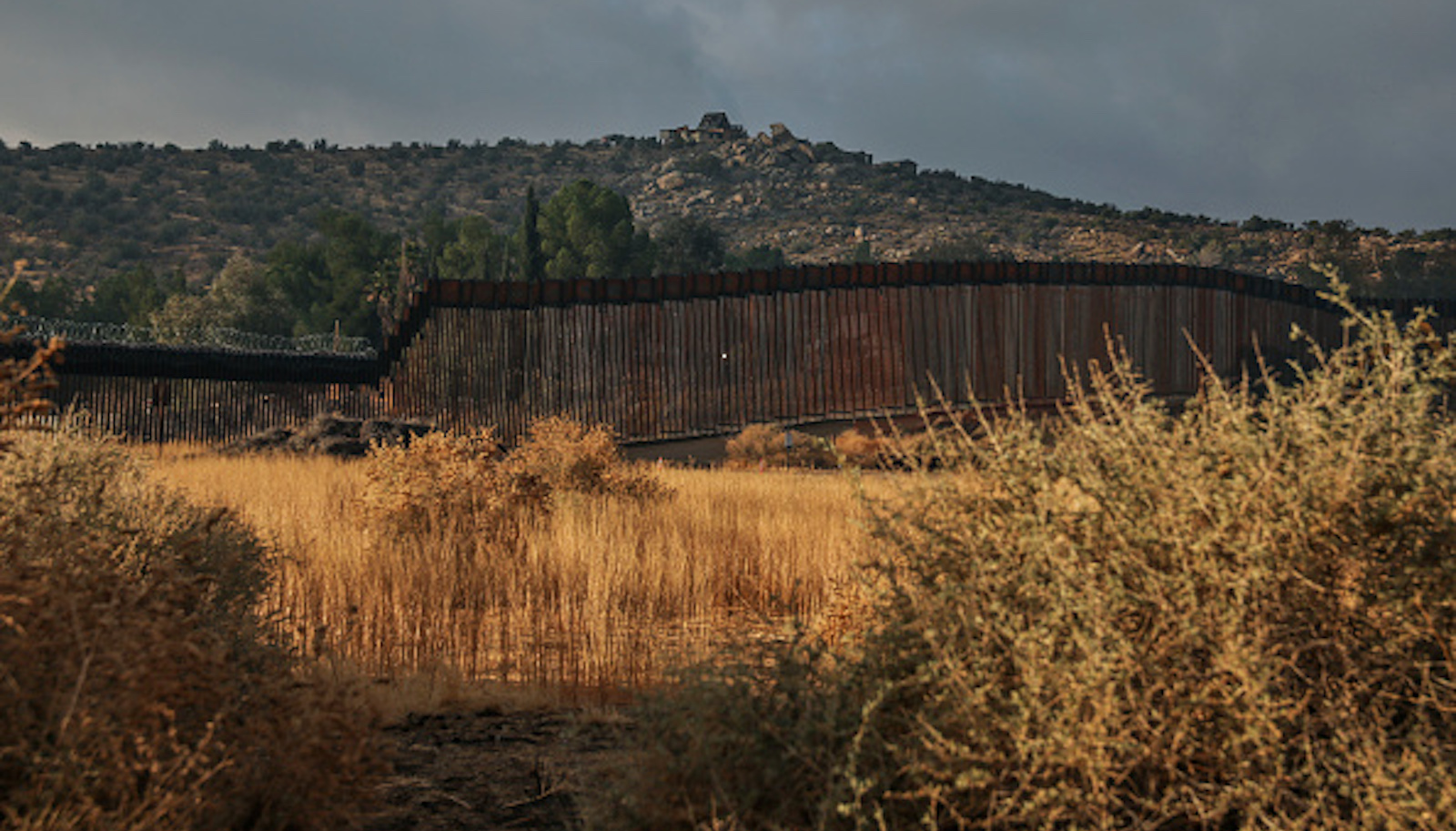 Work is done on a new border wall being constructed in early 2021. Sandy Huffaker / Getty Images

About 455 miles of the 30-foot metal wall (out of the promised 738 miles) was completed by the time Biden took office, mostly paid for by tax dollars earmarked for defense and counter-drug programs which Trump diverted by declaring a national emergency in early 2019.

An estimated $11.5 billion of contracts were signed and construction forged ahead despite multiple ongoing lawsuits challenging the constitutional basis of Trump’s executive orders. The supreme court will next month consider a case brought by the Sierra Club, ACLU, and the Southern Border Communities Commission which claims diverting billions of dollars from the Department of Defense against the will of Congress was illegal.

The impact has been disastrous.

The barrier has restricted access to floodplains that dozens of small, impoverished desert communities dotted along the Rio Grande, southeast of El Paso, relied upon for drinking, sanitation, and livestock. Local people are struggling to find enough water as extreme heat events rise in frequency and intensity as a result of global heating.

In addition, tens of millions of gallons of groundwater was pumped out to mix concrete, draining springs, rivers, and wetlands in fragile ecological areas already blighted by prolonged drought linked to the climate crisis.

At Quitobaquito Springs in Organ Pipe Cactus national park in Pima County, Arizona, 40 species of migratory birds, including the glossy ibis, sandpipers, and shorebirds that were registered every year between 2016 and 2019, did not return last year.

Rescuing groundwater sources — a rare and precious commodity in the desert — must be the priority as global heating means droughts and extreme temperatures are expected to continue, according to the experts consulted by the Guardian.

In Mission, Texas, a historic church and cemeteries — the final resting place for Native Americans, war veterans, freed slaves, and Christian abolitionists who shaped the cultural, spiritual, and racial history of the Rio Grande Valley — have been marooned in between the 30-foot barrier and the international border.

“It was a complete waste of money and poorly thought out, and is a constant unsightly reminder of Trump’s ugly approach to Latin America. The wall should never have gone up, we tried to fight it, and now it will be very difficult to undo,” said Sylvia Ramirez, 73, a retired professor, whose ancestors are buried in the cemeteries. 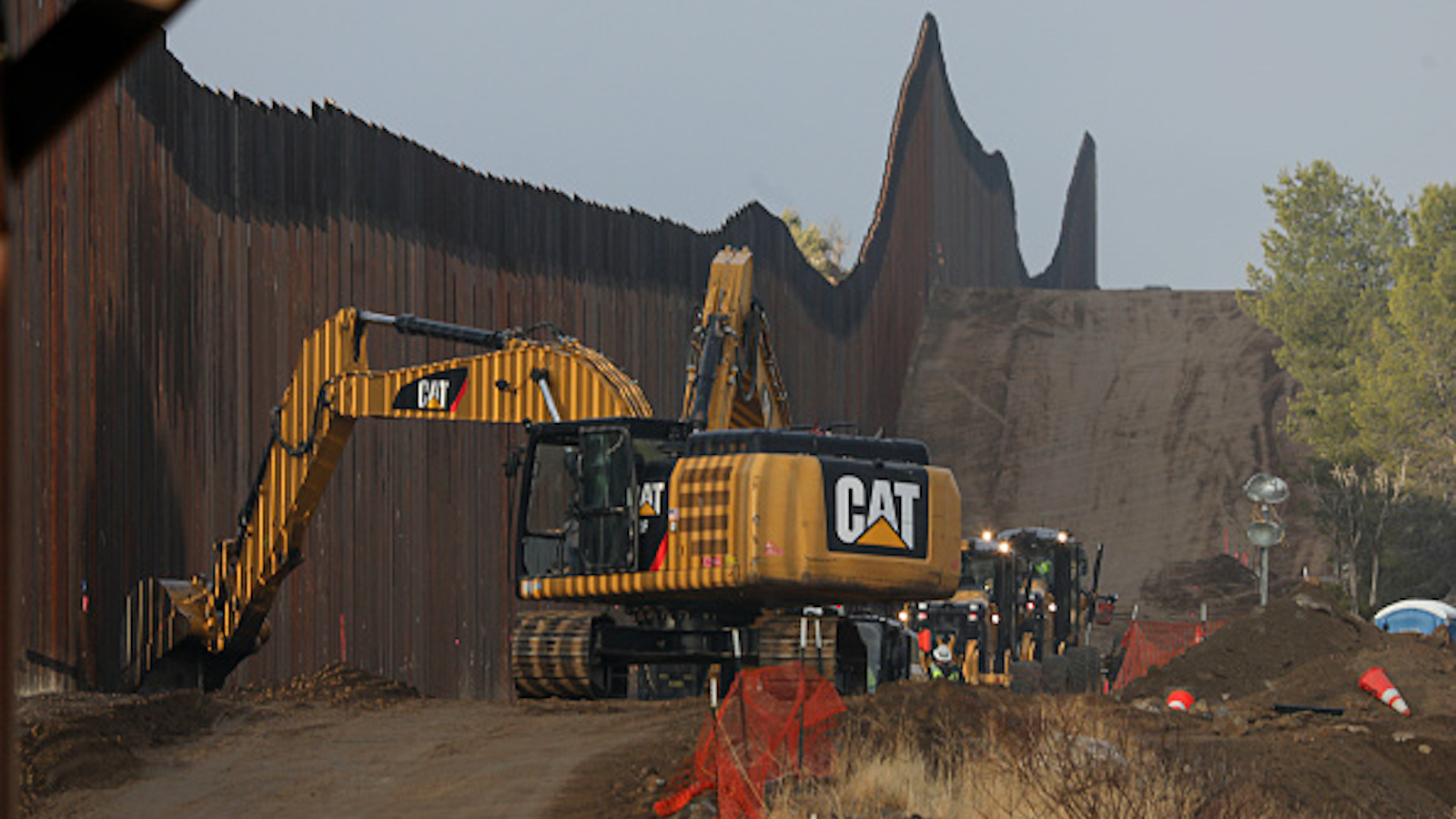 Work is done on a new border wall being constructed on January 22, 2021, in Jacumba, California. Sandy Huffaker / Getty Images

“We have an obligation to borderland communities, tribal nations, and wildlife to assess the harm and remedy and restore what we can. The federal government at the very least owes us that,“ said Laiken Jordahl, a borderlands campaigner with the Center for Biological Diversity.

Customs and Border Protection (CBP) did not respond to questions about how it planned to assess and remediate the damage caused to habitat, endangered wildlife, and border communities.

Biden’s executive proclamation on inauguration day ordered construction of the wall to pause as soon as possible, and no later than seven days. The legality of the funding and contracts is being reviewed.

CBP and the army corps told the Guardian that construction had been suspended in compliance with the president’s order. “[The army corps] has suspended work on all border infrastructure projects for DoD and DHS until further notice. Under this suspension, contractors are still required by the terms of their contracts to maintain a safe and secure job site, but all work in furtherance of construction has been suspended.”

Yet last weekend, advocates and photographers found crews working as usual at multiple sites in Arizona, including inside national parks and monuments.

“It’s a lie, I saw huge bulldozers digging up dirt on mountainsides, the crews were carving out new sections in some places and moving steel bollards closer to installation sites in others,” said John Kurc, a filmmaker and photographer who has been documenting the building of the wall from California to Texas.

Native Americans are accustomed to broken promises by the federal government.

The Tohono O’odham have resided in what is now southern and central Arizona and northern Mexico since time immemorial. The 1853 Gadsden Purchase divided the Tohono O’odham’s traditional lands and separated their communities. Today, their reservation includes 62 miles of international border, with 2,000 of its 34,000 members in Mexico.

While the wall does not traverse the reservation, construction destroyed ancient spiritual trails and multiple sacred burial sites, as well as vegetation such as centuries-old cacti, which are revered by tribal members.

Just as at Organ Pipe, at least 50 water courses have been blocked by the wall and about 10,000 sacred mature cacti were culled; only a fraction were successfully transplanted as promised.

Last year, peaceful protesters were teargassed and fired on with rubber bullets and detained while trying to halt the destruction of sacred sites.

“As caretakers of this land, the plants, and our four-legged brothers and sisters, the damage caused by the stroke of a pen in the name of border security feels like a razor-sharp knife across our hearts, it’s irreparable and hurts more than you could ever imagine,” said Verlon Jose, governor of the traditional leaders of the O’odham in Mexico and former vice-chair of the Tohono O’odham Nation.

“We have a glimmer of hope with the Biden administration but this needs to be followed by action, cancel the contracts and consult with environmentalists and tribal folks, as the law requires the federal government to do, so that we can start to heal the border.”

The Doomsday Clock has been ticking for 70 years. It’s time to let it die.