Shortly after the EPA’s March 26 announcement that it would relax enforcement of the country’s environmental protection laws due to the COVID-19 pandemic, a coalition of environmental groups called on the agency to publish an emergency rule. That rule would require polluters taking advantage of the relaxed standards to submit written notice to the EPA. The petition also called on the EPA to make that information public.

The groups say that the EPA ignored their request. Now, the coalition is taking the agency to court.

The Natural Resources Defense Council announced Thursday that it is suing the EPA on behalf of a coalition of nearly two dozen environmental justice, climate, and public interest groups. The coalition is asking the court to intervene and procure an EPA response to their petition proposing the emergency rule.

“EPA has refused our call to fix this reckless policy, so we’re taking them to court,” said Judy Robinson, executive director of Coming Clean, one of the plaintiffs in the lawsuit. “That’s how serious it is for us.”

The complaint, filed Thursday in the U.S. District Court for the Southern District of New York, alleges that the EPA’s enforcement discretion policy creates a serious and immediate risk that industrial facilities and others will halt the monitoring and reporting that constitutes compliance with statutory pollution limits. The policy applies to every industry, including chemical manufacturing and coal-fired power, and “virtually all other sources of pollution,” according to a press release announcing the lawsuit. The type enforcement that the EPA relaxed provides the public with information about hazardous air pollutants, toxic chemical releases, drinking water safety, and more.

“The policy poses a huge risk to public health, especially to downstream, downwind, and already overburdened communities — who, without timely information about air and water emissions, cannot protect themselves from being harmed,” the lawsuit states.

The EPA published its new enforcement discretion policy three days after receiving a letter from an oil industry trade group requesting a broad waiver of environmental rules during the pandemic, according to the lawsuit. Coming Clean’s Robinson contrasted this with the lack of response that the environmental groups received when they subsequently petitioned the EPA for a rule asking companies for written notice if they take advantage of the waiver.

“If you want a waiver, we want to know. And we want to know that you need one,” said Robinson. “Then we can follow up through other mechanisms to ensure that the facilities are not, in fact, putting communities that are already at risk at greater risk by not adhering to the pollution regulations that we currently have.”

An EPA spokesperson told Grist that, though the agency does not comment on pending litigation, the new policy is a lawful and proper exercise of the EPA’s authority under extraordinary circumstances.

“As we’ve stated previously, contrary to reporting, EPA’s enforcement authority and responsibility remains active and the temporary guidance does not allow any increase in emissions,” the spokesperson wrote in an email. “This is not a nationwide waiver of environmental rules. We will continue to work with federal, state and tribal partners to ensure that facilities are meeting regulatory requirements, while taking appropriate steps to protect the health of our staff and the public.”

Michele Roberts, national co-coordinator for the Environmental Justice Health Alliance for Chemical Policy Reform, said in a statement that the Trump administration is using the novel coronavirus pandemic as an excuse to give a free pass to polluters.

A 2018 study of cumulative health hazards in vulnerable communities found that nearly 12,500 high-risk chemical facilities across the country place 39% of the U.S. population (124 million people) in constant risk of a chemical disaster. Communities of color and low-income residents face a disproportionate risk to their health and safety from these facilities, including threats from potential chemical releases or explosions and daily exposure to toxic air pollution. (The study was produced by Coming Clean, the Environmental Justice Health Alliance for Chemical Policy Reform, and the Campaign for Healthier Solutions, which works to phase out harmful chemicals in the products sold by discount retail stores.)

Many communities rely on data collected through the EPA’s regulatory process to hold industries accountable for pollution, contamination, and emissions, according to Jose Bravo, the executive director of the San Diego-based Just Transition Alliance, a national coalition of environmental justice organizations and labor unions, and also one of the plaintiffs in Thursday’s suit. This data includes everything from the type of chemicals a facility has on site to the amount of emissions produced by that facility.

“We would like to see the EPA do its job,” Bravo told Grist. “We would also like to see communities not have to worry about both COVID-19 and even stronger emissions because nobody is regulating those industries.”

While advocates like Robinson say the EPA’s reliance on self-reporting compliance data was an “honor system” that created problems even before the new discretionary policy, grassroots organizations are now concerned that the new policy could block the flow of vital information altogether for the duration of the crisis.

“[The EPA] absolved facilities of the requirement to act upon an honor system that really is insufficient, given what we know about the heightened pollution levels and the heightened disease rates and disparities that exist in communities that live on the fence line of these facilities,” said Robinson.

This policy change places an additional burden on residents in fence-line communities — so-called because they are located at or near the boundaries of industrial facilities — to step up their own monitoring efforts at a time when most have been ordered by local and state governments to shelter in place. Residents in these communities often rely on what they see, hear, and smell to track potential safety issues like chemical leaks, refinery explosions, fires, and other incidents that could endanger the health of themselves or their neighbors. The EPA’s new policy decision makes this on-the-ground monitoring more critical than ever, according to Robinson. 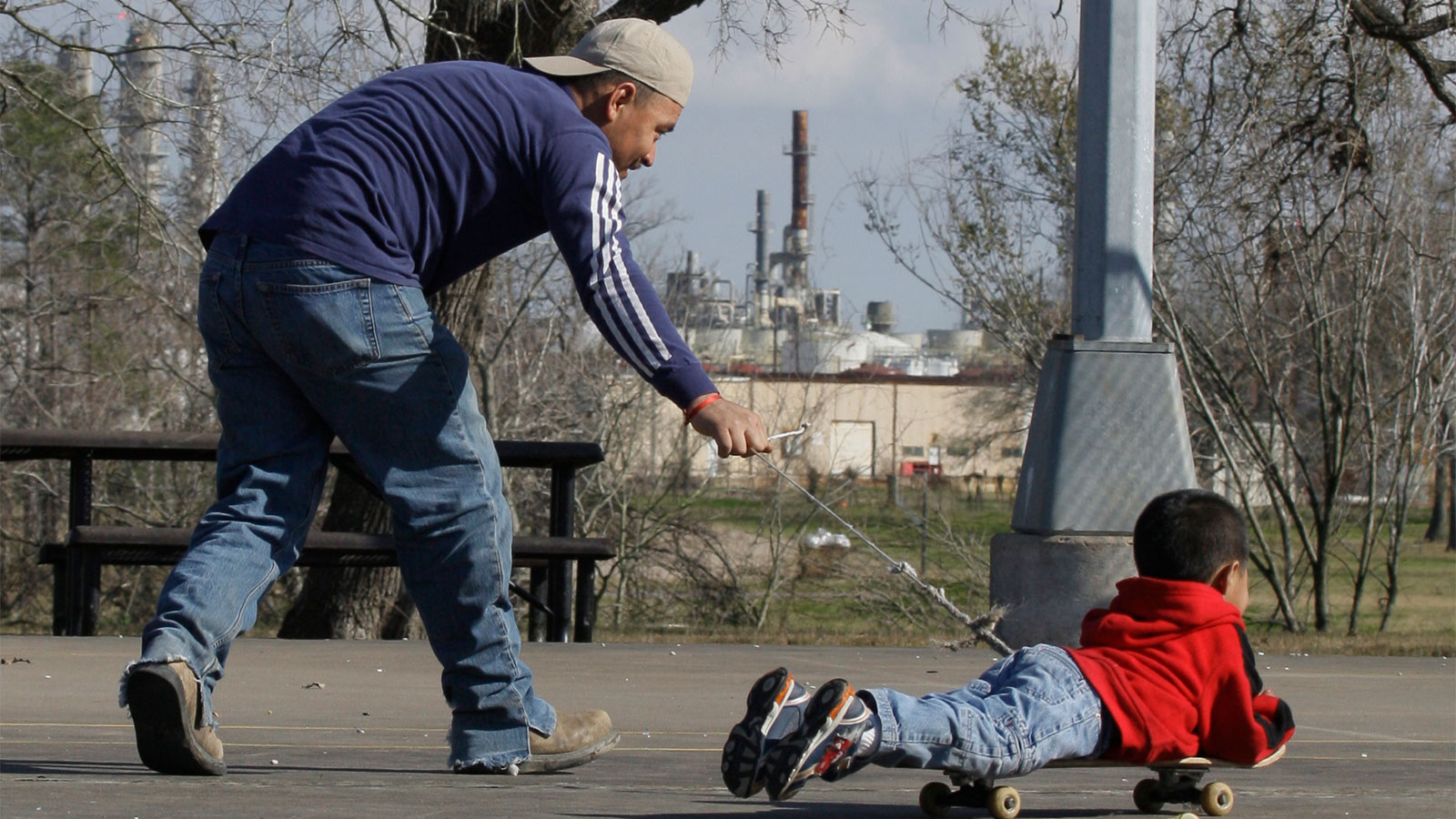 A man plays with a boy at a park across the bayou from a chemical plant in Houston. AP Photo / Pat Sullivan

In Texas, a 52-mile stretch of land from Houston to Galveston is choked with refineries and chemical plants that Juan Parras has monitored for years. As the founder and executive director of Texas Environmental Justice Advocacy Services (t.e.j.a.s.), he and his organization have worked to provide residents with the tools to protect themselves and the environment through legal action, community awareness and education, and stronger government policies and regulations. The EPA’s decision is a step in the wrong direction for these communities, he said.

In Manchester, a historically Latino neighborhood in Houston, residents are exposed to toxic air pollutants on a daily basis from more than a dozen industrial plants and facilities, said Parras. Industry is such an overwhelming presence that young children mistake smokestack emissions for clouds. Residents suffer from high rates of asthma, breathing disorders, and cancer, including a cluster of childhood leukemia cases, according to Parras.

The effects of living in polluted neighborhoods like Manchester are cumulative, putting those with weak immune systems and underlying health conditions most at risk. This is why t.e.j.a.s. has worked to strengthen policies that control emissions of air toxins. Now that Texas Governor Greg Abbott has ordered residents to stay at home and schools to remain closed until at least May 4, the coronavirus threat has created an added threat for these already-vulnerable residents.

“The children who generally go to school away from Manchester — now they’re having to stay at home on a daily basis, so [asthma] is a bigger threat to them,” said Parras.

Understanding how and if local industrial facilities are meeting federal environmental standards is important to residents in communities like these. And, according to Parras, it’s why t.e.j.a.s joined as a plaintiff in Thursday’s lawsuit.

“The EPA, in allowing this to happen, is basically going against its very core value, which is to protect human and human safety [against] industrial pollution,” said Parras. “So it’s already failing in its mission to address that. It’s not in the business of protecting industry. It’s in the business to protect communities and public health.”