Protests are taking place across the country today at the offices of the U.S. Army Corps of Engineers as activists seek to convince the agency to reject the Dakota Access Pipeline. Late last night, the Corps announced that it was still consulting with the Standing Rock Sioux Tribe about the pipeline and its route, and that while it did so, construction near or under the Missouri River was explicitly not allowed.

Among the tens of thousands of people who have joined this now historic struggle to protect the water and land of the Sioux is one young woman I met in North Dakota on Nov. 5 at Oceti Sakowin, the main camp of the self-described “water protectors.” In our talk, she revealed deep convictions and sacrifices that she has made as part of this effort, which she is in for the long haul. I found her story emblematic of the larger movement, and instructive as to why it has had such remarkable reach and staying power.

Rana is a diminutive 26-year-old from Chicago, with brown skin, brown hair, and gentle yet wary brown eyes. She is a descendent of the P’urhépecha indigenous people of Mexico. When we met, she was trying (unsuccessfully) to retrieve items taken by police during a now-infamous Oct. 27 raid that resulted in the forcible removal of the water protector camp that had been located directly on top of the Dakota Access Pipeline route. 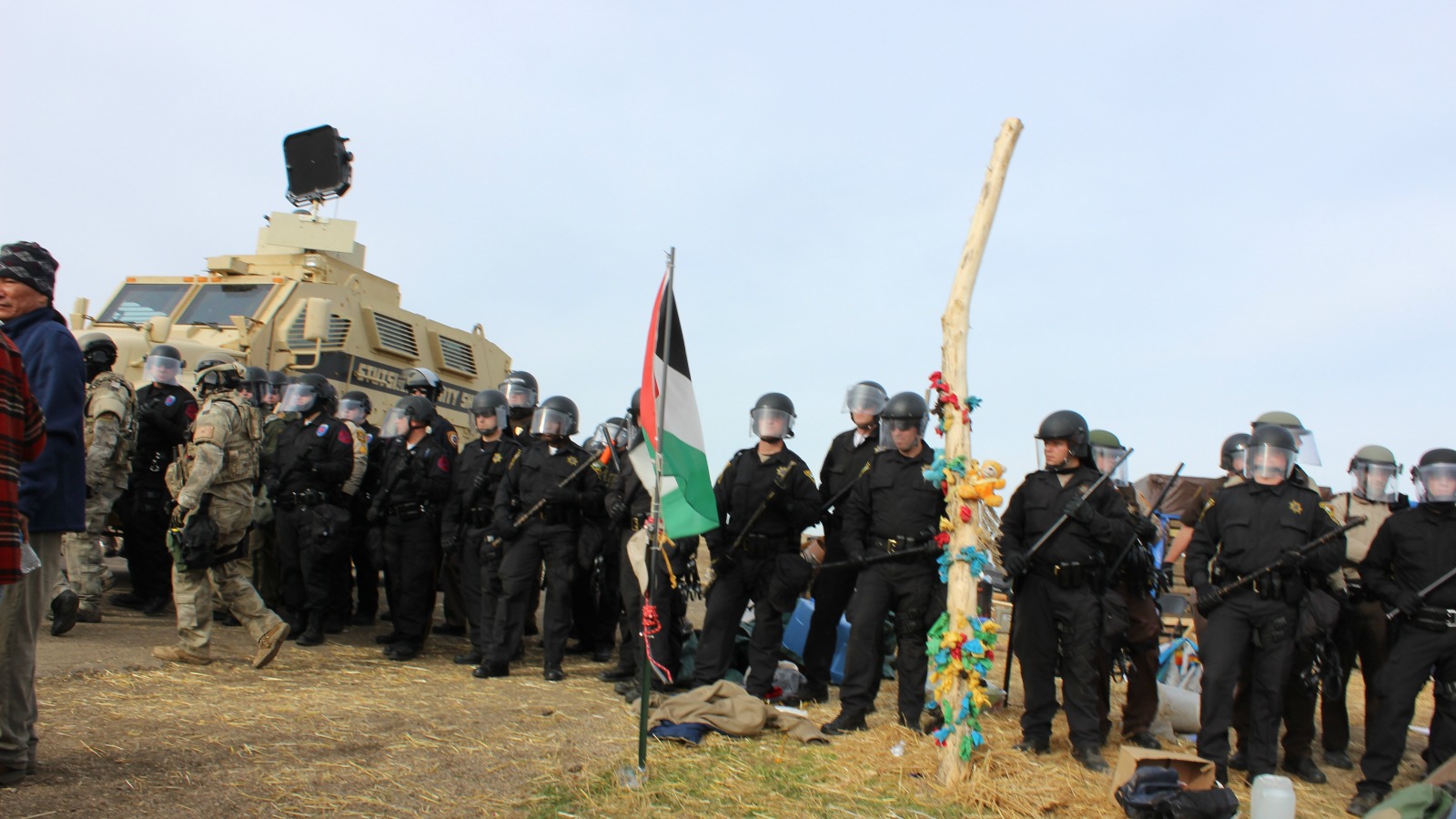 Several days after the raid, police used a large dump truck to deposit hundreds of confiscated tents, sleeping bags, and personal items into a giant pile on the side of the road south of camp. Many people, including Rana, reported that belongings had been urinated on, and some said they even saw human feces. Many of the returned items were subsequently burned.

When we talk, Rana is nervous. She is new to activism and has never been interviewed before. She’s worried that she’ll be inarticulate and “sound like a dunce,” but even more fearful for her safety. She remains on the frontlines in North Dakota and does not want either her last name or photo published. (Police have been rumored to target those identified in the press). Grist independently confirmed her identity. This interview with her has been edited for length.

On Sept. 3, Dakota Access began to bulldoze an area that the Standing Rock Sioux Tribe identified as a sacred burial ground of cultural and spiritual significance. Private security guards used dogs and pepper spray in a violent confrontation with water protectors captured by Democracy Now!

After the skirmish, a small group returned to the area to establish a makeshift camp on either side of Highway 1806, directly on land Dakota Access was preparing to excavate. Dubbed “Sacred Ground Camp” (also referred to as “Front-Line” or “Treaty Camp”), Rana had been there for over two weeks when a larger group of water protectors arrived. Four days later, on Oct. 27, a militarized police force raided and eviscerated the camp.* 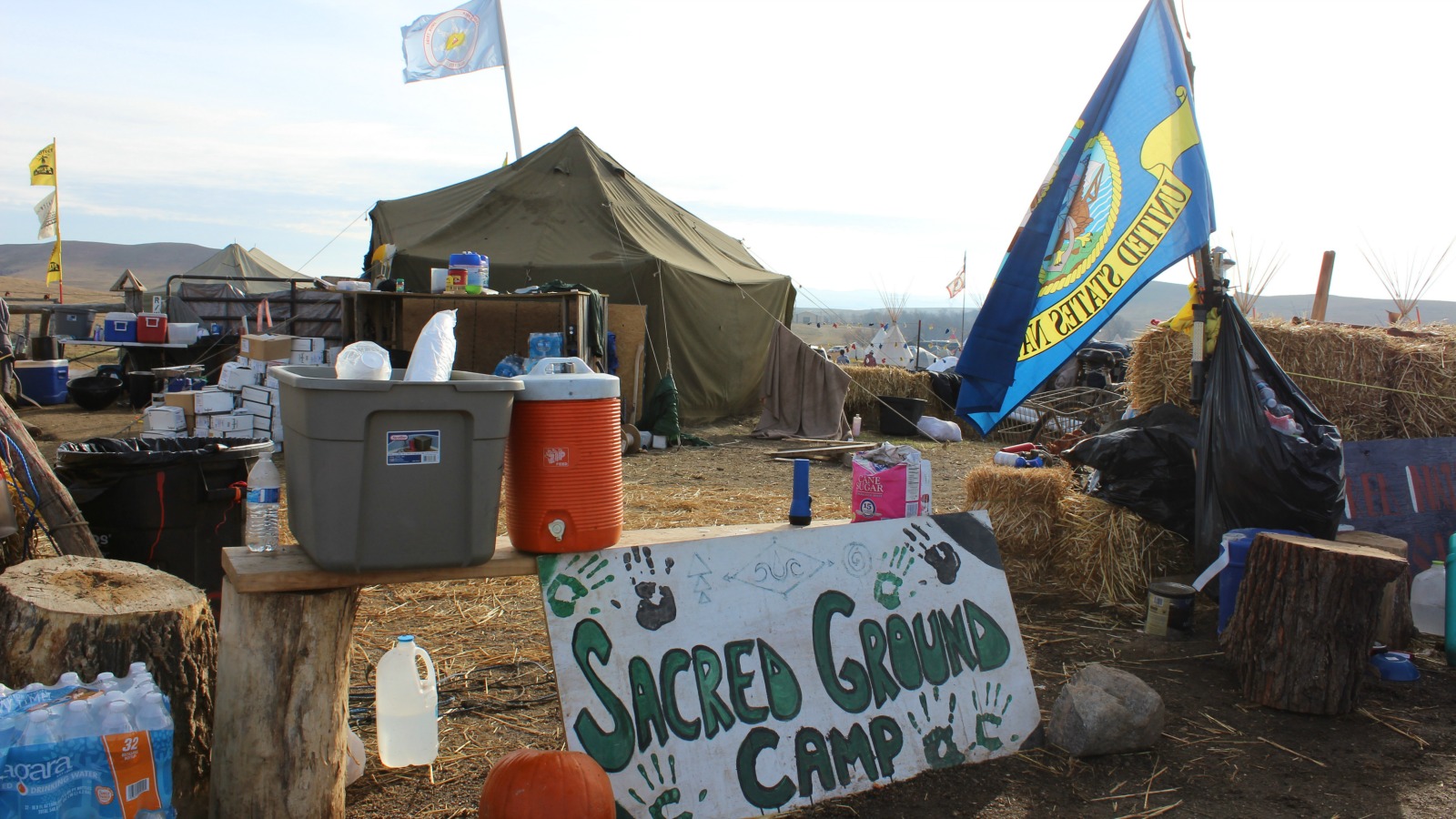 Q. What motivated you to be a part of this and to be at the riskiest location?

A. This pipeline stops in Illinois, which is my home. It’s an issue that we have in our backyard as well. I don’t think that a lot of people really grasp that concept. It’s the water that we shower with, that we brew our coffee with, that we brush our teeth with, that we cook with — everything that’s at stake.

Also, the fact that this is an indigenous-led movement, and I myself am indigenous.

Water is our first medicine. It should never be at stake, never be tampered with. When we carry our children in our wombs, they are protected by water, so water is life. You have these greedy corporations who will do anything to protect their money and oil, so when you have all that invested against you, we have to come out and help the earth as water protectors.

A. It was heartbreaking. It was infuriating. I wasn’t there from the beginning, but my friends and my companion were. They worked so hard for everything they had there. It wasn’t a big camp, but they put their all into it, their own funds, their own sweat. Of course with the donations of people, as well.

They established that camp for the sole purpose of protecting those sacred grounds so the pipeline wouldn’t go through. We were caught off guard. Then we saw the police coming closer and closer. In that moment, it was a war zone. I was so focused on staying right there on the front line, holding the front line, and helping everyone with whatever I could. They poked through our tents and they instantly fell to the ground. That’s how they left them as they moved forward.

It’s sad. I think of the police: “How can you do these things? How can you be such a lost soul?” I can only hope that they find their way. I’ve heard of officers turning in their badges. And so that says a lot.

I had some really sacred items with me. I had a shawl that my auntie gave my grandma and my grandma gave to my mother when she was carrying my little brother in her womb. My mother gave it to me, and I was supposed to carry my children in that … They took that. That really hurts … I feel like I broke a sacred knot … 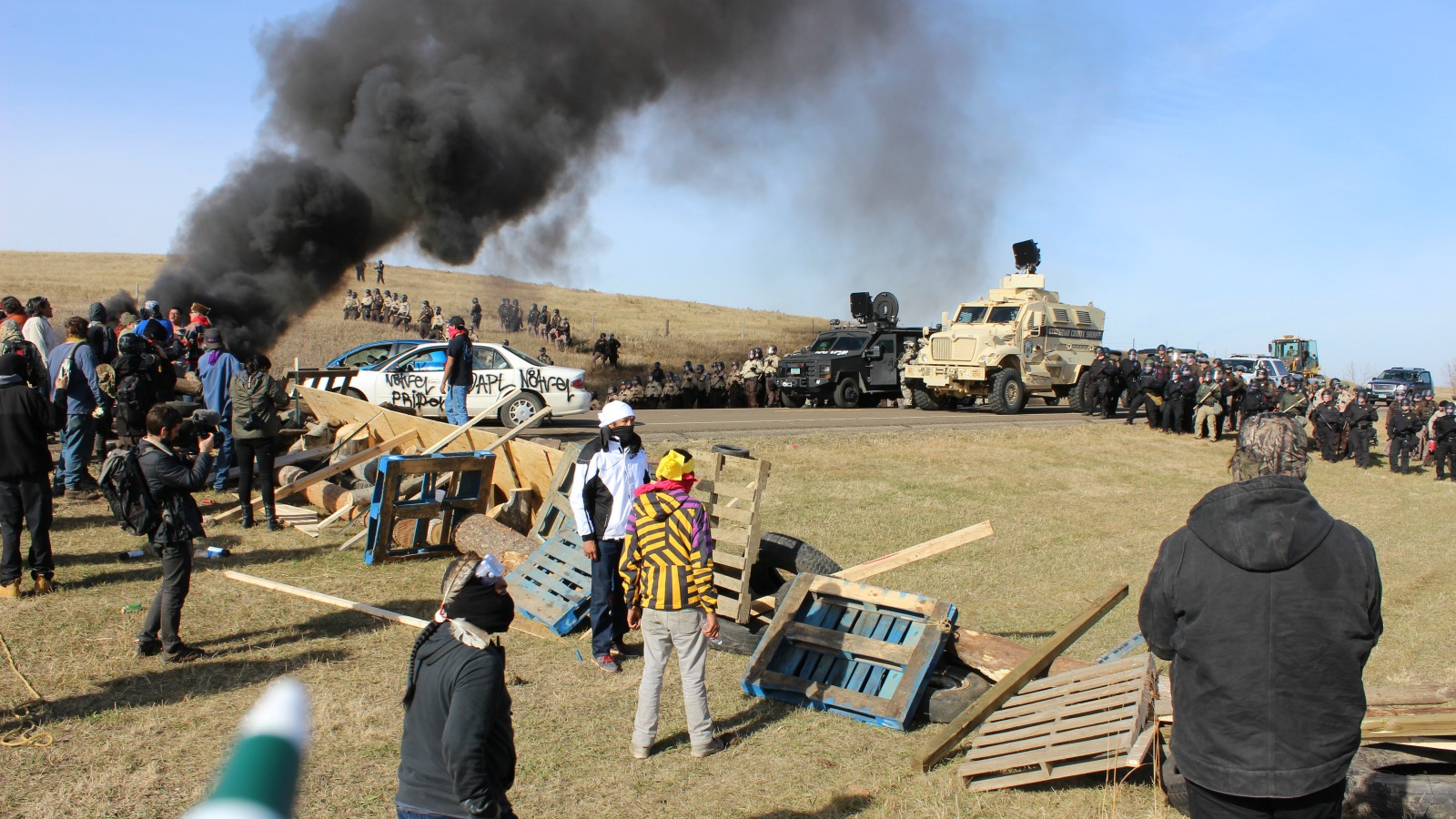 A. After the raid, a lot of us are experiencing PTSD. There was a lot of division. You could feel it. Everyone going up against each other. But now, it seems like it’s coming together again.

And now I know that we’re not going to go home. We’re not going to go anywhere until we stop this pipeline. We have a duty and it must be fulfilled. We’re just as motivated as DAPL is, you know. We’re watching them watch us, watch us, watch them. They can’t break our spirits — at the end of the day, they’re not stronger than us. We have love, we have culture, we have roots. They’re lost. The creator and the ancestors are with us — it’s a strong presence that we feel. We’re going to win this because I see people’s commitment. I for one left my job and my home.

Q.What was the job that you left to come here?

A. I was a nanny. I’m new to activism. But I knew there was always something that I wanted to do for this earth. I knew that I had that calling. I don’t have any children, so I said, “What am I doing here? There’s a battle to be fought over there! If I’ve ever called myself a warrior, this is the time to show who I am!” I’m honored to be here. To be part of history.

I want to have children one day. They deserve to be carried in a womb that’s safe and healthy for them. And, if they were to ask me, “Hey Mom, you were present during the Dakota Access pipeline, what did you do about it?” I wouldn’t be able to look them in the eye and say, “I didn’t do anything.” That would be shameful. Not a lot of people have the ability to just get up and go. I’m blessed to have that opportunity, and I wasn’t going to let it go. I’m not going anywhere. I’ve never experienced a North Dakota winter, but we’ll make it through. Our ancestors made it, one way or another. We’re going to make it. I have faith.

I’m not gonna lie. Before I came here, I was a bit terrified. I had a lot of mixed emotions. But once you get here, it all kind of just dissolves, and that empowerment takes over you and you really know why you’re here. There’s no other place I would rather be today.

*This paragraph was updated to clarify information regarding the establishment of the camp.

Antonia Juhasz writes about oil. You will find her stories in many publications, including Rolling Stone, Newsweek, Harper’s Magazine, and The Nation. She is the author of three books, most recently, Black Tide: The Devastating Impact of the Gulf Oil Spill.