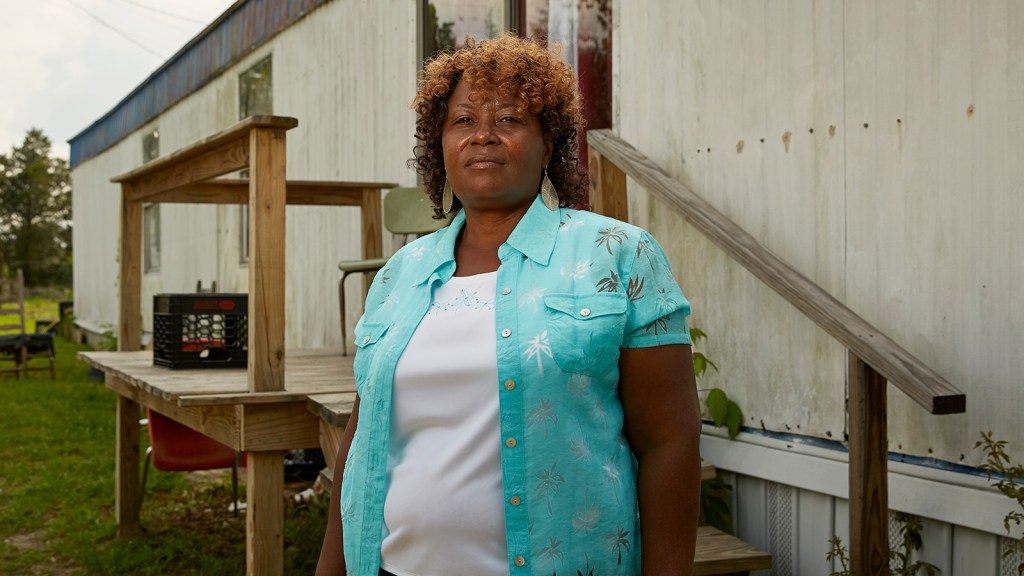 Esther Calhoun lives in Uniontown, a small town in Alabama where more than nine out of ten residents are black, and half live below the poverty line. Her family has been there for as long as she knows. Her parents and grandparents worked as sharecroppers on a plantation, and generations of her ancestors were buried in the town’s cemetery.

Uniontown is also home to the Arrowhead Landfill, a dump that draws tons of coal ash — a byproduct of burning coal — from across the country every day. A 53-year-old black woman who describes herself as a freedom fighter, Calhoun and a group of friends formed an organization, Black Belt Citizens Fighting for Health and Justice. They started a Facebook page to raise awareness about the dump and a host of other local environmental hazards, like the raw sewage spilled into Cottonwood Creek.

Arrowhead’s owner, Green Group Holdings, slapped them with a $30 million lawsuit, complaining that it had been defamed by the group’s online comments. Black Belt Citizens is trying to get the suit dismissed with the help of the American Civil Liberties Union.

Calhoun and her friends are online activists in a place where it’s a struggle to get online. They’re still learning the ins-and-outs of using email and social media, mostly working on their cell phones because they can’t afford laptops. We recently talked about her activism and what life is like in Uniontown. Here’s an edited and condensed version of our conversation:

Q. How did you come to become so active in Black Belt Citizens Fighting for Health and Justice?

A. My son was involved in police brutality — he was Tasered by local officers two years ago. At first, I didn’t know how to stand up, and nobody wanted to do anything, not just about my son but about anything that happens here. I was inspired by Black Lives Matter and by the work of Project South, which has done work here with a workshop and rally.

I had already been working on [local elections] but people don’t really want to stand up and fight around here. People are scared that if you stand up and show people what’s wrong they’ll come after you. But look, they’re coming after me now. You have to understand, this is an almost all-black town and it’s like the 1950s here. It’s a shame.

Q. How has coal ash transformed the place you call home?

A. My best friend, Della Dail, used to live in a trailer straight across from the landfill, and she used to faithfully sit on the porch because it was so hot and she didn’t even have an air conditioner. And the smell was ridiculous; it was a smell you couldn’t bear to stand. She couldn’t afford to move: She owned the trailer, but not the land it was on. She used to hang her clothes out, but she couldn’t do that anymore from the dust. There was dust all over the house. She kept having miniature strokes. I saw her whole life change. And my life changed after her life ended. I wish I could have done something for her.

People’s property has lost value. They no longer have gardens; they have health problems. The plants on the edge of the railroad won’t even grow anymore. That’s the thing. When you live in the country, you know how to survive, like having a garden and raising your food. That’s one of the things we can’t have anymore.

People talk about how the paint peels from the cars. And there’s dust everywhere, everywhere. There’s buzzards everywhere, too. I myself have neuropathy, and I’m not even a diabetic. Our town is so overburdened. It’s sickening and no one is listening. And I feel like, if this had been a rich white neighborhood, this never would have happened. Who’s concerned? Why isn’t the state doing anything? Where is the EPA? No one is doing anything because of who we are here.

Q. A lot of activists connect online. What kinds of challenges did you face trying to do that?

A. We don’t even have internet out here, especially the people living way out in the country. We don’t get a lot of education — a lot of people don’t read well. When I was growing up, granddaddy and daddy didn’t know how to read. My mom, she went to seventh grade. When I was in school, I learned how to spell words, but I didn’t know what the words really meant. And so they took advantage of us.

The EPA has certain standards, and the state has certain standards, but we weren’t educated enough to make presentations to them. We don’t even know about the internet that much. I can talk, but when it comes to the internet, I had it hard. I didn’t know how to receive an email or how to send an email. I don’t have a computer or a laptop because I can’t afford one. And most people here don’t, either.

Q. Green Group doesn’t like what you’re saying online and demanded a lot from you before the lawsuit — including handing over your cell phones for their inspection. Why didn’t you agree?

A. We weren’t ever going to agree to any of that. We’re black people, and we’ve already been violated just for being black. We weren’t going to give in to their demands. What were they doing, trying to control our lives?

As a group, we know that we are warriors. We know that we’re about truth. We know we’re about surviving. We’re not about letting people do whatever they want to us. I think they got everything wrong, and that’s because we’re poor we’re going to lay down so they can walk all over us. Deep down in the South, there’s a lot of discrimination and people taking advantage. And I think it’s time to stop this. The only thing I’m asking for is peace, justice, and the chance to live a healthy, long life. I think we need clean air and clean water to do that, whether you’re rich or poor.

Q. Did you ever think reporters would be calling you from all over the country to talk about Uniontown and your activism?

A. I was a quiet person and I never would have dreamed that I would be speaking out — not only for myself, but for my community and for everyone everywhere who’s going through what we’re going through. This is the place I inherited and I feel like it’s being violated. At the beginning, I was afraid. But speaking my truth makes it easier. I have a right to say how I feel, what I think, and how I see it. Sometimes, you gotta say ouch. And I’m saying ouch.