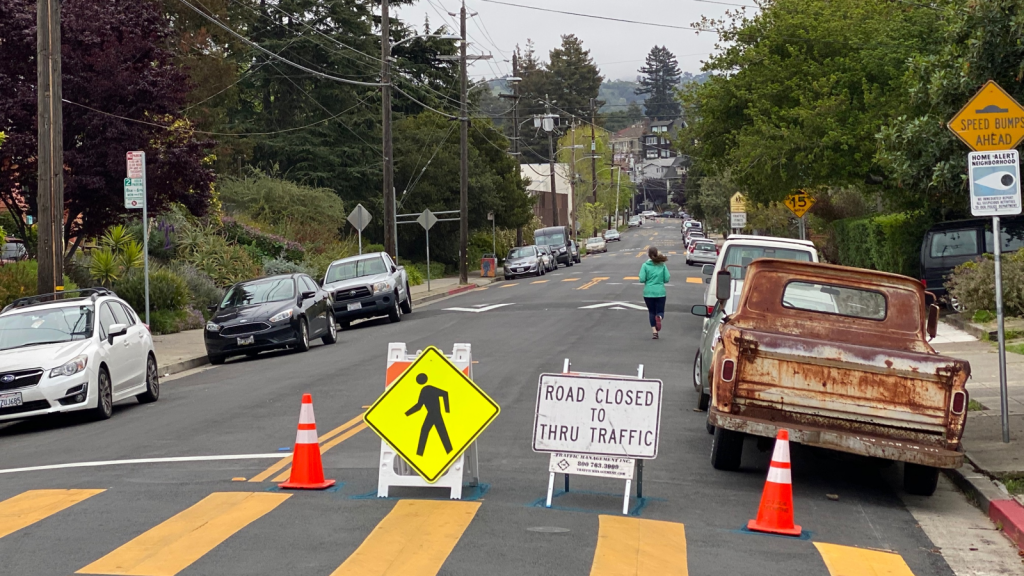 A jogger makes use of one of Oakland's "slow streets." City of Oakland
breathing room

With many residents working from home and children out of school, the city of Oakland, California, is closing off 74 miles of its streets to passing cars, making it easier for residents to run, bike, or play.

Oakland’s “slow streets” initiative, announced on April 9 by Mayor Libby Schaaf, sets aside up to 10 percent of the city’s streets for recreation. Starting last weekend with four specific intersections, affected streets will be closed to thru-traffic. A list of street closures was published by Oakland’s department of transportation.

“Because of the reduction in car traffic, we will be closing off a number of streets so that bicyclists and pedestrians can spread out and take in fresh air safely on Oakland streets, free of cars,” Schaaf said.

Like many Californians, Bay Area residents have flooded parks and local beaches since a shelter-in-place order took effect in mid-March, prompting officials to close parks to prevent the spread of the novel coronavirus.

City officials hoped the slow streets initiative — which they are calling an emergency measure — would give residents a safe way to get outdoors for Easter weekend while area parks were restricted, but Schaaf cautioned residents that the initiative does not mean public health guidance should be ignored.

“Social distancing is the only vaccine we have to fight this deadly virus,” Schaaf said.

The news was met with resounding applause from local transportation advocates.

Oakland is about to close 74 miles of streets to give people more space for walking and biking with social distance!

They’re focusing on bike boulevards – EXACTLY what we’ve asked @CityofBerkeley to do.

Oakland, CA to roll out 74 miles of slow streets for people to walk, run and bike. #OaklandSlowStreetshttps://t.co/YJQ6veJT2g pic.twitter.com/25xDwTgvFb

Schaaf asked motorists to adhere to the restrictions and be extra mindful of children on the streets, reminding residents streets will still be open to local traffic. But Schaaf stopped short of enlisting police to enforce the restrictions.

“We will not be giving out, at this time, citations,” said the mayor, adding that people have enough to worry about amid a pandemic.

Roughly 11 percent of the city’s land is made up of 6,000 acres of parks — streets and sidewalks make up an additional 20 percent to 30 percent, said a city official, adding that the city wanted to take advantage of its space for the sunny holiday weekend.

The news was especially welcome in East Oakland, a neighborhood historically overlooked and impoverished, residents said at a press conference about the initiative on April 10. Many East Oakland residents continue to work, despite the shelter-in-place orders, said one community advocate, often walking to their jobs to do so. Any effort to make streets safer is good news for the community, he said.

“Some of us have to survive and we survive by working,” he said at the press conference. “Living in East Oakland, every day is an emergency.”