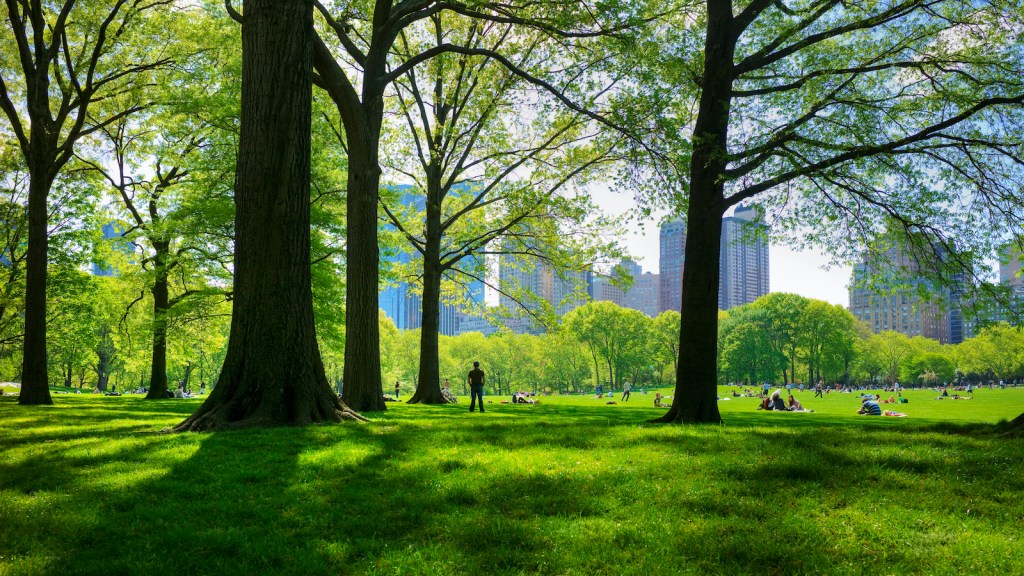 To beat summer heat — and escape indoor environments where COVID-19 is easily transmitted — city parks are a necessary respite. But new data adds to the evidence that not everyone has equal access to restorative green spaces, with large disparities linked to race and income.

A new report from the Trust for Public Land (TPL), a nonprofit focused on protecting parks and nature, revealed that public parks serving nonwhite communities are on average half the size of those serving majority-white populations, and serve five times as many people per acre.

For low-income households, nearby city parks are four times smaller and serve four times as many people per acre, compared to parks near wealthier households.

Access to cool, shady parks has been especially important this summer. June was the third-hottest ever recorded, and heat waves wracked the country in July, with one abnormally large heat dome exposing nearly 90 percent of the U.S. population to temperatures over 90 degrees F.

Meanwhile, the pandemic has led cities to scale back the capacity of indoor cooling centers, air conditioned spaces that are open to the public during heat waves. Many businesses remain closed, and unemployment is high. “There is a confluence of factors making people more vulnerable to extreme heat,” said Gregory Wellenius, a professor of environmental health at Boston University, in a statement included in the TPL report.

It’s a problem with life-threatening consequences. According to data from the National Weather Service, heat has caused more deaths over the past 30 years than any other form of extreme weather — including floods, tornadoes, and hurricanes. And nonwhite populations are disproportionately impacted.

City parks — especially those with lots of trees and dense greenery — can offer a lifeline. By providing shade and through a process known as evapotranspiration — where trees suck up moisture from the soil and release it through their leaves — parks can maintain temperatures as much as 17 degrees F cooler than the rest of the urban landscape.

Researchers in the TPL study used satellite data to analyze parks in 14,000 cities and towns across the United States and census data to consider the racial and socioeconomic makeup of communities within a 10-minute walk of each park. For majority low-income, majority high-income, majority white, and majority nonwhite neighborhoods, they calculated the community’s park size and the number of people served per park acre. The smallest parks were those serving low-income households, which spanned on average 25 acres, compared to the 101 acres for high-income demographics. Based on the researchers’ estimates, the most crowded parks were those serving nonwhite communities.

In the age of COVID-19, that means it’s even more difficult for low-income households and communities of color to practice social distancing while relaxing in their local park.

The TPL’s results build on previous research showing that green spaces are more prevalent in wealthy, majority-white neighborhoods, and that lower-income people of color are more likely to be exposed to extreme heat, mostly due to a greater prevalence of heat-absorbing buildings and concrete in their neighborhoods, as well a lack of greenery.

The study’s authors said the disparities are tied to a long history of discrimination and disinvestment in low-income communities and communities of color.

“A lot of it could be from historic redlining,” said Linda Hwang, director of strategy and innovation for the TPL, referring to the government-sanctioned practice of denying home loans and mortgages to people of color with the intent of segregating them out of the most desirable neighborhoods. In January of this year, a Portland State University study showed that a history of redlining is a strong predictor of exposure to extreme heat.

Although parks departments may not be able to create many new large parks in the densest cities, Hwang advocates greening underutilized spaces — places like vacant lots, dead retail spaces, or parking lots — to address the parks gap. The TPL also works to convert blacktop schoolyards into tree- and garden-filled, climate-friendly parks that can be accessible after hours to the public.

Other advocates for public spaces also stress the importance of increased investment in parks for low-income communities and communities of color. “This is an opportunity to see parks as essential, and not just a nicety,” said José González, founder of the community organization Latino Outdoors, in an interview with NPR.

There is also a need to pair park investments with greater support for affordable housing and education for these demographics, he added. City officials should take care to avoid “green gentrification,” where urban greening programs cause a spike in housing prices and push out the communities that were supposed to benefit.

According to Hwang, city parks have not been a priority for community investment in the past, but it may be promising that they’re drawing more interest during COVID-19.“If there’s any silver lining to this pandemic, it’s that people are really starting to appreciate green spaces in their neighborhoods,” she said. “People are discovering little pocket parks that they never knew were there.”

The current inequities in park access are bleak, she said, but this increased awareness could be a first step toward more equitable resource allocation and park improvements and investments for all.