The year 2020 seems to be drawn straight from the plot of some discarded dystopian novel — a book that never got published because it sounded too far-fetched. Not only is there a pandemic to contend with, unemployment nearing levels last seen in the Great Depression, and nationwide protests against police brutality, but it’s all happening in the same year Americans are supposed to elect a president.

Amid the chaos and tear gas, some people see a chance to scrap everything and start over, a first step toward turning their visions for a better world into reality. In Seattle, protesters in one six-block stretch of Capitol Hill, a neighborhood near downtown, have created a community-run, police-free zone, recently renamed the Capitol Hill Organized Protest, CHOP. It’s a scene of masked crowds, vibrant signs and street art, a “no cop co-op” giving away food and supplies, and newly planted community gardens. In Minneapolis, volunteers turned a former Sheraton hotel into a “sanctuary” offering free food and hotel rooms — until they got evicted.

“We’re seeing a new resurgence of utopianism,” said Heather Alberro, an associate lecturer of politics at Nottingham Trent University in the United Kingdom who studies radical environmentalists and utopian thought.

Problems like climate change, the widening gap between the rich and everybody else, and racial inequality gives many the sense that they’re living through one giant unprecedented crisis. And these combined disasters create “the exact conditions that give rise to all sorts of expressions” of utopian thinking, Alberro said. From broad ideas like the Green New Deal — the climate-jobs-justice package popularized by New York Representative Alexandria Ocasio-Cortez — to Seattle’s “autonomous zone,” people are offering up new plans for how the world could operate. Whether they came from literature or real-life experiments, these idealistic efforts can spur wider cultural and political change, even if they falter. 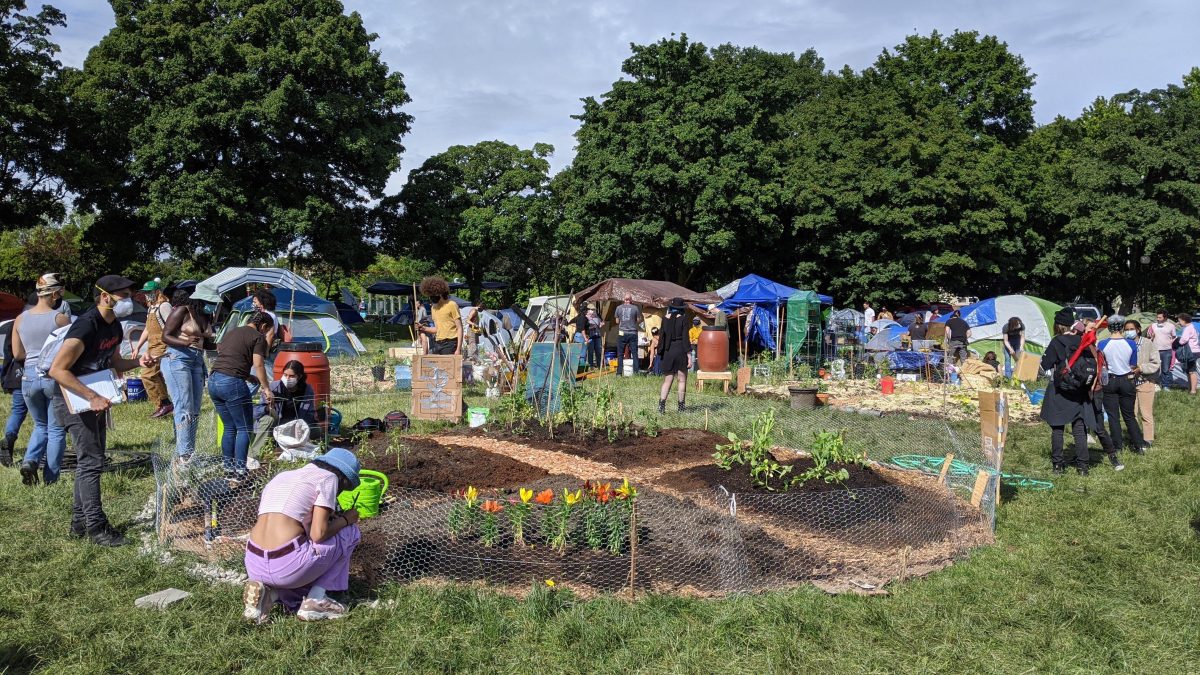 Based on President Donald Trump’s tweets about Seattle’s CHOP (or Fox News websites’ photoshopped coverage of the protest) you’d picture pure chaos, with buildings afire and protesters running amok. The reality was more like people sitting around in a park, screening movies like 13th, and making art. It’s a serious protest too, with crowds gathered for talks about racism and police brutality in front of an abandoned police precinct. The protesters’ demands include abolishing the Seattle Police Department, removing cops from schools, abolishing juvenile detention, and giving reparations to victims of police violence.

“The Capitol Hill Autonomous Zone #CHAZ is not a lawless wasteland of anarchist insurrection — it is a peaceful expression of our community’s collective grief and their desire to build a better world,” Seattle Mayor Jenny Durkan tweeted last week.

The protest zone goes by many names: Originally called the Capitol Hill Autonomous Zone, or CHAZ, it was later rebranded as CHOP. The barricaded area, which spans from Cal Anderson Park into nearby streets, is part campground, part block party. Tourists wander through, snapping photos of the street art.

A week earlier, protests in Cal Anderson Park, sparked by the deaths of George Floyd, Breonna Taylor, and others, were met by police officers spraying rubber bullets, mace, and tear gas. Then, last week, the police abandoned the area, and the protesters declared it their own, turning the “Seattle Police Department” into the “Seattle People Department” with a bit of spraypaint.

The CHAZ follows a long history of anti-capitalist experiments that reimagined the way the world was run. In 1871, the people of Paris, sick of oppression, rose up to take control of their city for a two-month stint. The Paris Commune canceled debt, suspended rent, and abolished the police, filling the streets with festivals. The French government soon quashed their experiment, massacring tens of thousands of Parisians in “The Bloody Week.” Even though it was short-lived, the Paris Commune inspired revolutionary movements for the next 150 years. 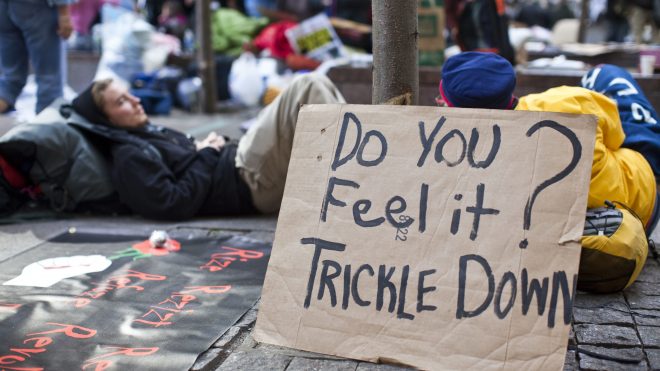 In 2011, Occupy Wall Street protestors took over New York City’s Zuccotti Park for two months to highlight the problems of income inequality. Their encampment offered free food, lectures, books, and wide-ranging discussions. The radical movement ended up changing the way Americans talked, giving them a new vocabulary — the “99 percent” and “1 percent” — and its concerns about income inequality went on to mold the priorities of the Democratic Party.

Alberro compared Seattle’s CHOP to a community of 300 environmental activists in western France who set up camp at a site earmarked for a controversial new airport starting in 2008. One of many ZADs (zones à défendre) that have sprung up in France, the community ended up being not just a place to protest the airport, but to take a stand against what protesters saw as the underlying problems — capitalism, inequality, and environmental destruction. (The government ended up shelving plans for the airport in 2018). “The point of these autonomous zones is not only to create these micro exemplars of better worlds,” Alberro said, “but also to physically halt present forces of destruction” — whether that’s an airport or, in the case of Capitol Hill, how police treat black people. 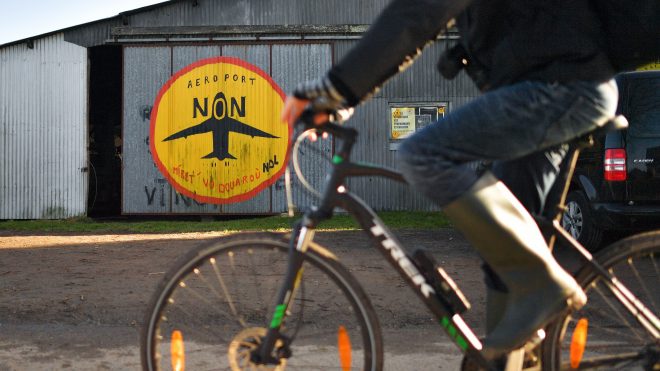 A bike rides past a farm in “la Zad,” a utopian community protesting an airport in Western France. LOIC VENANCE / AFP via Getty Images

Seattle has a lengthy history of occupations and political demonstrations tracing back to the Seattle General Strike in the early 1900s. The Civil Rights era brought sit-ins and marches. Indigenous protesters occupied an old military fort in 1970 and negotiated with the city to get 20 acres of Discovery Park. Two years later, activists occupied an abandoned elementary school in Beacon Hill, demanding that it be turned into a community center (now El Centro de la Raza).

And it might not be a coincidence that the new protest zone appeared on the West Coast, often portrayed in literature as an “ideal place” to set up utopian communities, Alberro said. For instance, the book Ecotopia, published in 1975 by Ernest Callenbach, depicted a green society — complete with high-speed magnetic-levitation trains! — formed when northern California, Oregon, and Washington seceded from the United States. The book went on to become a cult novel, influencing the environmental movement’s focus on local food, public transportation, and renewable energy.

Ecotopia isn’t exactly an ideal parallel for the current wave of protests, as its utopia was white. Callenbach envisioned a segregated society where black people opted to live in the less affluent “Soul City.” Still, it’s apparent that some of its other messages live on. Alberro has talked to many “radical” environmental protesters for her research, and most of them haven’t read any of the green utopian books she asks about. But they repeat some of the ideas and phrases from that literature nearly “word for word” when describing the changes they want to see in the world.

Though Seattle’s protest zone is focused on racial oppression, not environmental destruction, Alberro sees a similar impulse behind all these projects. “Many activists would argue that it’s all part of the same struggle,” she said, arguing that people can’t successfully take on environmental issues without addressing racism and other socioeconomic problems. “There seems to be a cultural atmosphere that molds these different movements, even though they often don’t come into contact with one another.”