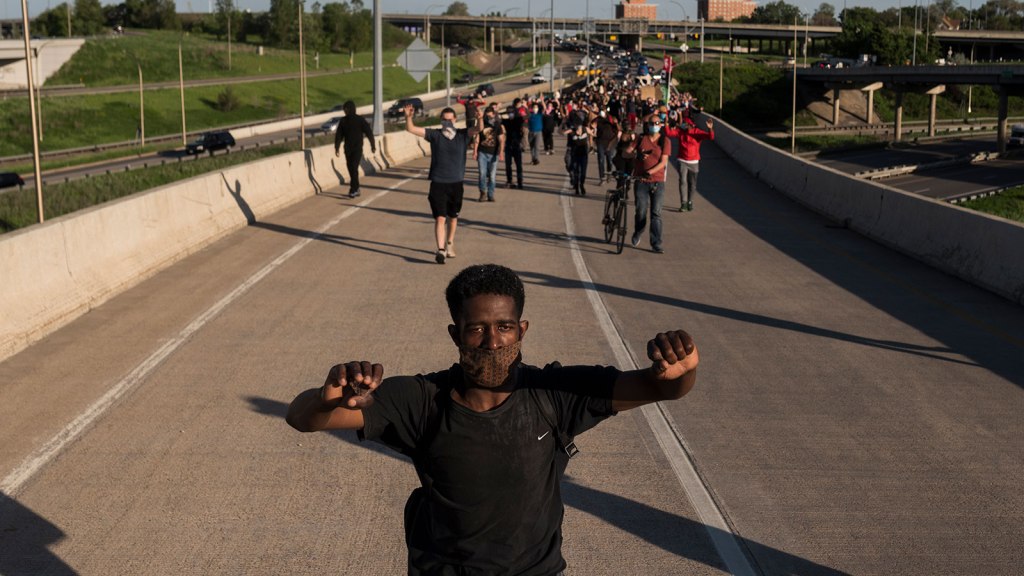 The Minnesota legislature has spent the last five years preparing for the kind of protests that have rocked the city over the past week in the wake of the police killing of George Floyd — by attempting to criminalize them.

From 2016 through 2019, state lawmakers introduced ten bills that either made obstructing traffic on highways a misdemeanor or increased penalties for protesting near oil and gas facilities. Most of these legislative proposals were introduced in response to ongoing protests against a controversial oil pipeline as well as those following the police killing of Philando Castile in a St. Paul suburb in 2016. The bills would have allowed protesters to be jailed for up to a year, fined offenders up to $3,000 each, and allowed cities to sue protesters for the cost of police response. Many of the bills were introduced in 2017 after racial justice activists in the state made headlines shutting down a major highway. A couple others were in response to protests in 2016 and 2019 against the energy company Enbridge’s planned replacement of a pipeline running from Alberta to Wisconsin.

None of the bills have yet become law, but three failed only because they were vetoed by the governor. Two bills introduced earlier this year are still on the table. One would make trespassing on property with oil and gas facilities punishable by up to three years in prison and a $5,000 fine. The other would make those who assist such activity civilly liable for damages.

Over the past half-decade, a wave of bills that criminalize civil disobedience has swept state legislatures across the country — particularly those controlled by Republican lawmakers. According to a new report by PEN America, a nonprofit advocating for First Amendment rights, 116 such bills were proposed in state legislatures between 2015 and 2020. Of those, 23 bills in 15 states became law. While there is no comprehensive count of the number of people arrested and prosecuted under these new laws, activists protesting oil and gas activity have been charged with felonies in Houston and Louisiana.

This year alone, four states — Kentucky, South Dakota, West Virginia, and Utah — passed laws that increased penalties and charges for either interfering with oil and gas activity or disturbing meetings of government officials. (Interfering with oil and gas activity may include obstructing the construction or operation of pipelines and other “critical infrastructure.”) As of May, 12 other bills are pending in various state legislatures — all of them introduced before the past week’s unrest. If passed, these bills would increase disciplinary sanctions for campus protesters, classify trespassing on property with oil and gas infrastructure a felony, and expand the definition of rioting, among other things.

“Protest, in the last several years, has absolutely been followed by efforts by state legislators to criminalize the very activity practiced in the mere months prior,” said Nora Benavidez, director of the U.S. Free Expression Programs at PEN America. “There is this larger narrative that is being cast that protest needs to be narrowed — and the definitions around what constitutes acceptable protests are becoming smaller and smaller.”

Benavidez found that, in the years prior to recent large-scale protests and the 2016 election victories of conservative state legislators, proposals chipping away at constitutionally-protected protest activity were few and far between. In 2015 and 2016, only six bills narrowing the rights of protesters were introduced. But in 2017 — in the wake of nationwide protests over the police shootings of Philando Castile and Alton Sterling, protests against the Dakota Access pipeline, and marches responding to President Trump’s election — that number rose to 56.

Lawmakers who supported such bills weren’t shy about their intentions. In 2018, Minnesota state senator Paul Utke — the main sponsor of a bill that would have made training, hiring, or counseling those who end up trespassing on property with a pipeline a felony punishable with up to ten years in prison and a $20,000 fine — pointed to the Dakota Access Pipeline protests as a reason for the bill. “We saw what happened in North Dakota and we have a big pipeline project coming up [in Minnesota],” he said.

Only two such laws have been challenged in court. South Dakota’s “riot-boosting” law, which allowed the state to sue protesters for damages, was found unconstitutional in 2019 because it was created in anticipation of protests against the Keystone XL pipeline. Earlier this year, however, lawmakers passed a new version of the law, which has not yet been challenged in court. Litigation against a similar law in Louisiana is pending.

Benavidez said she expects to see many more bills curtailing the right to protest in the coming months.

“The long-term and sustained ways to target certain groups comes not just from moments like this but in the months that follow,” she said. “Even if protests die down, the need to be ready to challenge some of these proposals is going to be really necessary.”