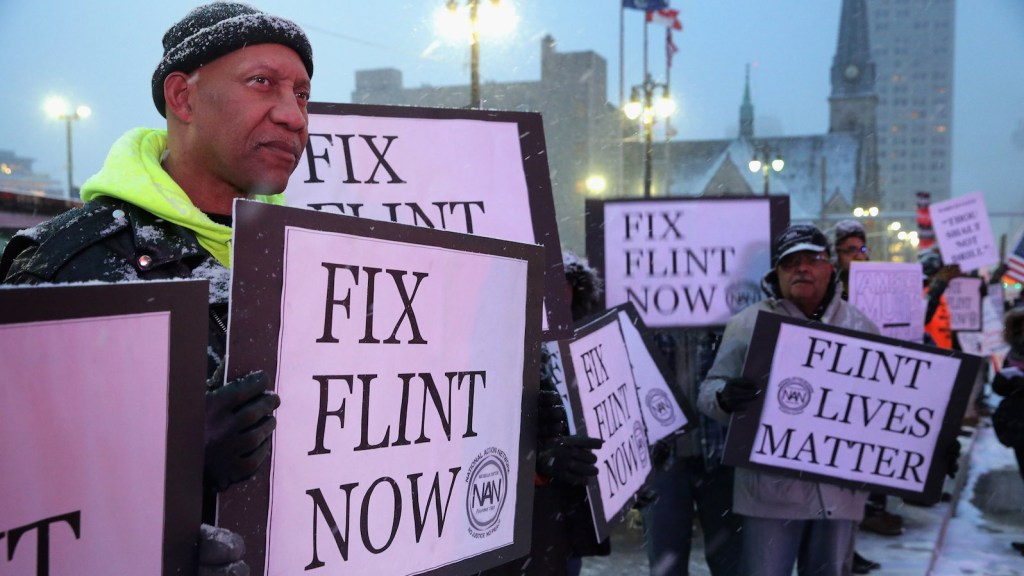 This story was originally published by ProPublica.

When I first heard E. Yvonne Lewis tell the story, it was a hot July day in downtown Flint, Michigan. We and about 70 others had gathered in the high-ceilinged ballroom of the Northbank Center, just west of the river, where the Michigan Civil Rights Commission was conducting its 2016 hearings on how this Great Lakes city learned that its own water was a threat.

Lewis, a community health worker and mother of three, testified that she kept a Crock-Pot in her bathroom. To take a bath, she filled the cauldron with bottled water, waited for it to heat, poured it into her bathtub, then repeated this process until she had enough to wash.

The image of the slow cooker in her bathroom haunts me, one of many such stories I heard while writing a book about the crisis in Flint, where toxic water was delivered to a city of nearly 100,000 people for 18 months before the state acknowledged the problem. As I sat for hour after hour, trying to put words to these experiences, I struggled with the fact that there was no ending. My book couldn’t conclude with a rousing sense of wrongs righted and justice served. Not only had no one been held accountable, but the true toll of the crisis for both the city and its inhabitants would not be known for years, maybe decades.

“People are dead,” Lewis said when I spoke with her last weekend. “Children are ill. We still don’t know the long-term implications of the exposure.”

This ambiguity stands in contrast to recent news that suggests Flint’s story is headed for resolution. On Thursday, a federal judge granted preliminary approval of a $641 million class-action settlement in the case, believed to be the largest in state history. It will provide for “every person exposed while a minor child; every adult exposed with a resultant injury; every residential property owner, renter, or person responsible for paying Flint water bills; and certain business owners,” according to the decision. That ruling comes exactly a week after nine public officials, including former Gov. Rick Snyder, were indicted on 42 counts of wrongdoing involving their alleged roles in the water crisis. All nine have pleaded not guilty.

Criminal charges and a class-action settlement may seem like the last chapter in Flint’s story, which has already begun to fade in public memory. But much of Flint’s unfinished business lingers, including policies that lie at the root of the crisis.

The problem with Flint’s water began when a state-appointed emergency manager decided to leave Detroit’s water system. In 2014, while awaiting the construction of a new regional system, officials rebooted the city’s old treatment plant and used the Flint River as a water source. But the plant did not get the resources to properly treat the water. Most seriously, the water did not receive corrosion control, as required by federal law, causing pipes to break down. Brown water coming out of taps: that was corroded iron, or rust.

Despite escalating concerns from residents, boil-water advisories and other red flags (the water so badly corroded machinery at a General Motors plant, the company switched to another city’s water system), it took large-scale organizing for a year and a half before the city returned to Detroit’s water system. By then, people had been exposed not only to high amounts of lead, a neurotoxin that is especially damaging to children, but a series of bacterial outbreaks. A Legionnaires’ disease outbreak officially sickened 90 and killed 12. As Frontline documented, the number of those harmed by the outbreak is likely more.

To address the heart of the crisis, though, you have to look beyond a courtroom. Nearly five years after Snyder’s own investigative commission cited Michigan’s emergency manager, or EM, law — which hands total political authority over a city or school district to state-appointed officials — as a contributing factor in the water crisis, the law remains on the books, unchanged. That is despite some unsuccessful legislative efforts to turn the position into a three-person board and to add some limits to its authority. Two of the four people who formerly held that post are among those charged in last week’s indictments. While the state has not had an active emergency manager since 2018, ending an 18-year streak, the law’s defenders argue that it is a necessary tool, pointing to the one who steered Detroit through America’s largest municipal bankruptcy. But Peter Hammer, director of the Damon J. Keith Center for Civil Rights at Wayne State University Law School, disagrees.

“It is tragic and reprehensible that the EM law has not been repealed in Michigan,” he said in an email, arguing that its provisions have disproportionately affected the democratic rights of Black communities. “It is not enough that the measure has not been used in the past few years, it must be removed. The dangers are even greater with looming crises in municipal finance in the wake of the Covid pandemic.”

Michigan is also one of only two states that exempts both the governor and Legislature from open records requests, a fact that delayed or denied access to critical information on the decisions made about Flint’s water. After years of effort, the most recent push for bipartisan legislation that would make Michigan’s government more transparent died after the Senate Oversight Committee failed to send it to the full Senate, even though its chair, Senator Ed McBroom, a Vulcan Republican, was one of the bill’s co-sponsors. Both he and Senator Jeremy Moss, a Southfield Democrat, the other co-sponsor, said the bill was scheduled for hearings in March, but it was delayed by the COVID-19 pandemic and then later ran out of time as other issues took the Senate’s attention: McBroom pointed to criminal justice reform; Moss to allegations of perceived election fraud. Both also say they expect transparency legislation to be reintroduced in 2021. “I think the need is as clear as it’s ever been,” McBroom said.

Nationally, in the first update of the Lead and Copper Rule since it was adopted in 1991, the Environmental Protection Agency developed testing requirements for water at schools and child care centers, and requires public inventories of millions of lead service lines that remain in America’s drinking water systems. But the new guidelines slow down the replacement of those lines, with the new standard calling for a 3 percent annual replacement rate for water systems that show especially high levels of lead, rather than the previous 7 percent rate. In a fact sheet, the EPA said the new rule is more effective because it closes loopholes that left the previous standard unmet. But many advocates are disappointed. The Natural Resources Defense Council, an environmental advocacy law firm, has sued the EPA, with a top official in the organization asking, “Have we learned nothing from Flint?”

More broadly, the chronic disinvestment in communities like Flint has deepened their precariousness. It even worsened the water crisis. People and businesses fled Flint, leaving the city with fewer than half the taxpayers it had in 1960, but the water system remained as massive as ever. This led to unaffordable rates and water sitting stagnant in corroding pipes, making it more vulnerable to contaminants.

Even the steps taken to address the wrongs done to the people of Flint aren’t as clear-cut as they appear. The charges filed last week are the second attempt at prosecutions; the first effort was scrapped by new lead prosecutors who promised to build stronger cases. Several of the defense lawyers not only claim prosecutors have failed to make those cases, but they strongly decry the secretive one-judge grand jury process that led to the charges, a system unique to Michigan and rarely used in the state.

The pending $641 million class-action settlement may be the largest in the state’s history, surpassing the $500 million allotted two years ago to gymnasts abused by Dr. Larry Nassar. But, given the huge size of the class (to say nothing of attorney fees), it may not result in much for any individual. For all that the city has lost, 95,538 people still called Flint home as of 2019; in comparison, the Nassar settlement involved 332 survivors. Some residents have protested the terms of the settlement, saying that compared with what they endured, it isn’t enough. A number of other lawsuits, including a negligence suit against the EPA, are still pending.

Despite all that remains undone, Flint’s legacy has inspired some promising change, with implications that go far beyond the city borders. Michigan has strengthened its water testing, setting a higher standard than the federal minimum. It also mandates that every community in the state replace its lead service lines. Because of a 2017 legal settlement with the state, Flint had a head start. Nearly 10,000 of the city’s lead lines have been replaced as of late December (but not yet all of them). The state also created the new Office of the Environmental Justice Public Advocate to better respond to concerns about inequitable treatment.

Many residents have drawn on lessons from the water crisis to build new models for democracy and public health. Their work includes an innovative program where community members help develop, vet and carry out research proposals from academics, bringing transparency along the way; a water lab in a refurbished school where residents, including young people, work with scientists to test their own drinking water; and an environmental justice movement, with teachings on using data and community organizing to rebuild crumbling infrastructure.

“One of the things I think we’ve learned in our work is that component is absolutely essential to doing things the right way — not just engagement but collaboration,” said Benjamin Pauli, author of Flint Fights Back: Environmental Justice and Democracy in the Flint Water Crisis. His family, including two young children, were exposed to the water.

The story of Flint goes on, and on. There are days I wish I could sneak into bookstores, find copies of my book, The Poisoned City, and staple addendums to the back cover. But when I was writing the book and still today, it comes down to the same thing: learning to accept the reality of all that’s uncertain and incomplete, without losing clarity on the truth, or the worth of Flint’s people.

It’s not just theory; it’s personal. Lewis is talking with her adult daughter about how the water crisis might affect her ability to have a healthy pregnancy — and child. She is thinking about what her own life will be like as she ages. Every single physical or mental ailment in the decades to come, she said, will have her asking: What if …?

“In the back of my mind,” she said, “there’s always one question — the impact of that exposure.”

In the most intimate of ways — in the bodies of those who experienced it — the water crisis goes ever on.

ProPublica is a nonprofit newsroom that investigates abuses of power. Sign up to receive our biggest stories as soon as they’re published.