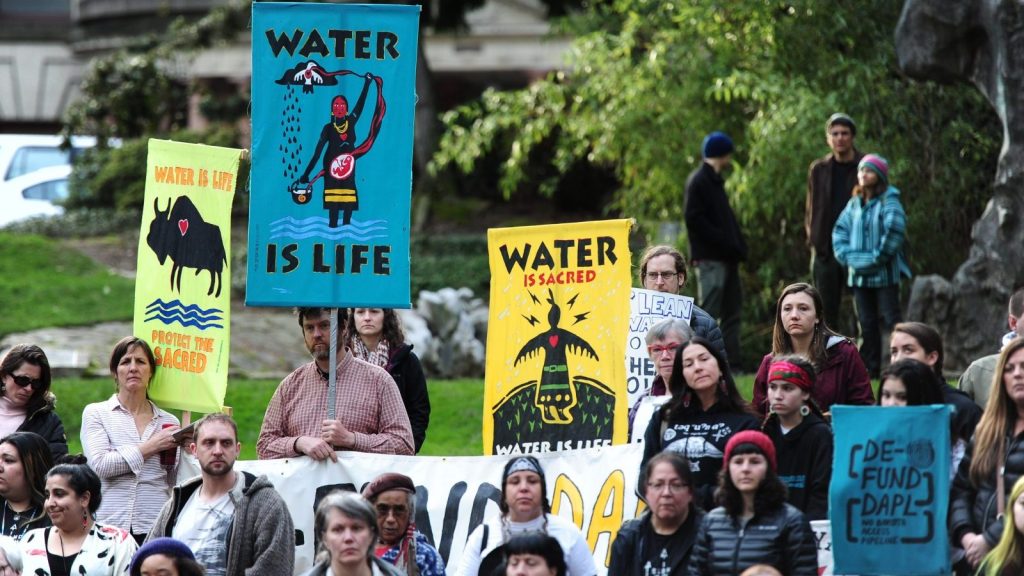 Here’s a bit of good news for a change: On Wednesday, a federal court issued a major ruling in favor of the Standing Rock Sioux Tribe’s legal challenge to the Dakota Access Pipeline. The D.C. Court of Appeals found that the Army Corps of Engineers violated federal law in giving the pipeline a permit to cross beneath the Missouri River, at a spot just north of the Standing Rock Indian Reservation, whose residents say the pipeline poses an ongoing threat to their drinking water, sacred sites, and way of life.

“This decision vindicates everything we have been saying,” Dallas Goldooth, a grassroots organizer with the Indigenous Environmental Network, tells Mother Jones. “Indigenous expert knowledge cannot be ignored. The fight to keep fossil fuels in the ground cannot be ignored. This is a huge win, not just for the Standing Rock and Cheyenne River Sioux Tribes, but for the hundreds of other nations fighting extractive projects on their lands.”

Completed in 2017 despite a months-long national protest movement led by the Standing Rock Sioux and other indigenous nations, the Dakota Access Pipeline currently pumps over half a million barrels of oil per day from North Dakota to Illinois, a volume that its operator, Energy Transfer Partners, is presently seeking to expand. Though federal permits for the project were rejected by President Obama in December 2016, that decision was almost immediately reversed by President Trump upon his taking office, when he directed the corp to issue the pipeline a permit.

In 2017, the Standing Rock Sioux Tribe sued to have the permit overturned, on the basis that the pipeline’s impacts had never been properly evaluated under the National Environmental Policy Act, a landmark environmental statute that the Trump administration has proposed to gut. The D.C. Court of Appeals then directed the army corps to reevaluate the project’s potential harms, such as would result from the oil spills and leakages that are known to occur with this type of pipeline.

The corps submitted its revised analysis to the court in 2019, but the tribe and its lawyers challenged its adequacy, saying that their concerns and expert advice had been shut out of the process. Judge James Boasberg agreed. With Wednesday’s ruling, the court has sent the army corps back to the drawing board once again, stating that the corps failed to address “expert critiques” regarding the possibility of disastrous spills and directing them to redo their assessment as a more thorough “environmental impact statement,” a process that could take months, if not years, to complete.

The tribe has asked the court to stop the pipeline from operating in the meantime. Once the environmental impact statement is complete, the army corps will use the new information to decide whether to revoke Energy Transfer Partners’ 2017 permit. Given the influence of the Trump administration, however, the corps is likely to uphold the permit regardless of the new information — in which case the tribe would take them back to court, asking a judge to make a final ruling on the future of the pipeline.

Earthjustice attorney Jan Hasselman, who represents the Standing Rock Sioux, says he hopes that won’t be necessary. If this latest environmental review drags into next year, a newly elected Democratic president could flip the army corps. “We have no reason to believe that the Trump administration will do the right thing by Indian Country,” he says. “But under a new administration, our hope is that the decision will be to reject the permit and stop this pipeline.”

During the primary, several major Democratic candidates signed a pledge to revoke the permits for both the Dakota Access Pipeline and the Keystone XL Pipeline, which is currently under construction after being fast-tracked by Trump. Democratic frontrunner Senator Joe Biden has yet to make this pledge, but Hasselman is optimistic that Biden’s administration would include some of those who have.

In a statement, an industry group called Grow America’s Infrastructure Now said the Wednesday ruling was “stunning” for its challenge to the regulatory status quo. “The Dakota Access Pipeline is already the most studied, regulated, and litigated pipeline in the history of our country and has been safely operating for nearly three years,” the group said, adding that this ruling puts their ability to build more oil and gas infrastructure “in potential peril.”