For a quick explainer on how to buy better, watch our video; and for an examination of the role that sustainable clothing initiatives really play in changing the garment industry, read this piece.

I first got to know Bree Hylkema on a camping trip. The rest of the group was kitted out in so much outdoor-performance gear that it looked like we just dropped out of an REI catalog. Hylkema emerged from her tent in a wool cable-knit sweater, jeans, and vintage knee-high Frye Campus boots. I was alarmed. Where was her tactical adventure clothing? Then she proceeded to out-hike all of us.

We soon became friends. Hylkema thought more about clothing than anyone I knew. I wasn’t surprised when, a few years later, she started her own clothing company, Vermeulen & Co., with Kyra, a friend from her days working in the costume shop of the American Conservatory Theater.

I also had my doubts that Vermeulen & Co. would last, though I kept them to myself. The resurgence of small-scale manufacturing in the Bay Area was much hyped, but the most widely lauded examples of sewing-based businesses were basically just rectangles: iPad cases and messenger bags.

It was good that I kept my mouth shut. Vermeulen & Co. thrived. They joined a fashion incubator run by Macy’s. When I visited Hylkema then she was reverse-engineering vintage jackets in the former executive suites of Macy’s West, a modernist, wood-veneered ’60s time capsule that looked like the set of a post-apocalyptic version of Mad Men. Our conversations expanded from love drama and work drama to include things like textile weave and global cotton shortages.

When Grist decided to do a series of stories on fast fashion, I immediately thought of Hylkema, who has now spent five years building a clothing business that is exactly the opposite of fast. What is slow fashion actually like, not as an ideal, but from the business end of things? The following is an edited and condensed version of our conversation. 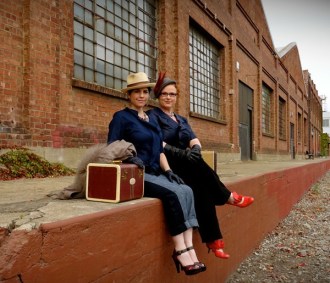 Q. So, let’s begin at the beginning. How did you decide to start your own clothing company?

A. Kyra and I are not the same size, but we had the same problems when we were looking for clothing. It was not fitting us in the same ways. Tailoring for curvy women requires darts [cuts to the fabric to make it fit better], and darts are more expensive.

Women like us should have more options. They should be able to wear button-down shirts. Vivienne Westwood says, “You have a more interesting life when you wear impressive clothes.” I think that’s true.

Q. So that’s one reason why so much of the clothing that is in stores is for stick people? It’s easier to design clothing for a stick body?

A. Yes. Or to make it stretchy. If you go into a plus-size store today it’s all stretchy fabric because it’s easier to make something stretchy than it is to put in a dart.

Also, tailored clothing doesn’t have as much hanger appeal. If something is flat, it lays nicely on the hanger. Something with a lot of curves doesn’t fit as nicely on the hanger because — surprise — your hanger is a different shape than your body. You have to put it on to make it look good.

Q. I know you’ve spent a lot of time looking into sustainable textiles. Is there a certain degree of marketing hype around that, in your experience? Do textile companies front and pretend to be more eco-friendly than they actually are?

A. We had an intern whose sole purpose was to call our fabric suppliers and find out more about where the fabric comes from, how they figure out whether it’s truly what they say it is. They’re not growing it themselves after all.

But they won’t give us that information. If I were a big company, like Eileen Fisher, maybe I could get it. The supply chain is so complicated. Cotton all over the world can wind up mixed together in one mill. Your T-shirt probably has cotton from eight different countries in it.

There are exceptions. There’s one company called Lenzing that is very transparent about their process. We really love working with their fabric — it’s soft, it’s breathable, it’s drapey. We feel good about using it. It’s not a perfect solution. None of it is. It’s a better solution.

Q. So, when people write about “locally made” textiles in San Francisco, they tend to think accessories like messenger bags. What I didn’t realize is that San Francisco still has a garment industry.

A. The messenger bag companies, their message is “Hey, we make this here, and we are going to talk about that loudly.” Tons of clothing are made here, but it’s an invisible industry. There are no storefronts. They are often not online. You just have to know that if you walk into this building on Market Street and up to the fourth floor and walk through this hallway and knock on that door there are 40 people sewing clothing in there.

If you look at what they’re making, though, it’s a lot of T-shirts and stretchy stuff. Those are things you can make more cheaply. You can just pay a few dollars to have it made, and sell it for $50.

As a local manufacturer I’m always trying to find out who has what machine that can do special things? What can and can’t we do here? And is that ever going to be cost-effective?

Once, when we were at the Macy’s incubator, they had a machine that could do a blanket stitch. We planned a whole garment around it. It was an old machine, from the ’70s. We tried to have it repaired but could never get it to work. It would go for a few minutes and then stop.

If you go and ask the places that do specialty work, they tell you, well, they have that machine, but it’s put away in storage and they don’t really want to do it and they want to charge you a bunch for it. It’s hard to do local manufacturing at smaller quantities while also doing something interesting. Not impossible. But hard.

Q. How sustainable is the remaining garment industry as a business?

A. I don’t know that there’s a new generation of people who are going to work in these local factories. They’re not full of young people. In the Bay Area a lot of them are from China, and a lot of them did work in manufacturing there. They are already skilled. They often don’t speak English well, and so their other employment options are limited.

The problem is no one’s learning how to do it.

Q. How do you figure out what fabric to use?

A. A lot of it is trial and error. We wear our garments around and troubleshoot them before we release them. With our sailor pants, originally they had three buttons on either side. But we discovered that you couldn’t really get your hands into your pockets. Now there’s still a button, but it’s just sewn onto the front of the pant without a buttonhole. We didn’t do that to save money – we did it for functionality. Stuff like that. Little things.

Q. Do people ever balk at the price of your clothes?

A. Some people are surprised by the prices. Other people look at the prices and say, “Oh, is that it?”

It’s very much based on what they are used to spending. If you are used to going to Old Navy, then you are going to be shocked. But if you’re used to shopping mid-range, our prices don’t seem that unusual. The more people know about clothing and what it’s made with, the more reasonable our prices are to them.

Q. Do you think that Mad Men changed things for your customers at all?

A. It’s not something I ever thought about. The show has amazing fashion. I know Banana Republic did one or two Mad Men lines but they were kind of lackluster. They can’t afford to do the kind of production that it would cost to make those clothes.

Q. I was helping a friend go thrift shopping this weekend, and man, you and I came of age in the golden age of vintage. People were giving away really solid clothes. Now it’s all stretched out Forever 21 jeggings.

A. The stuff that fast-fashion companies make now — no one is going to want that. People don’t even want it now. There’s this idea that you give it to Goodwill and that it goes to poor people, but the reality is that those stores do not sell anywhere near the amount of donations they get. So people say, “Well, they send it to Africa.” Africa doesn’t want it either. Some of it gets put into mattresses and insulation. But a lot of it goes into landfill.

We don’t have the means to keep on making raw materials at the rate that we’re making them. Cotton is a thirsty crop. We should be using less of it, and allow the price of it to go up so that the people who grow it make a better living, and so that more of them can grow organic. To help people convert, we have to use less of it.

We are not paying the true price for the stuff that we buy. Look at the towns in India that make a lot of leather goods. The process uses a lot of chemicals, and those chemicals go straight into pits and wind up in the drinking water. If we had to go to those villages and buy leather goods from people and see that, we couldn’t do it anymore. We couldn’t face what we’re doing.

One of the magical things about the time we live in now is that anything goes. I think we’re in a post-trend era. The ’40s and the ’50s and the ’60s — those were defined by certain styles. Now, how do you define 2016? There are trends, but we’re all over the place. Find out what works for your body and your lifestyle. There’s no reason why we should be changing trends all the time. Figure out what works for you. Don’t worry about the trend.

Greening the clothing industry isn’t just about cotton and water. The message counts, too