Greening the clothing industry isn't just about cotton and water. The message counts, too 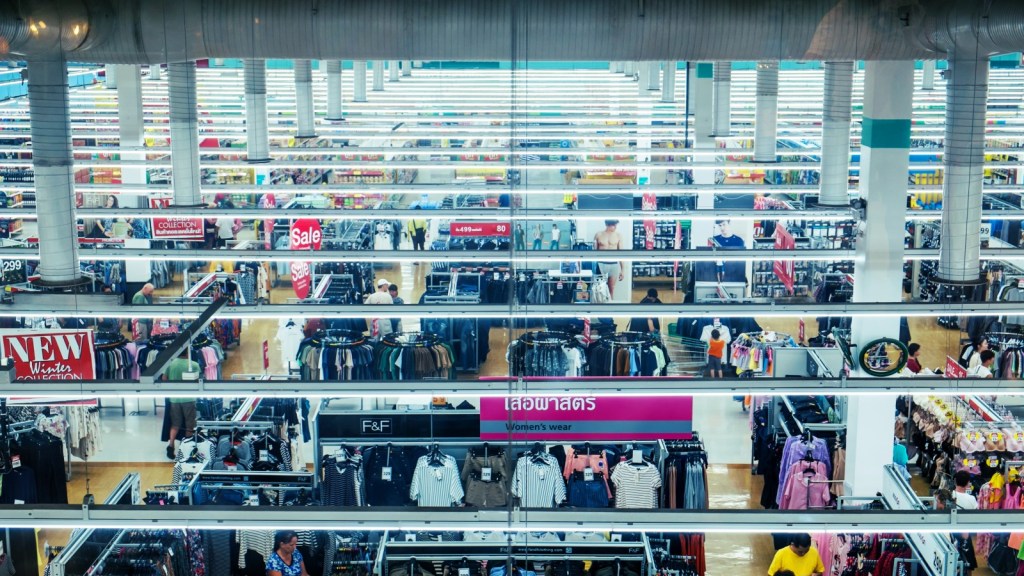 Greening the clothing industry isn’t just about cotton and water. The message counts, too

For a quick explainer on how to buy better, watch our video; and for a look into life as a “slow fashion” business owner, read our interview with Bree Hylkema, co-founder of Vermeulen & Co.

The fashion industry isn’t known for its climate sense. Depending on who you ask, textiles and apparel account for something on the order of 10 percent of global carbon emissions. Producing a single ton of fabric can require up to 200 tons of water — water that’s often contaminated with untreated dyes and pumped back into rivers. The first ingredient in polyester is petroleum. Any way you spin it, apparel’s impact on the planet is less than ideal.

Which makes sense. Just about everyone out there wears clothing. An industry whose consumers number in the billions is bound to have a significant environmental impact.

In the run-up to last December’s U.N. Climate Conference, seven top fashion brands released a joint statement detailing their concerns for a warming world. Not only was climate change grave news for the planet, it was potentially awful for the bottom line. (You can imagine how, say, an increased frequency of drought might affect cotton yields.) While not offering up any new pledges per se, the declaration did momentarily swivel a media eyeball in the direction of the industry’s previous commitments to — and awareness of — the problem at hand. Levi Strauss & Co., for example, a signatory to the declaration, reaffirmed its 2012 pledge to cut emissions by 25 percent by 2020. And the company is indeed on target to meet its goal.

But should we care? Should we be encouraged, or even satisfied, by a 25 percent emissions cut? Or is something like the reaffirmation of a pledge in the face of the Paris Climate Conference a case of greenwashing at its most transparent? Given the sheer scale of the apparel industry’s supply chains, the tensions among greenwashing, true climate action, and the “better-than-nothing” argument demand more than a thread’s width of attention.

Patagonia, the outdoor clothing brand long recognized as a leader of sustainability initiatives in the field, is a staunch proponent of private sector climate action. Sitting on a panel in Paris in December, Patagonia CEO Rose Marcario argued, “We’re moving faster than a lot of governments.”

Of course, the company still makes huge amounts of clothing — clothing that’s sold around the world — and is far from carbon neutral. The winking “Don’t Buy This Jacket” campaign predictably resulted in the purchase of more than a few jackets. And while the company is more or less openly anti-growth, “anti-consumerism is clearly helping to build the Patagonia brand,” wrote J. B. Mackinnon in The New Yorker last year. “Indeed, the company is seeing double-digit annual growth.” Under its “1 Percent For the Planet” initiative, the company donates 1 percent of net sales to non-profit environmental organizations each fiscal year. In 2013, it donated $5,602,433. Multiply that number by a hundred and you get a sense of Patagonia’s size.

Does the company necessarily counter itself? “In some ways, we’d do a lot more to help the environment if we just went away,” reads Patagonia’s website. But a passing glance up and down any given street in Seattle, for example, confirms that the brand’s not going anywhere.

When I sat down with Marcario after her panel discussion in Paris, she told me that one of the most promising recent developments in the apparel industry is that companies are now vilified if they don’t have a sustainability strategy. “If you don’t, you’re probably not going to be a brand of choice — or you’re going to be marginalized,” she said. “And I think that’s a good thing.”

Shaming, though, only goes so far. A company has to have a sustainability strategy that actually works.

You’d be hard-pressed indeed to argue that anything Patagonia is doing is worse than what, say, fast fashion brand Zara is doing. The question is whether or not there’s a way to truly produce clothing right. Maybe that means carbon neutrality, or perhaps the elimination of commodity-driven deforestation. Or maybe there’s just a central contradiction in trying to fix the problem of there being too much stuff by making more stuff. You can see how this quickly devolves into an argument for nudity.

Patagonia does think critically about the agricultural practices it supports and the production standards it employs. Several of Patagonia’s sustainability-minded trends — a plant-based (as opposed to petroleum-based) wetsuit, for example — have gone on to be adopted by bigger players in the industry. But what if Big Wetsuit simply offers another, premium (read: green) option for the sake of satisfying demand and then simply continues to pump out the synthetic suits at the same rate? We have more self-described green clothing than ever before in industrialized history, but the quantity of clothing we buy is still massive: Americans purchase around 20 billion new items of clothing a year. Try that number on for size.

Tom Cridland, founder of an eponymous fashion brand, told me that most of the solutions to the industry’s environmental problems boil down to longevity. The brand’s flagship product, the 30 Year Sweatshirt, is billed as, well, exactly what the name implies. “Wardrobe staples shouldn’t be made systematically to fall apart,” said Cridland. But is it too late for 30 Year Sweatshirts? If there’s anything that changes more slowly than the climate, it’s probably entrenched industrial practices.

Marcario is a case study in optimism: “If you’re not out there raising the bar, everyone accepts the entrenched status quo.”

Of course, there are some fairly obvious things you can do as a maker of apparel to improve the environmental impact of your supply chains, and several of them encompass more than the concept of longevity. You can recognize that the supply chain extends further back than the factory. You can opt for non-petroleum based, organic fibers, such that soil can sequester carbon. If you’re going to use pesticides, use the right ones. Reward countries with strong forestry policies. Be conscious of the energy mix of the country in which your mills and factories are based, and power your factories with renewable energy wherever you can. Partner with shipping companies that use eco-friendly fuels. Avoid air transport. Become a Benefit Corporation. Reuse your cooling water, recover heat from your hot water, and improve the boiler efficiency of your mills. Build your clothing to last.

And companies like Patagonia are doing many of these things. But Marcario’s sentiment — the one that hints at the importance of platform over product — might be the actual answer to the question of whether or not the company should just go away. Don’t leave, the logic goes. If we’re not here, who else will lead the charge?

It’s a sentiment echoed by another recent entrant to the sustainable fashion space. Zady, an online fashion brand dedicated to greening its supply chains, argues for the same existential justification. “If we were just an advocacy group, we might just be speaking to the same people,” said Zady CEO Maxine Bédat — the same people, as in environmentalists who already care about making green choices. Bédat argues that the fashion angle allows the message to reach consumers that might not already be thinking about these issues.

And often they’re not. Fashion, especially trend-centric fashion, has been relatively slow to embrace real sustainability initiatives. As Bédat explained to me: “The reason that it has taken a long time for the apparel industry to understand the connection between itself and climate change — and other issues related to the Sustainable Development Goals more generally — is that it’s complicated. It’s not as simple as how much fuel you’re using in your cars or airplanes.” As a consequence, consumers simply haven’t been exposed to the same simple messaging as, say, that which comes with remembering to turn off the lights when you leave a room.

For Bédat, the most relevant metric in the space is cost-per-wear. “Especially in an industry in which the consumer has been led to believe that clothing is disposable, that’s the first umbrella,” she said. According to Zady’s The New Standard, a set of guidelines for a more sustainable garment industry, 150 billion new pieces of clothing are produced every year.

“That is a replaceable wardrobe, every year, for every single man, woman, and child on the planet,” said Bédat. Shifting the narrative from one of disposability to one of durability shifts the question away from the price tag, she says. Tom Cridland, too, argues for a cost-per-wear understanding of fashion.

The product of this framework is, however, a relatively niche market. There are relatively few, globally speaking, who can afford an article of clothing that’s produced by a company that supports sustainable agriculture and pays fair wages. Referring to upstarts like Zady and Tom Cridland, Marcario said, “The capital markets aren’t really set up to reward those guys.” The primary concern, then, isn’t so much one of greening supply chains as it is creating a growing set of consumers who expect these kinds of supply chains. Increased competition in the space should foster affordable clothing that’s still sustainable.

For these companies, that transition starts with simply informing consumers that there are better options out there. Of course, it doesn’t hurt if they’re the ones selling those options.

“When I look to the Benefit Corporation movement, that, to me, is the grassroots saying, ‘We want businesses to mean more than profit, and as consumers, we want to vote with our dollars for those companies,'” said Marcario.

“I’m not that arrogant to imagine that I’m going to be playing a major part,” said Cridland. But that’s not the point, he argued. Shifting the tides of fashion will take time and major buy-in — and he is, in some capacity, helping to nudge consumers toward more sustainable fashion choices.

Will it work? Cridland, ever on-message, responded: “We’ll have to see 30 years down the line.”