Here, in brief, is a big chunk of what we talk about here at Grist: The climate is heating up, and lots and lots and lots of living things aren’t actually going to be living much longer. So how do you get humans — those responsible for climate change and, as such, the only ones with the power to put the brakes on it — to actually care about the fact that such a vast number of species are disappearing? Is it possible, for example, to get the average person to relate to an oyster?

Louie Psihoyos, executive director of the Oceanic Preservation Society and director of the Academy Award-winning documentary The Cove, tries to answer this question with his latest film, Racing Extinction, which premiered at the Sundance Film Festival last month. Just this week, the film got a major distribution deal with The Discovery Channel, and will be broadcast to 220 markets all over the world in addition to a theatrical release. Watch the trailer:

I talked to Psihoyos about everything from whales to plankton, and how our tech-obsessed world might have the power to save those species even as it’s killing them.

The interview below has been edited and condensed.

Q. You’ve built a reputation making these very beautiful documentations of nature, but you’ve also explored the world of tech and tech billionaires. What kinds of connections do you see between those subjects?

A. Yeah, I guess I never thought about that but it’s really true [that there are parallels.] I did four stories about the Age of Extinction for National Geographic, [and then] I also did a story on the Information Revolution.

I do love technology. Both films — The Cove and Racing Extinction — are kind of the result of watching both too many Jacques Cousteau specials and James Bond movies as a kid. I loved the excitement of doing interesting things with technology, and I think [my movies] reflect that. And that’s not to say that we can basically think our way out of any situation, like James Bond, but we can certainly do a lot.

I think it’s true that, as a culture, we’re removed from nature as much as ever before, but we’re also connected more than ever before, which may be more important. Information is traveling at the speed of light, and the new “viral” now is not [reaching an audience of] a million, it’s 100 million, and you have that kind of potential if you have a powerful message. 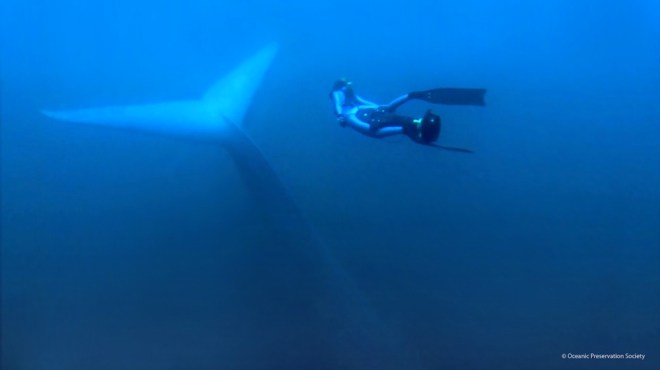 A lot of what we’re doing right now with tech is what got us into these problems. It’s what we think of as cheap energy — burning coal and the fossil fuels have made things cheap, but at a big cost. And it’s now dawning on us that we’re acidifying the oceans with that same technology. The fact that we’re changing the fossil record of the future so that we could be destroying half the species on the planet by the end of the century should give us pause.

Q. How do you get people to care about the extinction of animals from which they’re very removed, and which they might never see?

A.The way we do it with Racing Extinction is really with that first scene, where you have — I don’t want to have to do a spoiler alert — but when you hear that the last male of species is singing for a mate that will never come. [There’s this] science fiction nightmare of being the last person on Earth — look at a film like Gravity or Interstellar. It’s all about: Imagine what it would be like to be the last people on Earth. Imagine what it would be like to be alone in the vacuum of space.

And now, that’s going on possibly 30,000 times a year — we’re creating this same science fiction nightmare for all these animals. And we don’t even know how many species are left on the planet by an order of magnitude, but we do know now that we’re losing them faster than our ability to record that they’re even here on the planet with us.

I think that when you start to understand that these animals — in fact, every animal on the planet, from an insect to a blue whale, has a song, and almost without a fault, they all have the ability to communicate.

Q. Even if we never sense it?

A.Yeah, that’s what we try to do in the film is get people to [realize that.] You might never see a blue whale in your life, you might never hear one, but it should create a sense of awe in you that this animal has a song that is so loud, it can be heard across oceans, even if you can’t hear it with your own ears. I hope after people see Racing Extinction they’re left with respect for the things that they can’t comprehend, they can’t see, or they can’t hear. I think our bodies are a very blunt instrument to comprehend all that there is in the world.

One of the biggest revelations [of the film], I think, is the game-changing technology was the emissions camera [that we use] — because people couldn’t visualize greenhouse gases. You can’t imagine how fumes are affecting nature when you can’t see it. But we developed this technique of cutting between what your eye sees and this hidden world of greenhouse gases, which is revealed by the infrared camera. It should be pretty powerful — a lot of people say it’s the most powerful part of the film.

Q. In The Cove, you were able to build audience empathy for dolphins, which are these very intelligent animals with perceptible personalities. How do you get audiences to care about plankton, oysters, etc. — organisms that are harder for us to empathize with?

A. It’s probably a revelation to most people that cell plankton and cyto-plankton are even out there, and they’re so vital to our existence. We have that line [in the film] that says that it was only until plankton could generate enough oxygen in the atmosphere that land animals could even exist. So when we’re talking about cutting down plankton production by, some say, 1 percent a year, or even a fraction of that, it should give everybody pause — if you like to breathe air.

I hope people do go out of the film and feel more connected to the planet, that they realize that what we’re doing could be affecting plankton — which you can’t see, but is responsible for at least half of the air that you breathe. I mean, that’s an intellectual exercise, but once you’ve seen the film, you should be emotionally beaten back enough so that you’re able to hear the information.