Can we cope with climate change by genetically engineering ... people? 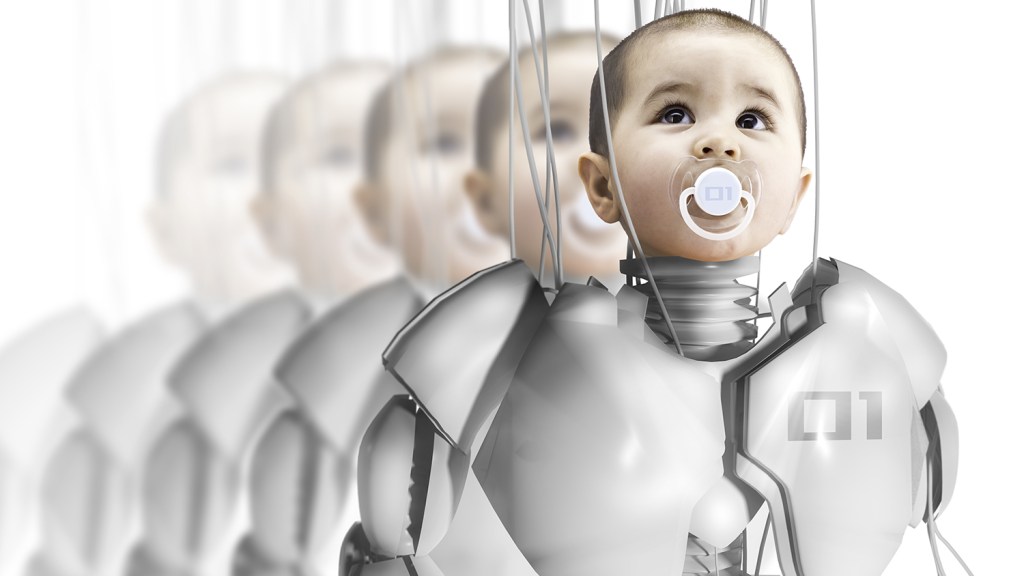 Can we cope with climate change by genetically engineering … people?

The year is 2060. The United States Senate is sponsored by ExxonMobilShellCorp and the executive throne is still occupied by CEO Trump, our 114-year-old dictator with the youthful vigor of a lion cub thanks to a full head transplant and GMO anti-aging serums. Times are dark in these United States circa 2060: Despite decades of warning, humanity has completely failed to curb carbon emissions, the White House is now ocean-front, and MTV still doesn’t play music videos. In a last-ditch effort to save the world from ourselves, we’ve resorted to something that was previously both illegal and impossible: human engineering.

At least, this is the world as imagined by S. Matthew Liao, a bioethicist who in 2012 published a paper on a “new kind of solution to climate change, what we call human engineering, which involves biomedical modifications of humans so that they can mitigate and/or adapt to climate change,” according to the abstract. In other words, he’s talking about fucking with our bodies so we stop fucking with the planet.

At the time of publication, Liao’s paper received a fair amount of attention. Bill McKibben tweeted that it was one of the worst climate solutions of all time. The Guardian called it “unsettling.” Mark Lynas thought it was an early April Fool’s joke.

“[M]any people wish to give up meat for ecological reasons, but lack the willpower to do so on their own,” wrote Ross Andersen in an article on Liao’s ideas in The Atlantic. “The paper suggests that such individuals could take a pill that would trigger mild nausea upon the ingestion of meat, which would then lead to a lasting aversion to meat-eating. Other techniques are bound to be more controversial. For instance, the paper suggests that parents could make use of genetic engineering or hormone therapy in order to birth smaller, less resource-intensive children.”

You may have noticed that in the three years since the paper’s publication, we have yet to start genetically engineering humans to fit better in airplane seats, much less take up fewer resources. But Gizmodo recently rebirthed this idea in its podcast “Meanwhile in the Future.” Host Rose Eveleth looked at some of Liao’s suggestions, and how feasible — and ethical — they really are.

First, Eleveth takes on night vision. Liao proposed that if humans have more rods in our eyes, we could see at night and wouldn’t need to turn on those pesky lamps when the sun goes down. Eveleth writes:

The problem here is that there are only so many spots for rods and cones in our eyeballs, and our particular balance of the two is a tradeoff. Humans are day creatures, so they have more cone cells. Animals like cats are night creatures, so they have more rods. So during the day, humans can actually see motion about 10 to 12 times better than a cat. And many experts think that cats don’t see the same number of colors we do, although they’re divided over whether cats see in mostly blues and grays, or whether they see more like dogs where everything is less saturated. So if we want night vision, we might have to compromise some of our day vision to get it.

Honestly, my day vision is so bad I doubt I’d be able to tell the difference. Plus, who wouldn’t want to be more like a fuzzy wuzzy li’l kitty cat? They have claws! And land on their feet! I’ll take a tail while we’re at it, please.

Eveleth also looks at the possibility of engineering meat allergies:

According to the Food and Agriculture Organization of the United States 14.5% of all greenhouse gas pollution comes from livestock. So the idea here is to make people allergic to eating meat. The problem is that there’s no real way to control the severity of the allergy, and the two proteins that Liao talks about targeting (BSA and alpha-gal) are both found in all kinds of places like milk, eggs, dogs, cats and pork. People allergic to alpha-gal seem to be able to eat poultry and fish, but if they were to eat pork or lamb or beef the allergic reaction includes everything from hives to gastrointestinal upset, to anaphylactic shock. Not something most people would want to sign up for.

Now, this one is interesting because while it seems totally ludicrous and far-fetched that you could one day become allergic the hamburgers you’ve been eating since toddlerhood, it’s actually happening in real life — and it’s got nothing to do with genetic engineering. In recent years, people from Texas to the Maine have developed life-threatening allergies after being bitten by the Lone Star tick — which, researchers think, makes human immune systems develop an allergic response to a sugar found in red meat. So even if we humans are unable — or willing — to give up our appetite for cheeseburgers and bacon fries, nature might take care of that for us. Thanks, Gaia!

Okaaaaay. Smarter people have fewer children? While this may be true, the idea should make anyone familiar with eugenics awfully uncomfortable, as should the theory that ADHD drugs make you more intelligent instead of just more awake. Here’s an alternate suggestion: Instead of force-feeding humans pharmaceuticals and lining the pockets of Novartis, let’s just sterilize all males on their 10th birthdays and be done with humanity in a few generations, shall we? Nope? Fine. Force-feeding Ritalin it is. Well, that or providing universal birth control — and in the United States these days, free access to birth control seems as unlikely as GMO people.

Regardless of how bizarre Liao’s suggestions seem now, they might not seem so ludicrous when the Atlantic laps at Minneapolis and thirsty Californians have resorted to drinking pee. Let’s hope we solve this climate thing before genetically engineering ourselves is the only option we have left.