As the battle over reproductive rights plods along, with all the grace of a wounded dog that refuses to just buy the goddamn farm, I have to wonder: What are the men who insist that women don’t deserve access to full reproductive healthcare thinking? Because that’s what this whole charade is really about — that if a woman seeks out contraception or, in the less desirable scenario, an abortion, she must have had sex without wanting to have a baby.

But what these gentlemen perhaps fail to realize is that if they, too, want to occasionally get their rocks off without producing an infant and they enjoy having sex with women — it’s really in their best interest for women to have a resource like Planned Parenthood. And if they have sex with men — guess what! — Planned Parenthood offers all kinds of handy services like STD testing.

So, if you’re a human who enjoys having sex with other humans and doesn’t want to create another pain-in-the-ass human life (ha! JK) every single time, Planned Parenthood is a great thing for you. I promise. I don’t understand why this isn’t more explicitly stated.

In honor of recreational sex, our chasers for the week are going to be as unreasonably caliente as we can muster. Let’s do it.

Curious why we’re writing about access to reproductive healthcare? Watch this video.

Shot: On Tuesday, Planned Parenthood President Cecile Richards testified in front of the House Committee on Oversight and Government Reform to respond to the intentionally misleading and heavily edited videos released by the Center for Medical Progress. The hearing is like nothing so much as the Salem witch trials, and listening to its highlights is genuinely upsetting. But there are a couple of bright moments — like Rep. Brenda Lawrence’s (D-Mich.) speech.

Chaser: America may be run by a rabid pack of misogynists, but we still produced Beyoncé, so we’re not totally hopeless.

Shot: Late Wednesday night, an arsonist set fire to a Planned Parenthood facility in Thousand Oaks, Calif. Fortunately, no one was injured or killed — but this was the second attack on Planned Parenthood centers in September, which is terrifying.

Chaser: May I suggest channeling your rage into a million crunches, or whatever Ciara does to get abs like that?

Shot: On Thursday, the Obama administration announced that it will leave the question of government-covered contraception up to the Supreme Court — because some religiously affiliated employers still believe that their employees receiving any subsidized contraception is “immoral.”

Chaser: Love it or hate it, Taylor’s latest is so wildly over-the-top that it’s bound to provide some kind of catharsis.

And one extra chaser, because it’s been that kind of week: The New York City Health Department has put together a pretty cute ad campaign to promote IUDs. You don’t have to sell me on the joys of highly effective, low-maintenance birth control, but this is certainly a convincing argument: 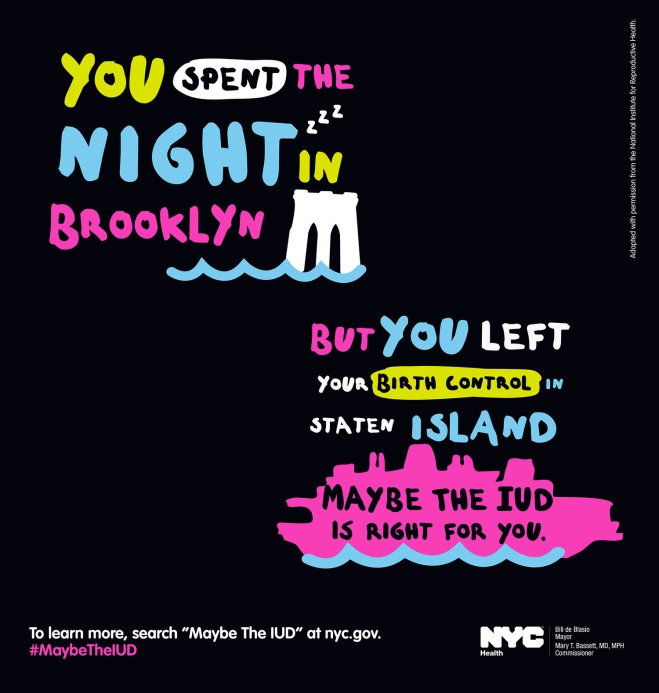 What do John Boehner, the pope, and the state of Texas have to say about women this week?