How to be a science girl in a Barbie world 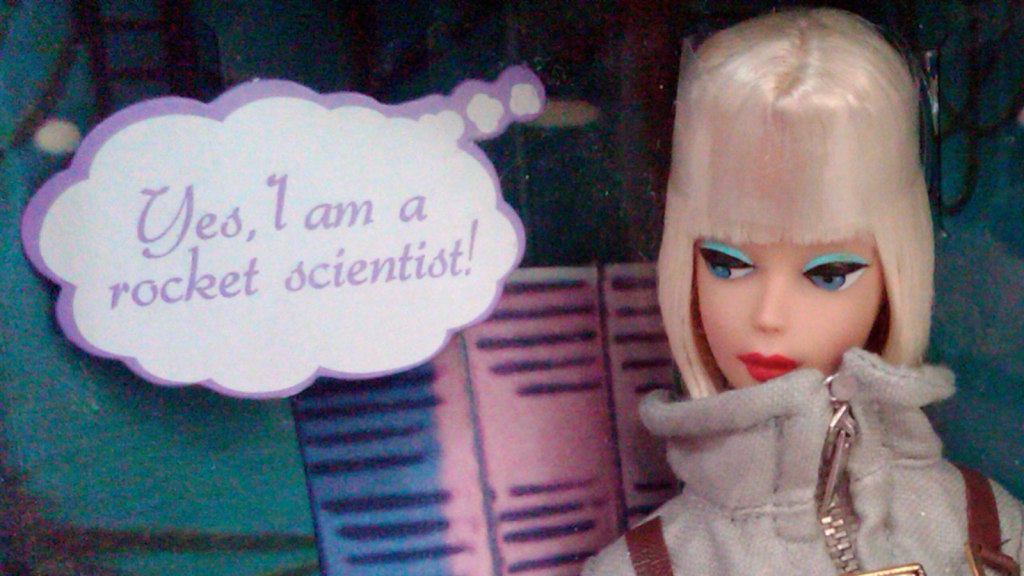 How to be a science girl in a Barbie world

I have been thinking a lot about women and science — specifically, why more of the former aren’t working in the latter, and what can be done to change that.

Why does this matter? In short, diversity in science is a very good thing. In 2004, economist Scott Page co-authored a case study in the Proceedings of National Academy of Sciences, which showed that diversity outweighed ability as a contributing factor to effective group problem-solving. In a 2008 interview with The New York Times given around the release of his book — which further presented the case for diversity in science — Page makes the case for needing a variety of backgrounds in labs, classrooms, and boardrooms alike in a very succinct little nut:

The problems we face in the world are very complicated. Any one of us can get stuck. If we’re in an organization where everyone thinks in the same way, everyone will get stuck in the same place.

There is arguably no more complicated or far-reaching problem in the world today than the issue of climate change — in terms of both the scope of solutions and spectrum of people, places, and things affected (it doesn’t get much more varied than “everyone and everything in the world”). And because climate change and its solutions ought to be studied and addressed by scientists, the fact that women are quite underrepresented in science — to the tune of one woman for every three men in STEM fields in general, and a significantly lower ratio in fields like engineering and physics — is a problem. The urgency for women’s involvement in science is further compounded by the fact that women — in indigenous communities and developing countries in particular — are disproportionately affected by climate change, as I wrote about this summer.

“But it’s the 21st century!” you say. “We have Title IX! Women have outpaced men in college enrollment! Why are we still talking about gender equality in the sciences?” Let me refer you back to that 1 to 3 ratio. So the real question is: Why? In the age of affirmative action and more and more women in higher education, why are women going so underrepresented in scientific fields?

In the midst of researching this series, I was struck by an article in The Atlantic about gendered toys — bear with me. Elizabeth Sweet, the author, points out that today, toys are reinforcing gender stereotyped roles more so than they were 50 years ago:

[L]ate-century marketing relied less on explicit sexism and more on implicit gender cues, such as color, and new fantasy-based gender roles like the beautiful princess or the muscle-bound action hero. These roles were still built upon regressive gender stereotypes — they portrayed a powerful, skill-oriented masculinity and a passive, relational femininity — that were obscured with bright new packaging. In essence, the “little homemaker” of the 1950s had become the “little princess” we see today.

This is not to say, necessarily, that sexism is more prominent in our culture today than it was in the Mad Men-era. But it is alarming because it implies that the same expectations that have oppressed women for millennia — Be passive! Be pretty! And never be pushy! — are still very much in play where they’re most harmful: In the sphere of small children.

And over the course of talking to different women about their experiences as scientists, I’ve found an interesting repeated theme in our conversations: Discussing the types of toys and books that are/were available to their very young daughters.

“I think — and I will say this as the parent of a daughter — that [sexist attitudes] start almost instantly,” says Anne Jefferson, a geologist at Kent State University. “It’s awful, but that sort of messaging starts immediately: ‘Don’t play with dinosaurs, play with princesses.’”

Jefferson told me how her daughter had brought home the much-ridiculed book Barbie: I Can Be A Computer Engineer from her preschool. (Primary reason for said ridicule: Barbie, aspiring “computer engineer,” can’t actually make a game without the programming expertise of her helpful dude pals, Brian and Steven.)

“I [try to] fight back against those things when I see them — both directly and by discussing them with my child,” says Jefferson. “Like: ‘Rather than Barbie asking the boys for help with her program, what could she have done? What could she have tried to do, could she have tried to figure it out on her own?’ These [messages] can be unintentional, but they can still be incredibly discouraging and harmful if the kids keep getting them over and over again — which they do.”

A 2005 study by Judith Blakemore and Renee Centers asked undergraduate students to classify toys along a spectrum from stereotypically feminine to stereotypically masculine. After placing those toys into groups according to that classification, the study’s authors then had a second, distinct set of students assign characteristics to each group. The results will likely not surprise you: The “strongly feminine” group of toys were most associated with appearance and attractiveness, and the “strongly masculine” group with violence and aggression. However:

It’s important to recognize, however, that an interest in playing with stereotypically “girly” things doesn’t have to be detrimental to a girl’s development. In a conversation I had with Alice Pawley, an associate professor of engineering education at Purdue, I found that one reason for the underrepresentation of women in science might have to do with how we are taught to understand science in the first place. Pawley shared her experience of learning Harvard biologist Ruth Hubbard’s “feminist critique of science”

The idea was that there are certain ways that we come to know something — and the ways in which women come to know things don’t count as science. And I’d never thought about the mathematics that are involved in quilting, or all of the systems problems involved in managing a family. All of the food that you have to buy and prepare, and getting everybody fed and clothed and out the door on time — you can think of that as an engineering problem, but we don’t. And it’s not also the subject of engineering work, because it doesn’t constitute paid work.

The takeaway? We don’t necessarily have to teach girls to hate the Easy-Bake oven. The focus, instead, could maybe helping them to recognize the types of thinking and problem-solving that go into cooking as scientific reasoning. Indeed, most of my own early kitchen ventures could be absolutely described as “experimental” — especially the one that resulted in flames exploding out of the toaster oven! (Sorry, mom.)

The real danger might lie, instead, in the continued emphasis on passivity and attractiveness as important values for girls to have. In her Atlantic article, Sweet notes that the current toy marketing tends to masquerade as advocating for girls to pursue any number of ambitions (think of computer engineer Barbie):

The reformulated story does not fundamentally challenge gender stereotypes; it merely repackages them to make them more palatable in a “post-feminist” era. Girls can be anything — as long as it’s passive and beauty-focused.

It would be unproductive — and also just wrong — to say that Bratz dolls are the primary culprit for the gender imbalance in science today, but I do think that the way we teach children how to play is an interesting jumping off point for looking at the many, many ways in which the kinds of attitudes that create that gender imbalance can begin. Which, conveniently enough, is exactly what I’m attempting to do with this series — so check back as I explore how we can make science (and the world!) more gender-equitable.