How to get shit done like a good activist 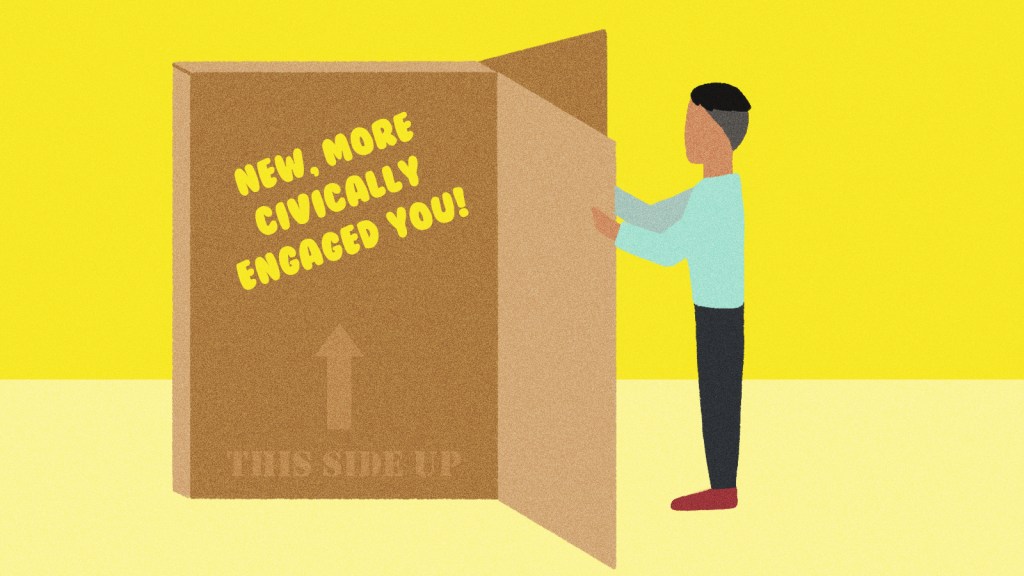 How to get shit done like a good activist

“Activism” can be a uniquely repellant word — first of all, it requires that you be active, which feels like a lot to ask when your bed is so much more appealing than the real world. It brings to mind a person brandishing an extremely earnest sign, yelling about compostable straws, and then Instagramming the whole charade. No one wants to spend time with that person.

That’s because those are all examples of bad activism. (Sorry.) Good activism — the kind that brings about real, effective change — is based on being a confident, receptive, and reliable person. The kind of person who you’d actually enjoy spending time with. Because that’s the key: The best way to get others to sign on with your cause is to be a person worth their time.

(And once you’ve built the foundation for being an engaged citizen, we laid out some actions you can take to do things like fight fossil fuel infrastructure and build healthier food systems.)

Here are some of the best tips, straight from the activists:

Seems straightforward! But it wouldn’t be on the list if it were a foregone conclusion.

“If you want to go into a community that you’re not historically from, you have to be willing to listen — you can’t just ride in on your horse and say, ‘Alright, I have a plan, here’s what we’re gonna do,’” says Tamika Butler, executive director of the Los Angeles County Bike Coalition.

“If we’re spurred to help communities that have been historically ignored and neglected, that’s amazing,” Butler says. “But when we go into those communities, we have to realize that they’re full and rich with resources and people and organizations who have been doing the work. They may have been ignored, you may not have known about them, but that doesn’t mean that they don’t exist.”

Get off the internet

(Well, when you’re done reading this.) Civic engagement means engaging with people, which doesn’t happen from a screen. “Your bread and butter,” explains Sonja Trauss, founder of the SF Bay Area Renters’ Federation, “is going to be sort of cold calling either city employees or people who seem really active, people who list themselves as the organizer of XYZ neighborhood group or advocacy group or whatever. And then millions of coffee dates and informational interviews.”

Speak up at local meetings

Trauss adds that she was once super shy about attending city meetings. Overcoming that, she explains, starts with observing how city officials interact with each other and with the audience. Pay attention to the regulars. Read the meeting agendas. Familiarize yourself with the procedures, and they won’t seem as scary.

Most people won’t really give a shit about pedestrian safety or housing levies until they understand how it relates back to them or to their loved ones. Kelley Robinson, deputy national organizing director for Planned Parenthood, emphasizes that when she broaches the subject of reproductive rights, she doesn’t talk about anti-choice GOPers or proposed pieces of legislation. She describes how her life, and the lives of her friends and family, have been impacted by Planned Parenthood. That’s how people start to get it.

Put events on your calendar. Commit to things, and then follow through on them. Even if it’s bringing a pie to a potluck that’s being held to spread awareness of a new transit initiative — just do it. Make the pie. Showing up is more than half the battle. According to Trauss: “All local political scenes are dying for competent participants.”

Pick up the phone — and make the meeting

It’s been said 100 times, but the relatively simple act of calling and/or meeting with your elected official gets a lot of mileage. Joanne Carney of the American Association for the Advancement of Science offers this reminder: “Members of Congress do spend time back in their districts, and they have district offices — and sometimes they’re a little bit more relaxed. So requesting opportunities to meet with [them] when they’re in the district sometimes can be very fruitful.”

If you’re riled up about something — and there will be plenty to be riled about in the next four years — consider this before sharing it on social media: If a post is worth reading, it will be credible, valuable, and thoughtful. If a piece of writing doesn’t clear that (honestly, low) bar, put the link away and never speak of it again. Several activists pointed out the power and pitfalls of social media when it comes to promoting causes.

If you don’t make political action enjoyable for yourself, you just won’t do it — and certainly no one else will. It’s that simple.