As winter settles heavily upon both your street and serotonin levels, you may find yourself possessed by a single, unshakable thought: “I must leave this place. I must move, immediately.” Often, when I find myself in such a mental state, I turn to my dad for advice:

Dad, I think I have to move. Everything is wet, all the time, my room is so cold, I don’t know why, there are four hours of daylight, like, max —

Now, just calm down. Winter is indeed the cruelest month — but because you’re forced to come face to face with … the heating bill.

I raised you in a home that was conservative in its furnace usage. Why? It costs two arms and two legs to heat this house. Maintaining this porous beast at a toasty 70 degrees will leave you limbless, financially speaking, and that’s why we keep heavy blankets in every ro —

OK, but what does that have to —

Listen to me. When you think about where you’d like to make a home, it’s important to think about … home energy usage. The heating bill will consume every last penny in your pitiful checking account. This is a truth of life you must accept.

But I’m going to share with you the takeaways from our conversation, because it turns out my dad knows a lot about regional heating trends and why they matter from both an environmental — and financial — perspective. Also, he dispensed some invaluable sartorial advice.

This winter, heating costs are actually down due to the happy coincidence of lower fuel prices and overall higher temperatures. (To clarify: Happy for aforementioned pitiful checking account, not the planet.) Natural gas is the most popular source of heat in this country, accounting for nearly half of all fuel consumed to keep us toasty. But like a fondness for kielbasa over bratwurst or Coke over Sprite, each region has its oddities. 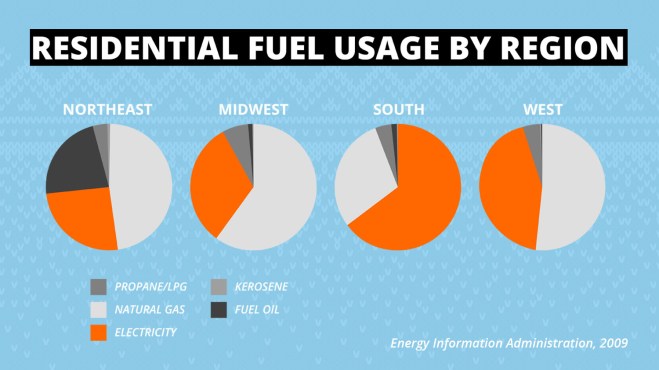 Northeastern states use far and away more fuel oil to heat homes than the rest of the country — 86 percent of all oil used to heat homes gets burned up in this chilly corner. While natural gas is no picnic — producing an all-time high of 1.4 million metric tons of CO2 in 2014 — burning oil emits much more CO2 and 130 times as much particulate matter, and it’s almost three times as expensive as natural gas. Additionally, this is also the only region of the country to see an increase in natural gas usage in 2013 in terms of percentage of homes that use natural gas.

But here’s a way to get around all of that:

Say you move somewhere not as cold. The South is the only region of the country that relies primarily on electricity to heat its homes — which makes sense, because it’s a warmer region and a little can go a long way. But the region also uses more fuel overall than any other part of the country, and is home to the majority of the country’s coal-powered electricity. According to EPA, burning coal produces more carbon emissions than oil or natural gas. 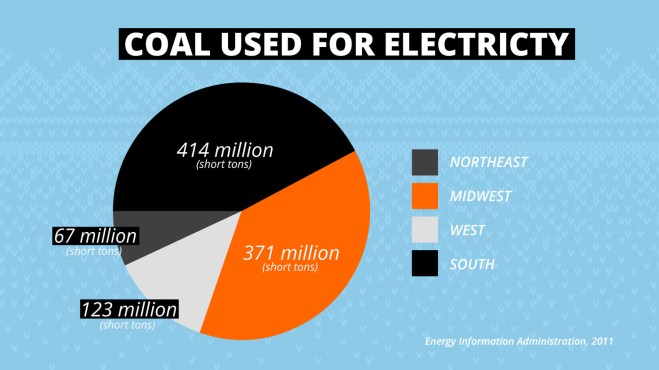 So what we’re starting to figure out is that heating a home uses a lot of resources that aren’t so great for the climate, even in a relatively warm segment of the nation. A handy tip to deal with that:

OK! Maybe, for some reason, you’d like to go to the freezing tundra of the Midwest. This clump of bone-chilled states gets a greater share of its fuel from our old friend natural gas as well as propane than any other region.

To avoid certain death in Des Moines, you’re going to need to heat your house. But if you just twiddle the thermostat as much as is absolutely necessary — maybe, just maybe, you could get by if you …

And now, we come to the West, that land of legal marijuana and the wimpiest of winters — on the coast, at least. But this year, temperatures are predicted to be 12 percent colder than last year — unlike the rest of the country, which will experience winters that are 8-13 percent warmer.

However, the U.S. Energy Information Administration attributes the nation’s lessened dependence on natural gas to the fact that more and more people are moving west and south, where heavy heating isn’t as much of a necessity. In fact, in the West Coast states, residents are more likely than those in any other region to use nothing at all to heat their homes!

To sum up: Heat is necessary in every part of the country, and the resources that provide that heat vary from region to region — but all of them carry their own set of problems and emissions. Allow us to reiterate the holiest Dad-ism of all time: Before you give up on wherever it is you currently call home — or push up that extra notch on the thermostat — put on a nice, snuggly sweater. And now, we can talk about health insurance!