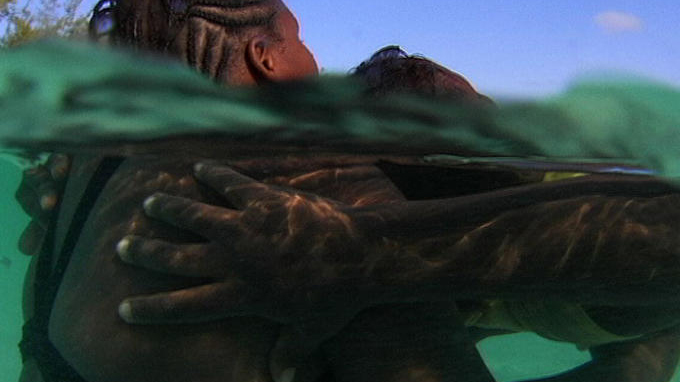 If you haven’t caught the documentary Free Swim, about the paradox of an island in the Bahamas where the natives don’t know how to swim (you can catch it free on online), it’s worth a look — especially if you’ve followed our own Grist-ian summer coverage of the often painful stories behind American swimming and beaches (found here, here, here, aaand here). That pain comes, in part, from a history of racism that has excluded black people from public swimming areas and taken their land to build beach resorts.

The film focuses on the Deep Creek village on the southern end of Eleuthera, a thin sliver of an island in the Bahamas — 110 miles long, but only about a mile wide. We know poverty besets the region because of the shanty shelters, abandoned farms, and the rusts and ghosts of industrial buildings throughout the landscape.

The children don’t seem “poor” — they dance in the streets, twist braids on the porch, and make music from discarded empty bottles — but they dream of going to big cities like New York and Los Angeles. They think they won’t make it because they are scared of the water they’d need to cross to get there.

One villager estimates that about half of the people on the island can’t swim, though a survey taken years before the film figures more like 90 percent.

The filmmaker, Jennifer Galvin, came to the Bahamas straight from the university to explore the relationship between water and public health in the Caribbean. She holds a doctorate and master’s degree in public health from Harvard and Yale respectively, and did her undergraduate work in the field at Brown. She came to this part of the Bahamas when she heard there were two American teens providing swimming lessons to the village children. Part of what kept her there, from 2006 to 2008, was the relationships she built with the islanders, and also her curiosity about how people who live so close to water became afraid of it.

Much of Free Swim involves the villagers explaining why they can’t or don’t swim, and where they believe their aquaphobias emanate from. Myth and fantasy drench these explanations. Kids are frightened by lore of a big octopus they heard eats people, along with deadly sharks. Another urban legend tells of a “boiling hole” that will cook you to death if you’re caught in it.

The subplot shows how the two American girls gradually coax the children, and even some of their parents, out of these fears, teaching a bunch of them how to float and swim in the process. The movie is keen to capture the gleeful moments of kids splashing about, invigorated by their new aquatic skills. Their fresh, glistening disposition on water leads to other rewarding moments, like excelling in school, the cinematic tale suggests. That narrative and the doc’s title leads us to believe that the moral here is that swimming helps free the villagers from the oppression of poverty.

But as the question sampled by Wu-Tang Clan from Gladys Knight goes: Can it be that it was all so simple then?

There are other issues at play here in Eleuthera  — Greek for “freedom,” which partially inspired the title. Given that these islands were some of the original posts of the Atlantic slave trade, racism and economic exploitation have held black Bahamians back, and not just from ocean-dipping. Viewers are treated to some of that story, though there’s not much room for it in the 50-minute film.

Eleuthera once had a booming hotel resort market in the 1970s, which was the primary employer of the indigenous population. Part of why many on the island can’t swim is because there was no time to learn. After school, kids didn’t go to the beach or a YMCA for swimming lessons. They went to where their parents were: in the hotels working. This is where kids “learned to be a busboy to start off with,” explains a villager.

But that tourism economy shifted to Nassau, on another island in the Bahamas, taking the jobs with it. Eleuthera was once populated with farms for dairy and poultry, but they’re mostly closed now courtesy of U.S. imports of those goods. Then there’s that pesky beach privatization problem, which has crept into Eleuthera, creating even more distance between the indigenous folk and their surrounding environment.

Learning all of that, you get the sense that It’s going to take more than just swimming skills to defeat these socioeconomic leviathans.

“A white person in a post-colonial society enjoys certain advantages and access,” says Patricia Glinton-Meicholas, a Bahamian historian in the film. “Even though we’ve had majority rule for the past 35 years, there’s a lot of catching up to do when you’ve had a slave past.”

Glinton-Meicholas says the black islanders suffer from a “psychology of scarcity,” the result of when white people take control of the economy and natural resources of the natives, which is what happened throughout the Caribbean.

The American teens, Brenda and Sally, come to Eleuthera not to further exploit them. Teaching the island kids how to swim is their way of hopefully undoing some of the oppression. They form the nonprofit Swim to Empower based off of this. But the film doesn’t admit that such swimming empowerment might only be the latest conceit for black freedom.

You can’t avoid that the teens are white amidst a sea of black villagers. The tone at times feels unflatteringly like a Teach for America project, where people parachute in from worlds of white privilege to teach black youth skills to be more functional in the global market. You can’t help but feel traces of Waiting for Superman, the documentary critics have labeled a propaganda piece for the education reform movement. Is this Waiting for Aquaman?

Galvin is aware of the perceptions. She told me her intention was not to shoot a PR vehicle for Swim to Empower. And she gets that the racial dimensions of the instructors and students might not be the best contrast.

“This film was not meant to be a ‘white girl saves the world’ film,” Galvin told me. “I see this [messiah complex] all the time, especially in the Caribbean, especially in Haiti, where people perpetuate this benevolent oppressor action — thinking they are doing good when they are still kinda engaging oppression.”

The Swim to Empower organization was handed over to Bahamians to run, which is what it was created to do, she tells me. She also discovered in her research that Bahamian laws actually mandate “swimming literacy” as part of its national curriculum. It was just never enforced. She hopes to create a “Free Swim” sequel, or perhaps a mini-series, where she can devote more time to unpacking the issues around race and class.

“I didn’t want to come at it as an academic film, or just a historical perspective on swimming and race,” said Galvin. “I wanted to make something more poetic and emotional, a launching pad for more conversations”

There is no narrator in Free Swim. It consists purely of the villagers and their voices, which is the best way to start the conversation.