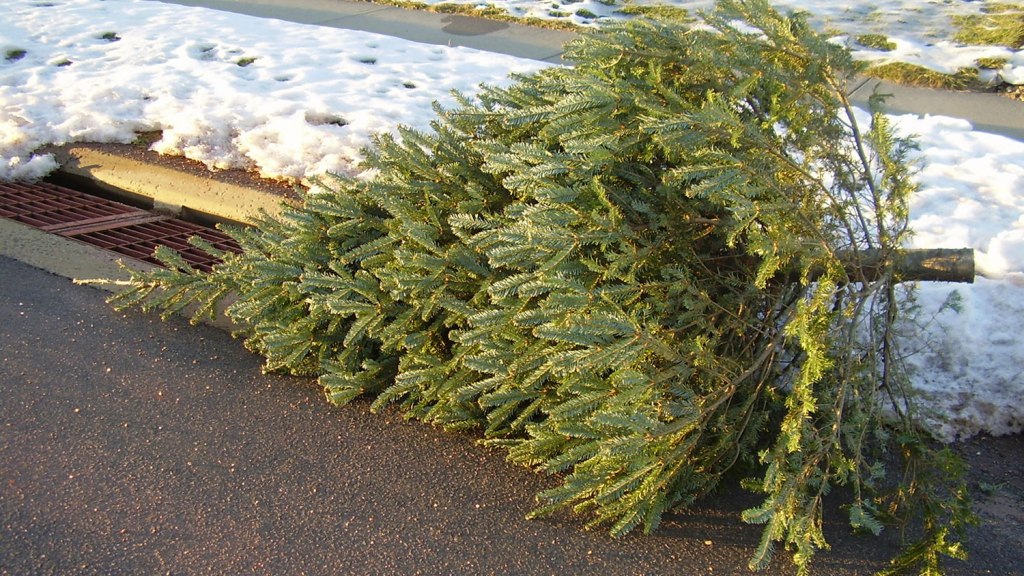 It’s late January, and many of you may still be willfully ignoring the very dead, very sad Christmas tree in your foyer. Good news: You procrastinators can take inspiration from Philip Harrison, head chef of The Anglesea Arms. He’s undertaken a new kind of urban foraging — complete with a dash of dumpster diving — by hauling the abandoned trees into his kitchen, hacking off the branches with a meat cleaver, and cooking with fir.

When Harrison was working at a restaurant in Iceland in 2012, he caught on to a disturbing trend: Each Christmas, thousands of fir trees are imported from Norway, only to be thrown out a few weeks later. The cook wondered: Could they be repurposed in his kitchen? Knowing that black forest ham is traditionally smoked over fir, and that Rene Redzepi, head chef at Copenhagen restaurant Noma, had cooked with conifers to great acclaim, Harrison asked a waitress to bring in her dead Christmas tree. He hot-smoked an Arctic char over its branches and a January tradition was born.

A year later he was back in London cooking at Anglesea Arms, whose kitchen door looks onto the spot where the block’s residents toss their trees each January. Harrison picked the freshest Nordmann fir from the pile, gave the branches a rinse, and set them to smoldering under salmon and trout. “Customers loved it,” he says. “It shows that we think about what we’re doing, using something that would have just been thrown away.”

He calls out the Christmas trees on the menu, saying they fit right in amidst foraged ingredients like chanterelles, trumpets, and purslane.

When it comes to curbing waste and fuel, sometimes it’s hard to see the forest for the trees. But this month Harrison and his cooks have “foraged” 16 trees from the sidewalk, using the branches and needles across the restaurant’s daily-changing menu. They’ve smoked everything from trout to duck and are about to try a whole leg of pork. Harrison’s also added fresh branches to a pan of roasting hake to flavor the fish like an aromatic herb, and developed a “Christmas tree mayo” by infusing warm rapeseed oil with the youngest tips. He serves the bright, piney condiment with a rabbit Scotch egg.

His city-foraged trees have even landed on the dessert course, in an ice cream where the needles stand in for vanilla. “I infused the milk and cream with the greenest needles,” explains Harrison, “and added a little lemon zest at the end. Customers tell me it tastes like Christmas smells.” That’s a far better fate for these trees than, say, perfuming the landfill or even the mulch pile.

Nor will the experiments end when the neighborhood’s trees disappear from the sidewalk — because Harrison’s squirreled away bags and boxes full of boughs, floor to ceiling, in his storage room. “It smells like Christmas all the time up there,” he laughs. And since a little bit in the smoker goes a long way, “I’ve got enough to last til next Christmas.” And every BTU of tree smoke is a little less fossil fuel burned in his stove.

Of course, some people — like Harrison’s own 3-year-old daughter — are shocked to see the cooks chopping up the symbol of Christmas, and returning butchered trunks to the trash pile. “But I explained to her, ‘We’re going to make ice cream!’” he laughs. “And then she got really excited.”

Try this at home

Harrison says cooking with Christmas trees is an easy DIY lifehack that actually involves hacking. First, scour the sidewalk for tossed trees — even dead-dry ones are just fine for smoking. Cut off the branches and give them a rinse. For a stovetop smoker, Harrison uses a large, very deep oven tray (that will hereafter only be good for smoking) and then sets a pan with holes in the bottom atop the first. Smoldering branches go in the bottom, and any pre-salted fish in the top. Harrison says salmon cooks in about 25 minutes, trout in eight.

Pro tip: Consider deactivating your fire alarm before beginning. If neighbors ask, “What are you smoking?” Tell them honestly: Christmas trees.