That poet of America’s parks, John Muir, penned numerous lines at the start of the last century that seem like they were directed at an audience in our distracted, gadget-loving age.

“Thousands of tired, nerve-shaken, over-civilized people are beginning to find out that going to the mountains is going home; that wildness is a necessity,” Muir wrote.

A century later, the tired and nerve-shaken seek head to the wilderness by the carload, except that instead of Muir’s thousands there are millions. Our national parks played host to more than 307 million visitors last year, the most on record. And at least half of them were probably hoping to snap a selfie with a bear.

While we know that you would never do anything so silly and dangerous, we’re here to spread a little park safety awareness for the over-civilized and phone-obsessed among us.

Embrace the outdoors; just not literally

People get far too friendly with all kinds of large, hairy mammals. Last year, five tourists in Yellowstone National Park were either tossed or gored by cantankerous bison. Park managers in Denver recently closed a hiking trail because people were taking too many selfies with black and brown bears. In another ominous sign, there’s a hashtag for the practice — #bearselfie  — and it’s increasingly popular. Elk don’t appreciate being your photo bae, either:

The likes on Instagram just aren’t worth it, people. If you’re close enough to take a selfie with a hulking, unpredictable wild one, you’re putting your life at risk. Look at these future contenders for the Darwin Awards:

Overconfidence may get you far, but there’s always a cost. Remember the shade Taylor Swift tried to throw at Kanye, and how he clawed back?

Yes, we all own the national parks. But that doesn’t mean you should go around like you just bought the joint, clambering across boulders in the middle of gushing rivers, like this guy in Washington’s Olympic National Park. Miraculously, he survived a plunge down three waterfalls.

This June, a young man stepped off a designated boardwalk in Yellowstone and fell into a 199-degree hot spring. It was the 22nd such death in the park’s history.

Technology only goes so far

In remote areas, drivers simply trying to find a trailhead can get steered off course by their GPS. They lead drivers down abandoned trails and dangerous paths. Rangers at Death Valley National Park have witnessed the tragic effects of our blind faith in satnav. They’ve even coined a term for it: “death by GPS.”

Although these trackers can be immensely useful, especially in areas of the park with no cellphone reception, it’s best to keep your eyes open when following them. For example, if your GPS unit tells you to drive into a lake, don’t.

Study routes and pick up a tried-and-true paper map, people. Those still exist.

We’ve all done some light stalking on social media stalking at some point in our lives, right? Nothing to be ashamed of there. How can you trust a person if you don’t know where she went for brunch last weekend?

So, do some homework up on your national park before heading out. Get the details. Go to its website and check out road conditions, animal sightings, actual non-GPS directions, and park-specific safety information. Follow the weather forecasts, keeping in mind that temperatures at say, the plains of Yosemite, are vastly different from the temperatures at Half Dome’s summit.

“Talk to rangers and volunteers at visitor centers before going on a hike,” says Jim Burnett, a retired ranger who spent 30 years in the parks and author of the Hey Ranger! Books.

Here’s a screenshot of alerts from the Olympic National Park on July 29, 2016. See how useful? 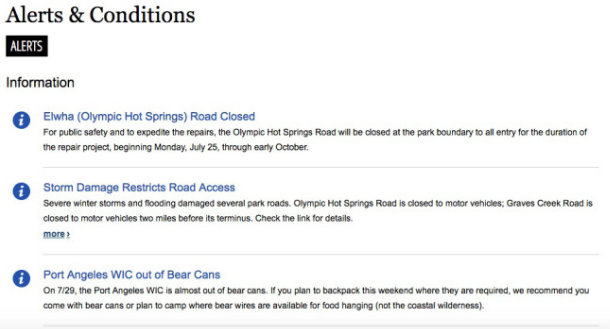 Now go forth and safely appreciate our big, beautiful parks.