On the night of Donald Trump’s election, I was eating guacamole directly out of a Tupperware, conveying it to my mouth via the scrappy tortilla chips from the bottom of the bag.

“This is very good guac,” I announced to my increasingly somber date as Wolf Blitzer declared Florida red. “Lots of lime!”

All of the food on the buffet table at the party had some sort of election-themed pun name. There was definitely something about Nasty Women and The Wall, and probably something Bigly. I couldn’t eat pretty much any of it, except the guacamole — its punny name lost to the sands of time and my numbed brain — because exactly 27 days before the Worst Day of 2016, I had decided to go vegan for a month.

When Pennsylvania, my home state, went for Trump, the question of whether to forego the joys of scrambled eggs seemed like the most meaningless thing in the world. But also, suddenly, it was one of the more stable things in my life.

Hmmm, I thought the next morning, after plowing through 50 Kleenex, Where should I get my breakfast smoothie today?

Maybe I will get Chipotle for lunch! Sofritas?! I pondered, trying not to meet the puffy eyes of everyone else who had clearly spent the morning weeping.

By the time I got into bed on Nov. 9, I was a damp shell. But I realized that I had made it through the day without eating a single animal product or even thinking about eating an animal product.

Well. That’s something. And then I slept for 11 hours. 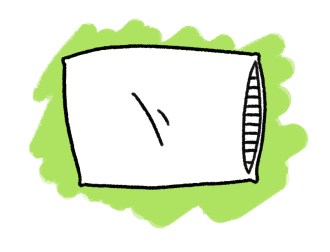 I launched my month of veganism on Yom Kippur, the Jewish Day of Atonement. The date was an intentionally ironic choice to atone for the sins of my eating past.

What sins does veganism address? In a nutshell, cruelty to animals and carboning up the climate via emissions-heavy animal agriculture — both of which are, in fact, Jewish sins.

Did I succeed in eliminating any and all animal products during my 30 days of veganism? (Actually, it was 35, but who’s counting!) Almost, but not quite — mostly due to mistake. Early on, I honestly believed that “vanilla milk” in a smoothie was a product of the bean itself, like its almond brethren. It’s not. A piece of fancy toast was advertised as being sweetened solely with jam but was absolutely slathered with butter, too. I had a strict “don’t ask, don’t tell” policy vis-à-vis any fish sauce in my takeout tofu eggplant stir-fry.

There are a couple of “on-the-fence” vegan foods, which include honey and oysters. I read the arguments for and against them and decided I could occasionally eat both. The idea of living through cold and cough season without honey was too torturous for me to fathom.

The Vegan Bros, who promote veganism as a means to better fitness, advocate a similar tactic. Though Matt and Phil Letten are brothers, they are also, in the spirit of bros everywhere, human endorphins. When speaking with them, it is hard not to think: If this lacrosse locker-room ebullience is the product of a plant-based diet, I want in. Which is, of course, their goal.

To the Bros, Americans’ love of animals and hatred of animal cruelty will usher in “the age of the new vegan.” When I ask them what that means, the answer is a verbal relay race — they finish each other’s sentences so quickly, it’s basically impossible to tell who’s talking:

“The [vegan] stereotype of the past was maybe someone more hippie, feminine —”

“But nowadays, it’s a cross-section of society where you have police officers, military, investment bankers, pilots —”

“— people who go to church every single Sunday! Now it fits everyone.”

The Bros take an inclusive approach to veganism: “We cast a big tent, and the goal is to bring people in. [We don’t] define vegan in this very stringent, hardcore way that is inaccessible to people.”

They’re definitely onto something. In November, Quartz chronicled the transition that the animal welfare lobbying group The Humane Society made in its messaging: Less emphasis on no animal-derived products under any circumstances, and more on fewer, better-raised animal products. The idea is that by getting consumers to demand more responsibly raised meat, as opposed to no meat at all, more animals would be saved in the long run.

This isn’t a new idea — you may have seen meat-reductionist philosophies show up in the form of such dietary terms as “reducetarian,” “climatarian,” and even “vegavore.” But its growing dominance among vegans — and those who have advocated veganism — is pretty new.

The best way to achieve vegan goals, it turns out, might not be to push perfect veganism at all. 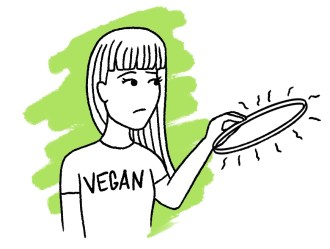 The majority of my family and friends — largely of the climate-minded, Big Mac-abstaining persuasion — were semi-horrified to learn of my experiment. Their responses ranged from: “Oh my god, you’re going to be so hungry,” to “How can we go out to eat together?” to “Is this going to make you less hot?” Pressing concerns, as you can see.

The day before the election, I had a conversation with Peter Singer, famed ethicist and author of the vegan bible Animal Liberation. His assessment of those reactions: “I think probably they feel threatened by it. They don’t want to change. If other people around them, their peers, are changing, then that points a finger at them.”

Vegans have a reputation for finger pointing, illustrated by a recent angry backlash against a couple of vegan restaurant owners who were revealed to raise and slaughter cows for personal use.

“The reason we’re so upset is that veganism is a belief system,” said one protester. “You are patronizing a restaurant that you think has that philosophy, and it turns out it doesn’t.”

But perhaps the idea of veganism as a philosophy, as opposed to a practice, is what’s working against it. A practice is something that you will occasionally screw up, but that’s fine, because you’re working on it every day. If you screw up a philosophy — like a religion — you have exhibited some form of moral failing. A slip-up becomes a sin. And if one has to be perfect in veganism, why try it at all? Perfect, after all, is impossible.

That’s how Singer describes it: “It starts to approximate to a religious attitude toward what you eat. It’s reminiscent to laws about kosher eating, or something like that — where any little lapse is as big as a much larger lapse, and I think that’s not what this is about. What I see it as about is reducing your impact on climate change, reducing your support for industries based on cruelty to animals.”

I asked if he sees that as a more helpful tack in converting people to veganism.

“Converting sounds a little too religious,” he countered. “It’s just persuading people to reduce or eliminate meat from their diets.” 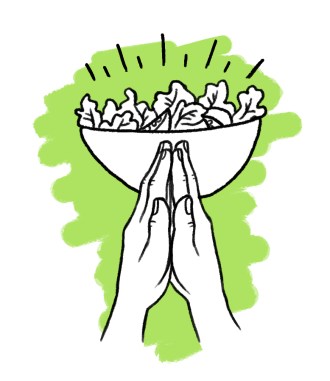 Meredith Leigh is an advocate for sustainable food with a focus on ethically produced meat. She’s an author, a farmer, a butcher — and an ex-vegan. In November, Leigh found herself on the end of a vegan harassment campaign that included doxxing her personal email address and phone number. The Let Live Coalition, an animal welfare organization, successfully opposed a butchering workshop that Leigh was set to lead.

Leigh continues to support the vegan cause because she says their goal is the same: to do away with the current, conventional model of animal agriculture. But there are a select few — a radical fringe minority, she emphasizes — within the movement that ascribe to a form of “dietary fundamentalism.”

“I think for the vegan fundamentalists, their dietary fundamentalism is tied to their moral fundamentalism — that no beings should die in service of your food,” she says. “And there are a million ways to argue with the practicality of that claim.

“But we have this culture where all of a sudden, if I disagree with you, I’m automatically undermining you. And we’re seeing it everywhere, you know.”

Leigh describes conversations she had with both vegans and ethical meat advocates after the election in which both were similarly distraught by the Trump victory. And yet, she still finds herself in the crosshairs of a group that ultimately wants the same things that she does. 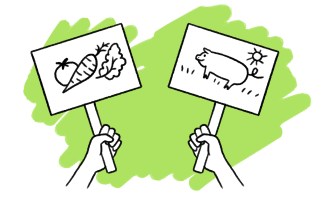 In one month of veganism, I didn’t learn the great secret to self-discipline or reinventing oneself or even butterless, eggless banana bread.

I did, however, try something that could have a big impact if it felt more accessible — and less dogmatic — to more people. I truly do not know if this approach can universally extend to the newer, scarier parts of my life — and every American’s life — but it’s probably worth a shot.

Food is so personal, such a visceral need, that it can elicit near-uncontrollable levels of emotion. Talk to me six hours past my last meal, and that will be abundantly clear. But there is something to be said for applying reason, restraint, and an open mind to the parts of your life within your very own sphere of control — like, you know, eating — right now, in a world when everything else feels so far beyond it.

Watch this video for tips and tricks for eating a more plant-based diet: