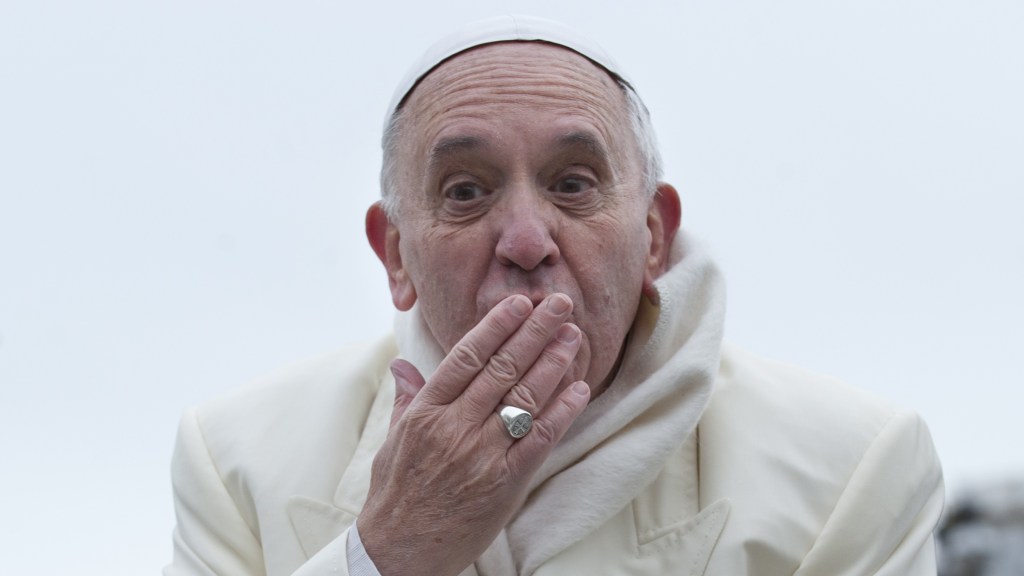 The first clue that Pope Francis might be a greenie came when he chose to name himself after Francis of Assisi, the patron saint of animals and the environment.

We’ve also learned that he likes riding buses and doesn’t like fracking.

Soon we’ll find out more about his views on environmental protection. The Associated Press reports:

Pope Francis has begun drafting an encyclical on ecology.

The Vatican spokesman, the Rev. Federico Lombardi, said the document was still very much in its early stages and that no publication date has been set.

Since his election in March, the leader of the world’s 1.2 billion Roman Catholics has made many appeals in defence of the environment.

His latest on Jan. 14 was in his so-called “state of the world” address to diplomats accredited to the Vatican, when he said, “God always forgives, we sometimes forgive, but when nature — creation — is mistreated, she never forgives.”

In a speech about two weeks after his election on March 13, the pope said he had taken his name after St. Francis of Assisi because he “teaches us profound respect for the whole of creation and the protection of our environment, which all too often, instead of using for the good, we exploit greedily, to one another’s detriment.”

If he calls for climate action, Francis will be following in the footsteps of his predecessors. As Susie Cagle explained in Grist last year:

Ex-Pope Benedict XVI, aka Joseph Aloisius Ratzinger, used his papal platform to promote social and political action in response to global warming, and even added an electric car to the popemobile fleet. His predecessor, Pope John Paul II, was also a proponent of climate action. And other Catholic leaders have spoken out about the need for a response to the impending “serious and potentially irreversible” effects of a warmer planet.

Now if Francis would just drop his sexist opposition to birth control and abortion rights (and ditch the homophobia, and crack down on pedophilia …), then we might start liking the guy.