It is not possible to spoil The Wave. I mean, it’s called The Wave — the film from director Roar Uthaug (yes, really) even opens with historical footage of a tsunami that took place in 1948, destroying the Norwegian tourist town of Geiranger. Everyone, we are told, knows that this could happen again, when a nearby cliff face collapses, sending tons of rock sliding into the water and a 260-foot wave toward the town tucked at the picturesque dead-end of the fjord. The villain of this story is signed, sealed, and — no spoiler alert — delivered a little over halfway through the film.

You’ve seen this movie before — except it was probably called The Impossible, or even The Day After Tomorrow. The plot is well-trod territory: Nature throws a real doozy at a smug town/country/civilization, on a scale too enormous to really comprehend. So we find one family to follow, rooting for their reunion against all odds. Along the way, people will die, probably a lot of them, but we’re never sure who it will be.

About that “who:” The Wave opens with touching early scenes of domestic bliss around the one family we are to follow through this ordeal, in a town full of kind, slightly oblivious Norwegians looking forward to a busy summer tourist season. The father is a jumpy geologist on the team that monitors the unstable fissure, and the mother is a handy hotelier who we meet as she’s casually fixing a leaky sink (foreshadowing a dexterity with tools and a willingness to get her hands dirty that will become darkly useful later). There’s the requisite father-and-teenage-son tension, as well as the wise-beyond-her-years younger child, whose innocence will be challenged but will nevertheless be the one thing to emerge from the film’s eponymous disaster relatively unscathed.

But what The Wave lacks in shock value, it makes up for in suspense. This is a familiar horror of a different sort. While we don’t all get to live our lives around UNESCO World Heritage-level scenery, we do all live with calculated risk: when we drive on the highway, when we lick the raw cake batter out of the bowl, when we (god forbid) step into the shower without one of those sticky bathmats. And, of course, when we live in the era of climate change — but more on that in a minute. My point is that death lurks in everything — and at some unknowable but definite point, it strikes.

One of the scariest images of the film arrives in the first couple of minutes. Spliced in between grainy black-and-white footage of what looks like some heaps of kindling (those are the remains of Geiranger the First) is a dynamic chart that flits across the screen: an illustrated mountain face shearing off into a calm, light blue basin below. The displaced water mounts from sine-waves into terrifying spikes as it crowds against the opposite wall of the fjord. The rest of the movie is basically a higher-quality CGI version of this vignette. 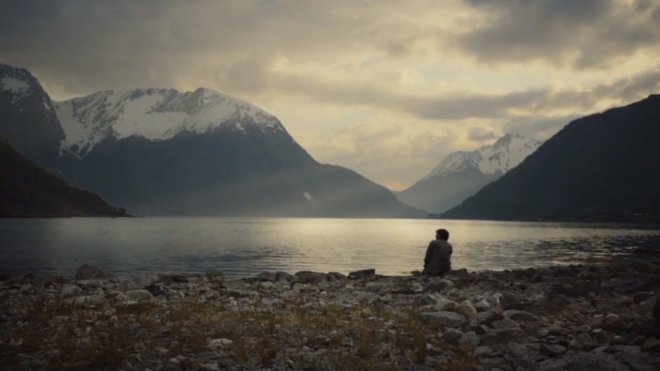 The contrast between the innocuousness of this chart and the horror of the reality it represents permeates the film. Geirangerfjord is, of course, beautiful, and the movie exploits this, lingering over long shots of clear blue channels meandering through granite canyons, of surging mountains draped in green velvet and backed by watercolor gradients of day to dusk. We see it from the air, we see it from the water, we see it from the dock where our protagonists contemplate the routine wonders of the place they call home.

Likewise, the risks of living in the sleepy tourist town are both extreme and mundane. The scientists — including the movie’s protagonist — tasked with monitoring the crevice that could kick off the next tsunami are good at their job, but they’ve been doing it for so long that a true emergency is entirely theoretical. It’s numbers and bars on a screen. And when they do start to see signs of trouble on their displays, it is not what they’re expecting: The crevice contracts instead of widens? Must be a problem with the sensors. That’s the cue for the gruff-but-kind lead scientist to bullheadedly insist they “check things out” — and you can surmise the rest.

In the ensuing devastation, we get a glimpse of the scale of the carnage, as our protagonists barrel past in an against-all-odds quest to stay alive, and stay together. A few recognizable secondary characters are not as lucky, but we only have a few minutes to linger over the cumulative tragedy before we must rush onward to knit our adorable nuclear family back together. This, too, is the way of this kind of film — but in real life, we don’t all get to be the protagonists.

Geiranger is a real place under real threat. The problematic Åkerneset Crevice, as the film informs us in the wrap-up, is still poised for collapse — and someday, it really will fall.

I think I know how those cheerful, doomed Geirangerians felt. I live in the Pacific Northwest, and someday there really will be a mega-earthquake that will likely liquefy parts of Seattle and shake my old, unreinforced brick apartment building apart like a stack of blocks. I think about this a lot, but it still doesn’t feel real — and I doubt it will until it’s happening. In the meantime, maybe I will pack myself an earthquake kit, at least, and try to have a plan.

And my hands-off, come-what-may approach to impending disaster is no exception — quite the contrary. We’ve all seen the charts and tables that foretell climate change — whether they inspire the proper horror or not, we know what they mean. Residents of New York and New Orleans and Miami live with the knowledge that the next Sandy, the next Katrina, is coming sooner rather than later. Sea level rise and climate change are building bigger storms that will smash into more and more already-battered cities.

People will die — it’s only a matter of when. And — as the movies remind us again and again, but we will never really understand until it happens for real — a matter of who.