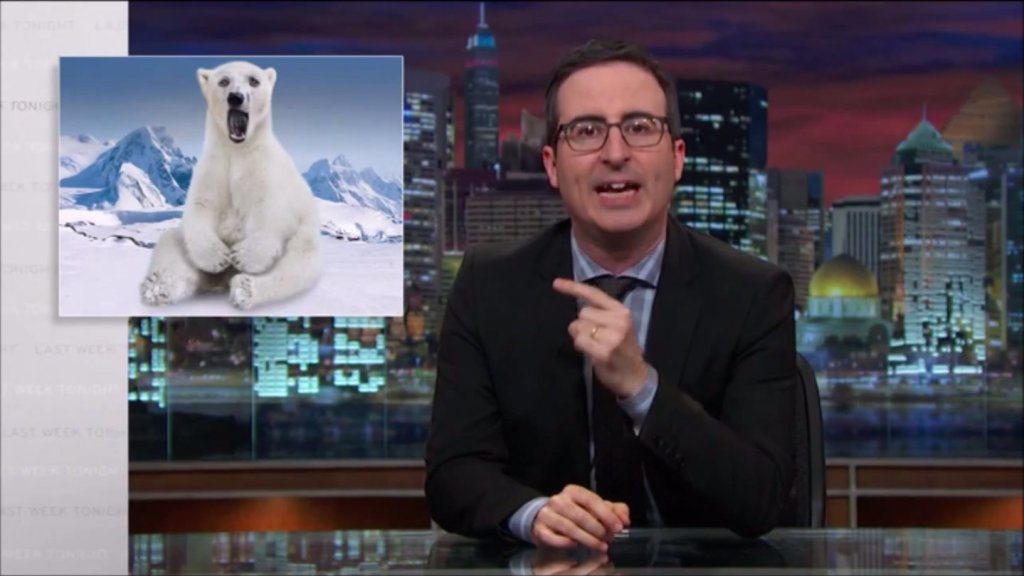 It’s almost Earth Day, people — the one day a year where the masses join us in solving the climate crisis by making demonstration rafts out of Dasani bottles or line-drying their jeans.

We don’t mean to sound cynical: There are plenty of meaningful projects planned for Earth Day (see Usher dancing on crutches!) that really could help move the needle on climate action. Even Obama is saying smart things this Earth Day.

But as caterpillar-eyebrowed manbabe John Oliver points out in a clip from last night’s show, Earth Day has a bit of an image problem. An imperiled polar bear floating on an iceberg just isn’t a potent enough symbol any more; we’re too inured to dead animals at this point. (And let’s not even talk about the NSA’s nightmare-inducing anthropomorphic recycling bin, Dunk — it looks like Guillermo Del Toro designed a monster for Everybody Loves Raymond. No thanks!)

Instead, Oliver introduces us to a new mascot who represents an ursine tragedy we’ve covered before: Marshmallow, the polar bear whose penis bone has been weakened by pollution. More from Oliver:

“C’mon, everyone — this Earth Day, I want you all to think of Marshmallow’s devastated penis. Because while it may not be salvageable, others could be. Clap your hands if you want hard polar bear penises. We can do this.”

Oliver nailed it. Now clap your hands so polar bears can, too. (And watch the clip here.)