Water cooler talk: Should our office ditch that big fat upside down jug? 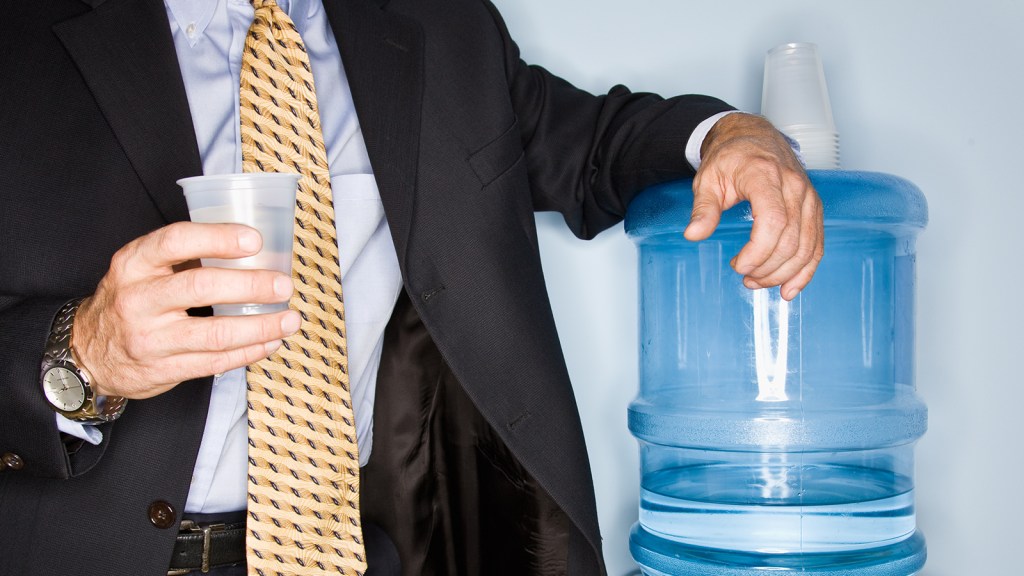 Water cooler talk: Should our office ditch that big fat upside down jug?

I was excited to receive your question, because of (1) its inherent value, and (2) your correct use of the word “an” before “historic.” Be still, my grammar-loving heart.

Now, on to this water business. Nestle does indeed operate five bottling plants in the Golden State (all of which might be called a desert these days). And though the company has drawn some heat from drought-concerned citizens recently, it is far from alone in this: Your state hosts 110 total plants, including ops from big players like Pepsi (Aquafina) and Coca-Cola (Dasani). Together, they draw the liquid of life from springs – the source of 55 percent of U.S. bottled water; from groundwater; or from the tap. (Yes, you read that correctly. Some companies take tap water, treat it, then bottle it up and sell it back to us at a huge markup.) All this activity is not exactly running California dry, though: Together, bottled water companies account for far less than 1 percent of the state’s total water use.

Lest you think I’ve had a change of heart about the bottled-water business, Betony, let me be clear: I am not a fan. And your letter brings up another excellent reason why. Bottling companies do use water in the process of bottling, um, water – beyond what’s just going in the toss-away plastic vessel. (It’s going toward facility needs, like cleaning and water treatment.) Just how much water is a matter of some debate. According to a 2013 study commissioned by the International Bottled Water Association, it’s an average of 1.39 liters of water used to produce every liter of drinkable water – which isn’t too shabby compared to other beverages, such as soda or beer. Coca-Cola reports a slightly higher average of 1.63 liters per liter for its California water bottling.

That means that sipping from the tap would save you and your colleagues about 7.4 liters, or 1.9 gallons, per jug on the cosmic scorecard, if we use the industry estimate. But let’s not stop there: Some eco-experts argue we also have to consider the water that goes into making those plastic bottles to get a true water footprint. Three whole gallons of water may go into producing a half-liter bottle, significantly upping our water tally.

The bottled water-industrial complex has an answer for your second question, too. According to that same study, producing office jugs racks up an average of 1.63 liters of water use per liter of sippable water, compared to 1.36 liters per liter for smaller bottles. But the footprint is higher because many companies wash, sanitize, and reuse those five-gallon office jugs (up to 35 times, says Nestle), while individual bottles typically take a dive in the recycling bin (or worse, trash) after one use. There are too many variables to be sure how it all shakes out, water-wise, but the jug system certainly has the edge with plastic use.

One thing I do know is that drinking from the tap is the most efficient way to go. Couldn’t your office use a new environmental campaign to liven things up a bit, Betony? And if not you to spearhead an anti-water cooler crusade, then who? If a water cooler is an absolute necessity, head over here for my thoughts on that.

But really: tap the tap! Say, now your office campaign even has a catchphrase.