What's worse, burning plastic or sending it to a landfill? 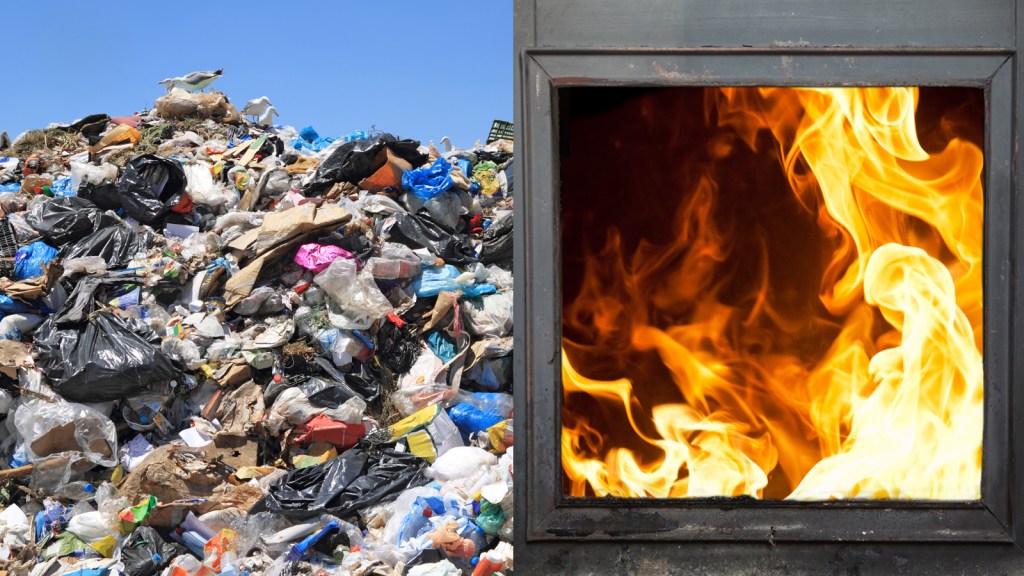 What’s worse, burning plastic or sending it to a landfill?

What’s worse: burning plastic trash, or letting it sit in a landfill? I’m thinking of not-easily-recyclable plastic packaging especially — are its components perhaps more easily dispersed as gases rather than slowly leaching in a landfill?

As anyone who has ever witnessed someone toss an errant water bottle or crinkly wrapper into a campfire can attest, burning plastic is a nasty business. It stinks; it spews oddly colored flames; and the smoke makes you want to reach for the nearest gas mask. I distinctly recall one such instance in particular, in high school, when a perfectly lovely beach bonfire was ruined because a doofus classmate threw our life-size stuffed mascot into the fire (thanks, Dwayne). Willy the Wombat sustained serious scorch injuries, and everybody else had to flee in search of more breathable air.

Then again, landfills are hardly a great choice for waste management, either, what with their space-taking, greenhouse gas-generating ways. So in a head-to-head, what is the best option for handling non-recyclable plastics? The answer depends on what kind of burning you’re talking about, Wilburforce.

If you’re referring to burning your own plastics out back, then heavens, get thee to a landfill. Burn barrels and other backyard incineration methods release terrible, toxic smoke packed with dangerous chemicals, and plastics produce some of the worst offenders. Among them: dioxins and furans (hormone-disrupting, cancer-causing substances that build up in water, soil, crops, and our own bodies) and styrene gas (which damages the nervous system). This sort of thing is dangerous not only to you, the burner, but to your neighbors. Much better to sequester your plastics in a landfill — if those are your only two options.

But if you’re referring to large-scale trash incinerators, often called waste-to-energy plants, then the picture gets a lot fuzzier. Such plants torch garbage at very high temperatures, creating steam that is then used to generate electricity and sometimes also heat buildings. They are quite popular in Europe, where they don’t have nearly as much open space to fill with landfills as we do, but they remain rather controversial around these parts.

Proponents of waste-to-energy (let’s think of them as the Fire Planeteers) argue that these facilities are a great idea because, for one, they reduce the staggering volumes of garbage we create. The average American is personally responsible for generating 4.4 pounds of trash every day, but incinerators can turn 2,000 pounds of waste into 300 to 600 pounds of ash. They also say keeping garbage out of landfills prevents the emissions of globe-warming methane and is more efficient than trucking trash to faraway dumps. Plus, plastics generate more energy than other refuse when burned. Their thinking goes: Since we’re throwing most of our plastics away anyway — recycling rates are stuck around 30 percent — why not burn it to recover that energy? Otherwise, we’d probably be burning a virgin fossil fuel for the same power.

Anti-burners (the Earth Planeteer seems like a good fit here), on the other hand, are concerned that incinerators spew the same noxious chemicals we discussed above — dioxins, furans, heavy metals, et al. They still create toxic ash that ends up in landfills, and those high-temp fires emit more carbon than a coal plant. And they distract us from the real solutions, opponents say, which should be recycling and composting, not simply burning. In some places, communities have to supply a certain amount of garbage to a waste-to-energy plant to keep it in the black – which can mean perfectly good recyclables end up diverted to the flames. In other places, incinerators primarily deal with non-recyclables.

Rebuttal time: Fire Planeteers retort that high-tech scrubbing tools keep their chemical emissions well under EPA air quality standards. Earth Planeteers counter that the methane from landfills can be collected as biogas and burned for power, too. Both sides then say the other’s methods aren’t good enough, and meanwhile troubling emissions still leak through. And on it goes.

My take, Wilburforce? There’s no perfect solution to plastic disposal, so what we really should be doing is creating and using less plastic — especially the types that can’t be recycled easily. On an individual basis, this means steps such as buying in bulk, using reusable containers for everything, and shopping secondhand (find more zero-waste tips here). More broadly, we need to urge manufacturers to stop using throwaway plastic packaging — write your favorites and tell them so (see, there’s always something you can do!). I’m hopeful that one day, we’ll reach a point where consumer materials are reused and recycled ad infinitum. Until that day, don’t forget your coffee mug, reusable takeout container, party glasses, menstrual cups … and on it goes.