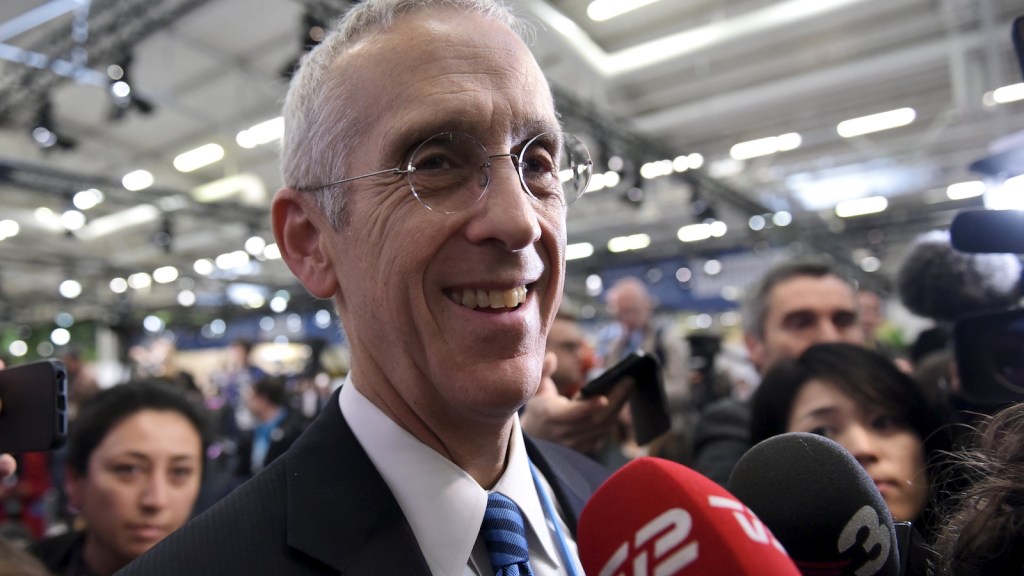 Before the Paris climate agreement enters its next stage – getting signed by 155 countries at the United Nations headquarters on Friday – I caught up with the United States’ outgoing special envoy for climate change on the phone. Todd Stern, who has stepped down to pursue teaching and other projects, was digging himself out of seven years of paperwork in his State Department office.

Stern’s departure comes after he helped the Obama administration accomplish its goals at the Paris conference (COP 21) in December, laying the groundwork for the first global climate agreement to cover the vast majority of greenhouse gas emissions.

The future of the Paris agreement is far from secure; 55 countries representing 55 percent of world emissions need to ratify it and its effectiveness relies on countries delivering on (and exceeding) their national pledges. And of course, the U.S. government’s position remains tenuous until the next president takes office.

Stern’s career in international climate politics dates back to the ill-fated Kyoto conference of 1997. His experience putting together deals at Kyoto and Copenhagen, and watching them unravel, could explain why Stern insists the Paris agreement will succeed despite all the challenges. In our recent interview, Stern said he doesn’t wring his hands and wonder, “Oh, my God, what if” the whole thing unravels, because he doesn’t see it happening. “Call me crazy, but I don’t think so.” After all these years of working in painstakingly incremental climate negotiations, Stern remains an optimist.

This interview is edited for clarity and length.

Q. How does it feel to be packing up?

A. I ended up staying, probably a lot longer than I originally intended when I started in 2009. At some level, we were officially working on this particular negotiation for four years [since the end of 2011] but were really working on the whole thing for seven. I wanted to stay and see it through to the end, and it worked better than anybody had hoped. So this is a good time for me to go.

Q. Do you have any regrets from how you approached the Paris talks and any regrets about the outcome?

A. With respect to Paris, I don’t think that I would say we had real regrets. Obviously, there’s a lot more to do. We made a start, and there’s a tremendous amount of follow-up to do, so it’s not like I’m saying Paris is the be-all and end-all, because that’s certainly not true, but in terms of what’s achievable in Paris, I think we did pretty well.

Q. Paris still left a lot of issues unclear. What needs to happen at the next United Nations climate conference in Marrakech, Morocco?

A. There are a set of different follow-up actions that are called for by the Paris agreement or the accompanying decision itself. You need guidelines for transparency; there are issues on accounting and finance.

All of those follow-up measures that are called for need to be negotiated and worked out over the course of the next few years. There are a small handful of things called for in Marrakech itself, but mostly, we’re talking about beyond Marrakech.

Q. What do future conferences need to accomplish to resolve outstanding issues?

A. In 2018, there’s going to be the first five-year global stock take of how countries are doing on the global emissions goals. Then, two years after each global stock take, there will be a review, with the first one happening in 2020.

Some countries have five-year targets, some countries have 10-year targets. Countries with five-year targets will be putting in a new target. Countries with 10-year targets might be putting in a new target in 2020; their target might still be running for an additional number of years, but they are required to take another look at it in light of science and technology development and make a determination as to whether they should increase it. They have to submit something in writing about whether they’re going to stay where they are or increase it. That’s the kind of ratcheting processes that are going to happen every five years.

Apart from the specifics of what happens in the COP [United Nations climate conference] process, the most important thing is what countries do nationally to drive the emission reductions, drive the transformation from high to low carbon that is required to solve the problem. A lot of it is going to happen at the national levels, even sub-national levels.

Q. What did you learn from your experience at other climate conferences that helped the U.S. position in Paris?

A. Going all the way back to the Kyoto and Buenos Aires conferences in ’97 and ’98 — my first exposure to this issue — one thing I took away was that it was going to be very important, diplomatically, to create a forum where the major players, both developed and developing, get together on a regular basis at a high level and have a civilized, calm, reflective, candid conversation about whatever the hard issues were at the moment.

Coming to the Obama administration, we took President Bush’s Major Economies Forum and we gave it a mission to advance the negotiations with high-level administrators coming together three or four times a year.

I think my sense of needing to do that came out of experiencing the kind of circus and cacophony of my first two U.N. climate conferences.

I always have tried to think both forward and backward. Whatever year you’re in, think about where you want to land, and then try to walk backward to how you’re going to get there. That’s an evolving process. What you think in March is not going to be the same thing that you think in May.

Somebody famous said, “Everybody has a plan until they get punched in the mouth.” This is a slightly more diplomatic version of that. I’ve always tried to be very direct and candid with people, and I think that’s not a diplomatic lesson I’ve learned, I think that’s just my nature that I brought to the job.

When negotiating, I always wanted to have in mind, “We could go this far and we couldn’t go further.” You’re trying to find where the common ground is, where the landing zone is.

Q. How much does it affect negotiations when you have candidates for president who are actively undermining your message?

A. As the noise from the campaign gets louder and louder in this election year, obviously people are paying attention to what the candidates are saying, and I’ve been asked plenty of times about that. I mean, I’m still at the State Department, so I’m not gonna get political here. But I don’t believe any president is going to pull us out of Paris, because I think quite apart from climate change, the diplomatic fallout would be so serious.

Q. I saw you said that President George W. Bush took “lots and lots of diplomatic flak,” for rejecting the Kyoto Protocol, but despite the fallout, we still didn’t see any progress on global climate action. While there would be fallout for pulling the U.S. from the Paris agreement, how does that ensure the next president might not do it anyway?

A.That’s a fair question, but I think it’s a different situation, really. You know, Kyoto was a good try, but Kyoto covered really a fairly [limited] number of nations around the world. It was a good effort, but it was also flawed.

I think what you have now is, first of all, a much broader understanding and realization of what this issue is about and what the risks are by countries all over the world. And you have a structure here which is designed to be long-lasting, designed to be inclusive. It would just be seen as a huge step backward for the United States to do this.

Even with respect to Kyoto, the United States took a really big diplomatic hit for doing that, and I think the diplomatic hit here would be just an order of magnitude larger than was true for Kyoto.

Q. Have you ever thought about what it would feel like to watch this unravel after years of effort?

Q. OK, well, I don’t want to end on such a pessimistic note on my part.

A. I mean, honestly, I don’t, though, Rebecca. You asked me a straight-up question. I don’t go around wringing my hands about, “Oh, my God, what if” because I actually don’t think that that’s going to happen. Call me crazy, but I don’t think so.