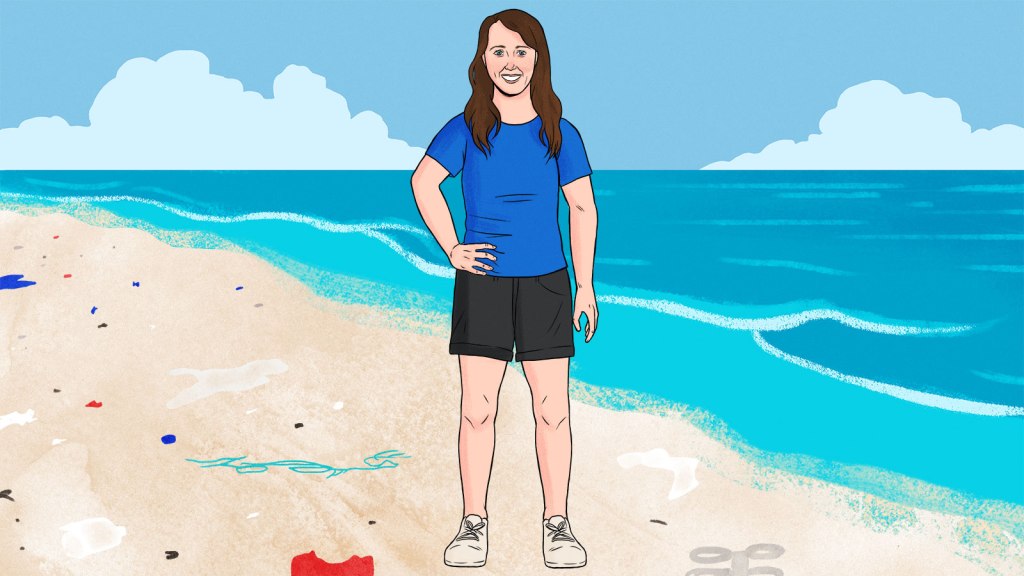 When Carolynn Box left for her first 5 Gyres research expedition in 2011, it was Christmas Eve. She talked her way onto the organization’s trip, and had been peppering the ship’s captain with safety questions for weeks. She traveled with a friend from San Francisco to Namibia to meet up with the 5 Gyres boat, which was set to comb the vast South Atlantic Ocean gyre for plastic waste. She was abuzz with nervousness.

“I’m not a professional sailor … I was scared of sinking, or things going wrong during a really big storm. I didn’t want to die,” says Box.

But when she finally stepped aboard, she remembers not wanting to ever get off the ship, even when things took a frightening turn:

“My first trip was 33 days. We had a problem with our engine. The engine broke a thousand miles from anywhere. It was crazy. … So then we had to sail home. I remember my captain, Clive, said ‘Well, this is a sailboat. We’re going to sail to Uruguay.’ And that’s what we did. It took a lot longer than we expected because we had to wait for wind. So that was startling,” Box says.

5 Gyres is a nonprofit that organizes plastic pollution research expeditions at sea. In addition to trawling for plastic garbage, 5 Gyres and their volunteers have restored beaches through international citizen science programs and developed laws banning plastic microbeads from cosmetics.

Unfortunately, there’s no shortage of source material: In 2010 alone, an estimated 10.5 billion to 28 billion pounds of plastic waste entered the oceans. When Box returned from the 5 Gyres trip, she went back to her coastal management job in California, but the weight of all that plastic junk wore heavily on her mind.

In 2012, Box joined 5 Gyres as the org’s environment and education programs director. (The nonprofit’s name refers to ocean gyres, in which currents swirl together with the help of wind. These water systems notoriously attract tons of marine trash.)

Today, Box helps train expedition volunteers and supports a new wave of first-time sailors. We talked to Box about what she’s learned from life on the deck of 5 Gyres’ research vessels. Here’s an edited and condensed version of what she had to say:

Q. How do you prepare newbies for being out on the ocean?

A. Most of the people that come with us are very well prepped for the experience. If they’ve never sailed, some have tried out sailing just to get a sense of it. But I don’t think you can prepare yourself for being so remote.

Most people can handle it. We’ve had people get scared, but you just talk them through. Most people don’t show that they’re scared. The [first couple days] can be very rough because people get really seasick.

Q. Are people seeking out these expeditions? Why do they want to do it?

A. On all of our expeditions, we’ve had students, activists, surfers, sailors, partnering scientists with their own projects, artists, musicians, and other nonprofit partners.

I think many people who work in the field of plastic pollution are looking to have first-hand knowledge. You can really speak to the issue stronger when you can say, “I’ve been out there. I’ve seen this firsthand.”

What’s so great getting people from different communities [is that] you reach more people.

Q. You’re basically a seasoned sailor at this point. How do you prepare for these long expeditions?

A. On this last expedition, I was made fun of because I had been exercising quite a bit beforehand. Many of the people [running] the boat are used to being sailors, they have a lot of strength. When I’m on the boat, I want to be as strong as I can be and I want to pull my weight. I don’t like to sit back and just let the guys do it.

Q. Some of your trips can last for more than three weeks. What’s it like, being on the water for that long?

A. You know that feeling you get when you watch the sunset? It’s almost overwhelmingly beautiful. When you’re on a sailboat, at least for me, even when it’s a wild and crazy ocean, it’s this really amazing and exciting world that’s all around you. I love it. I love being out there engulfed in all of it. When you see whales or dolphins around the boat. It’s so exciting and so meaningful. It’s kind of like, “Hey guys, we’re here to help you!”

Q. That being said, how does it make you and your fellow sailors feel when you are trawling for plastic?

A. It’s terrifying and you’re in the middle of nowhere and it’s clear that what you’re pulling in [isn’t] natural. It’s clear that it’s plastic.

I’ve been on six oceans trips and it’s very rare that we pull up a sample that’s plastic-free. For the most part, every single sample we collect has plastic fragments in it. That’s really powerful when you’re on a trip in the middle of the South Atlantic.

Seeing all the [pollution] samples … lights a fire under you. Something needs to change.

Q. Terrifying amounts of plastic aside, what is your most memorable moment at sea?

A. I made eye contact with a humpback whale as I left Honolulu to head out to the North Pacific Gyre. The whale followed our boat for a few minutes and leaned over and looked up at us — she just stayed on her side looking at us — she was very curious. I like to think she understood we were working to keep her ocean healthier.