“I have an unhealthy — or, I would like to say, healthy — obsession with poop,” says marine biologist Asha de Vos. Specifically, she’s stuck on kind that comes out of blue whales living off the coast of her homeland, Sri Lanka; in fact you could even say she built her career on a pile of this shit.

When de Vos found the red, gloopy stuff floating at the surface of the North Indian Ocean, it was her first clue that this population of whales behaves very differently than previously thought. While a student, de Vos was taught that all blue whales are migratory, feeding at the poles and coming to the warmer waters in order to breed and give birth. But blue whales are still a mysterious bunch — especially the ones near Sri Lanka, since no one studied that particular population until de Vos began to in 2008. After repeatedly coming across blue whale poop at sea, she realized that the local population actually stays there year-round. 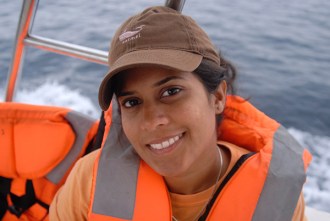 For a woman growing up in Sri Lanka, marine biology was one of the most unorthodox fields de Vos could have chosen. “Most people are encouraged to be doctors, lawyers, engineers, or business people,” she says. But “as a child I wanted to be an adventure scientist. I wanted to be the one who discovered things and saw things that no one else saw, explore places no one else would go.”

After becoming the first Sri Lankan to get a PhD in marine mammal research, de Vos has become a pioneer in the study of blue whales, making discoveries that have been recognized across the globe. “My parents just said, ‘Do what you love and you’ll do it well,’” she says. “And I do what I love.”

We talked with de Vos about her smelly passions, the biggest threats to whales today, and why the Save the Whales movement needs a makeover. Here’s an edited and condensed version of what she had to say.

I was along the southeast coast of Sri Lanka, working on a research vessel that was tracking sperm whales. I was on deck, just keeping an eye out — it was one of those flat, calm days with no winds. In the distance I saw a tall, lofty, powerful spout. I was like, “this is not a sperm whale, this is definitely something different.”

I went to the captain and said, “We have a blue whale, we should go check it out.” As we drew nearer, I realized it was six whales, in an area like the size of a soccer pitch. It was unbelievable. Because there was an aggregation of blue whales in warm, tropical waters, I just assumed they would be breeding or calving, based on what my textbooks had always said.

As we approached, I was just thinking, “This is going to be awesome!” No one had ever documented blue whales breeding before. And then we got closer — and they weren’t mating. I was disappointed. Like, “what the heck are they doing?”

And then one of them pooped. That was my moment. I was like, “Wait a second … why is this animal pooping here. Is it feeding here??” That’s where my quest began.

I think whale poop is just fascinating. It’s not that it doesn’t smell — it’s definitely got a funky stench to it, kind of like old fish. Maybe it’s the color, this beautiful red from the tiny, shrimp-like creatures the whales eat. It makes you mesmerized, makes you willing to pick it up.

There are three kinds of information we get from whale poop. It only floats on the surface for a short while before it disperses — so, first if I see a pile of whale poop, I know that there’s a whale close by. So that’s awesome. The second thing it tells me is that they’re feeding in those waters, which is cool. Lastly, when you dig through poop you find pieces of baleen in it — and different species of whales have different colored baleen. Blue whales have black baleen; so if I dig through and see short black baleen, I can be reasonably sure that it came out of a blue whale.

In general, whales dive down deep to feed, where there’s iron and other nutrients that you don’t find very much of at the surface, and then they come up to the surface to breathe. And when they come up, they poop. In doing this, they’re releasing all of those nutrients into the surface waters. Nutrients that support all the little things, like phytoplankton — the microscopic plant-like organisms that are the base of the food web in the ocean, and also a source of oxygen for all of us. So whale poop is extremely important.

If you look at a map of shipping traffic, the main shipping artery through the Indian Ocean goes right along the south coast of Sri Lanka. It’s one of the busiest shipping areas in the world, connecting huge ports like Singapore and Dubai. Globally, shipping has doubled since the ‘90s — but in the Northern Indian Ocean, where I work, it has quadrupled.

To give you a sense: In March 2012, in Sri Lanka, we had a whale that came into the harbor wrapped around the bow of a container ship. We knew it was killed on impact, because it was a fresh carcass and there were signs of internal hemorrhaging. Twelve days later, we saw a carcass at sea that had a huge gash on it, that was very obviously killed by a ship strike. So that’s two incidents in 12 days. That’s [too many] for any population of animals. And there’s research that says for every whale that we do document that’s killed by a strike, there are at least ten others that go undocumented.

There’s a recent study where they tagged blue whales in California and tracked where the ships were in relation to these whales. They saw that when a ship came close, the whales would very often dive at the last minute — if at all — and they would do pretty shallow dives.

These animals evolved over millennia without any marine natural predators. So they don’t know that if there’s something bigger than you in the water, then you move out of the way. Relative to how long these whales have been evolving in the ocean, ships are relatively new threats.

My curiosity about these whales is really driven by this ultimate question of conservation: How do we understand what they’re doing and what their needs are, what do we need to do to support this population in light of this threat, and how could we then mitigate it.

The “Save the Whales” movement was great; they did what they had to do back in the day. But right now a lot of the advocacy groups are still largely focused on anti-whaling campaigns — and, in the world we live in today, whaling is no longer the biggest problem in our oceans for whales. Since the International Whaling Commission put down the moratorium in 1986, whaling is sort of, thankfully, a problem of a bygone era.

The reality is that the problems these whales face in the oceans on a day-to-day basis are things we all contribute to. So we’re all kind of guilty. I can tell you right now that I’m wearing at least two pieces of clothing that were shipped around the world. Ninety percent of everything is shipped — and shipping is still on the rise. The more ships you have, the more whales are going to get hit and killed.

I feel we are basically doing nature a disservice by not talking about the functional role of different things in our ecosystems. It gets frustrating when people are like, “oh, you work with whales because they’re beautiful and charismatic.” I’m like, “They’re actually way more important than that!” Because people are inherently selfish and want to know how things benefit them, it’s important to talk about the context in which these animals are important if we want to get people to care. So that even the many people for whom the ocean feels far away and removed, who may never get to see a whale in the ocean, think, “The fact that they’re out there means we have phytoplankton blooms that give rise to oxygen, which means I get to breath.” Whales are not just pretty faces; they’re ecosystem engineers that are critical for ocean resiliency.