In more sane times, it would be natural for the Boy Scouts of America to share its do-gooder image with the U.S. Environmental Protection Agency. The two institutions recently announced a special award for scouts that commemorates the EPA’s 50th anniversary. The award is given after a scout earns merit badges in earth sciences, animal studies, outdoor activities, and public health, and completes a public health or environment-themed community service project.

EPA Administrator Andrew Wheeler, an Eagle Scout who claims that scouting is where he “learned to love the environment,” said he hopes the award calls attention to the agency’s successes over its five decades in existence. Roger Mosby, the CEO of Boy Scouts of America, or BSA, and a retired founding officer of the fossil-fuel pipeline developer Kinder Morgan, said he expects the partnership to “challenge and empower scouts to learn more about and care for the world around them.”

Ironically, any scout who learns anything about the EPA will quickly become aware that Wheeler is purposely running the agency into the ground. Like fellow Eagle Scouts Rick Perry and Ryan Zinke, the respective former Energy and Interior secretaries, Wheeler’s self-proclaimed love of the environment is nowhere to be found in carrying out President Trump’s scouting-incompatible, scorched-earth mission to undo the last 50 years of environmental protection.

I take no joy in making this point, being a former scoutmaster and the father and uncle of Eagle Scouts. The program has been magical in our progressive Cambridge, Massachusetts — despite the national organization’s former bans on gay members and girls working toward Eagle Scout, mounting charges of child sex abuse, and still overwhelmingly white top leadership, which is often drawn from industry and government. Recent national chairs of the BSA include former Defense Secretary Robert Gates and Rex Tillerson, former ExxonMobil CEO and Trump’s first Secretary of State.

Our troop, long-inclusive and in a more-liberal, Boston-area council, has inspired many of our scouts to pursue opportunities in the Peace Corps and national parks, and careers in climate resilience and sustainable city planning. I’ve seen teen boys cry when they realized they were not doing their fair share on backpacking trips. I’ve seen our girls, some less than 100 pounds, climb 12,000-foot mountains with full backpacks, causing jaws to drop among scouts and adults affiliated with other troops. I’ve seen these youth care so much for other creatures that on one occasion, they held a funeral, complete with a makeshift grave, for a dead lizard. 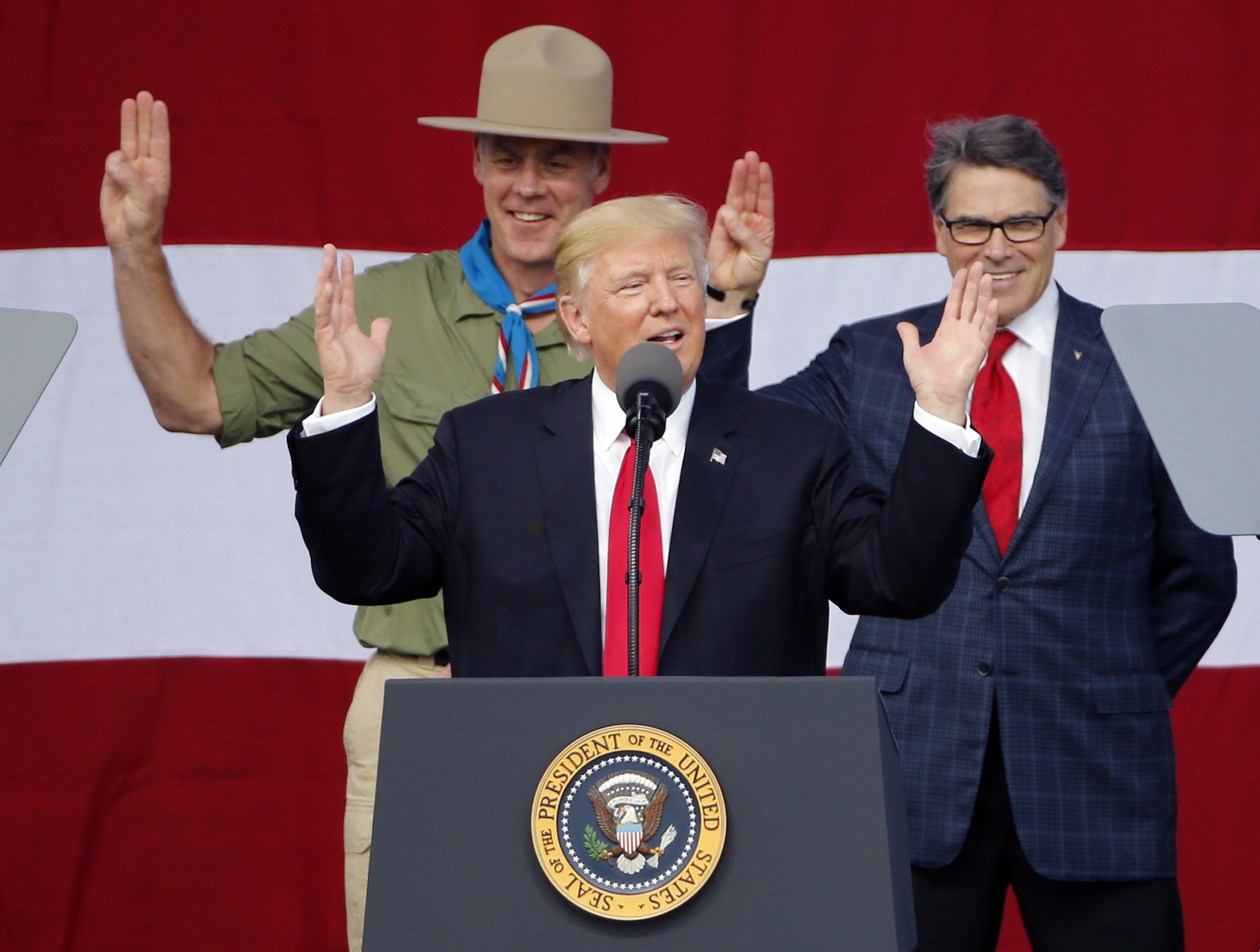 When my Eagle Scout son celebrated his wedding last year, six of his nine groomsmen were old troop buddies, as beautiful a bond as an ex-scoutmaster could tearfully celebrate. If Norman Rockwell were still alive and had attended, he might have set up an easel to capture another scene reinforcing the scouts’ image as icons of youthful patriotism and purpose.

A bond between the BSA and this EPA, however, rips apart the Scout Oath. Scouts famously pledge to be trustworthy. Wheeler last year earned “Two Pinocchios” from the Washington Post Fact Checker for defending the Trump administration’s attack on the Endangered Species Act. Wheeler claimed the legislation “hasn’t really been successful,” when in fact, the 1973 law has saved nearly 300 species from extinction.

Scouts also pledge to be thrifty, clean, and kind — which includes using natural resources “wisely,” keeping their communities clean, and never harming or killing “any living thing without good reason.” Wheeler and Trump replaced President Obama’s Clean Power Plan with one that would allow the fossil fuel industry to pump out more carbon pollution and soot into the air. Their own data said the relaxed rules could result in up to 1,400 deaths. (Obama’s EPA said its rules would prevent up to 3,600 deaths a year – so the rollback and replacement actually sacrifices as many as 5,000 people).

In the outdoors, scouts follow “leave no trace” principles to pack up and carry out trash from campsites and to not contaminate natural water sources with dishwater and human waste. Wheeler is letting industry contaminate at will. He has removed wetlands, streams, and tributaries from federal pollution protection and relaxed rules on power plant wastewater and coal ash –which is notorious for leaking carcinogenic and neurotoxic chemicals into groundwater. On Monday, Wheeler issued a final roll back of coal plant wastewater rules, risking the release of more mercury and arsenic into the environment.

Scouts will soon mull over their community project to complete the requirements for the award. Wheeler’s idea of community service was being a top aide to the Senate’s top climate denier, Jim Inhofe of Oklahoma, helping him block bipartisan climate change legislation during the George W. Bush administration. Wheeler then became a lobbyist for polluters. He shilled for mining interests, who ultimately persuaded President Trump to shrink Bears Ears National Monument by 85 percent, and he represented CEO Robert Murray of the Murray Energy coal company at a time when Murray advocated cleaving the EPA staff by at least half. Under Wheeler, EPA headcount has fallen to just over 14,000, its lowest level since the Reagan administration and down from more than 17,000 a decade ago. And Trump is proposing to slash it down to roughly 12,500.

EPA pollution enforcement is disappearing in regions where the nation needs it most, such as in the heavily industrialized Midwest. Communities who rely on that monitoring  are left imperiled: African Americans and Latinos are disproportionately exposed to the nation’s toxic pollution, making them vulnerable to worse outcomes from COVID-19.

Instead of Wheeler calling upon his scouting days to be helpful and brave for these populations, he has hailed Trump’s mission to gut the National Environmental Policy Act, or NEPA, which strips communities of having a major voice on the impact of proposed infrastructure projects on their lives.

The EPA award is not the only new honor the BSA revealed this year. Like many national organizations, it has hopped on the Black Lives Matter bandwagon with a new diversity merit badge that is required to earn Eagle Scout. That badge constitutes a necessary step forward for an organization with a checkered past. But it is two steps back for the BSA to then hop into bed with an Eagle Scout whose environmental policies scream Black Lives Do Not Matter and who works for a president who has praised white supremacists and has received praise from them.

It also is peculiar (or telling) for the BSA to align itself with the Trump administration when the president gave a disgracefully partisan speech at the 2017 National Jamboree. Trump assumed in his speech that “Scouts believe in putting America first,” telling thousands of youth under voting age that his election was “an unbelievable tribute to you and all of the other millions and millions of people that came out and voted for Make America Great Again.”

The Boy Scouts of America prides itself on being the “nation’s foremost youth program of character development and values-based leadership training.” If it really believes that, it should be empowering its scouts to challenge why our environmental protections are being degraded by one of its own.