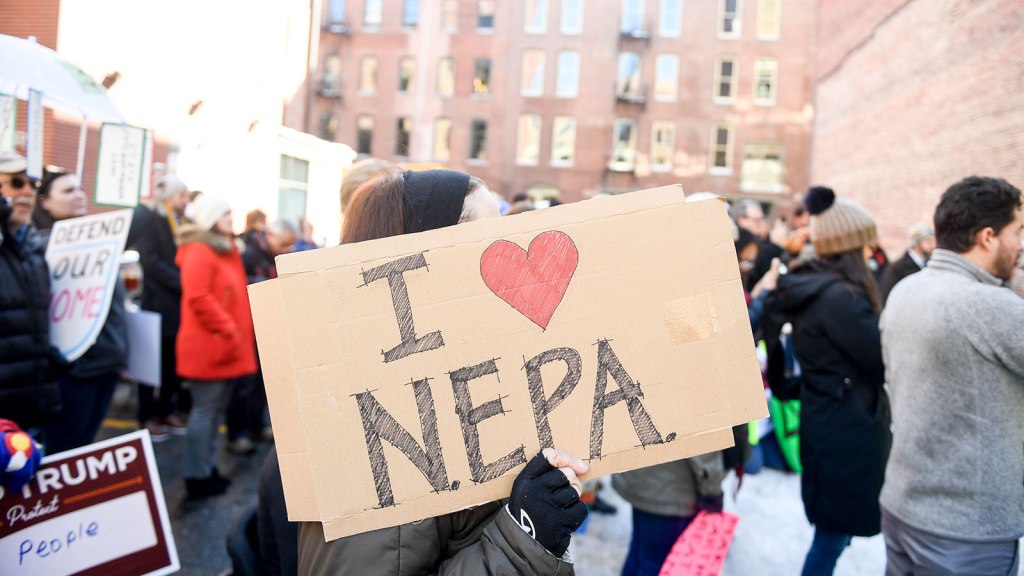 With the nation’s eyes on ongoing protests for racial justice (not to mention a seemingly endless public health crisis), last week President Trump signed an executive order that would waive key requirements of the National Environmental Policy Act (NEPA).

The landmark 1970 law requires federal agencies to consider the environmental impacts of proposed federal actions and projects, including the construction of major highways, airports, oil and gas drilling, and pipelines. Trump’s new executive order relaxes the law’s requirement that major new infrastructure and energy projects undergo environmental reviews to ensure they will not significantly harm the environment and nearby public. (Industry representatives often blame the environmental impact statements required by the law for the extensive delay of permit approvals.)

“From the beginning of my Administration, I have focused on reforming and streamlining an outdated regulatory system that has held back our economy with needless paperwork and costly delays,” Trump wrote in the executive order. “The need for continued progress in this streamlining effort is all the more acute now, due to the ongoing economic crisis.”

But the president’s desire to suppress the 50-year-old law long predates the coronavirus-fueled recession.

Early this year, the Trump administration announced plans to overhaul key elements of the law, including by limiting requests for community input prior project approval, disregarding project alternatives, and shortening the deadline for environmental impact statements and environmental assessments. Pollution-burdened communities have long leveraged NEPA as a defense mechanism to protect their health and the environment — examples include the fights against the controversial Keystone XL pipeline and the expansion of the 710 freeway in Long Beach, California.

The new order promotes a quicker permit approval process on these kinds of projects by invoking a section of federal law that allows individual government agencies to use their own emergency authorities to bypass environmental requirements. Trump’s order weakens standard environmental review requirements not just in NEPA, but also in the Endangered Species Act and Clean Water Act.

Even before Trump declared the novel coronavirus outbreak a national emergency, the White House Council on Environmental Quality held two public hearings in Denver, Colorado, and Washington, D.C., to gather feedback on Trump’s initial proposal to overhaul NEPA in ways that would speed up projects and de-emphasize environmental reviews. Students, construction workers, university professors, and grassroots activists testified before a panel of expressionless White House officials, testifying that NEPA’s requirements are vital for their safety, health, and the environment.

Anthony Victoria Midence and other environmental advocates in California’s Inland Empire, a region that experiences some of the country’s worst smog, have united environmental and labor groups to fight a controversial airport expansion that the government’s own assessment shows would add one ton of pollution to the region’s air each day. The groups invoked NEPA to mount a legal challenge to the Federal Aviation Administration’s approval of the project’s permits. Trump’s new executive order would have stymied their efforts, according to Victoria Midence, who is the community director for the Center for Community Action and Environmental Justice, a local social justice group.

“It’s clear that the Trump administration is willing to sacrifice working people of color for the benefit of industry,” he told Grist. “This latest move by Trump further demonstrates that he does not care about black and brown lives.”

The new executive order comes on the heels of the Environmental Protection Agency (EPA) finalizing a rule last week that will make it much more difficult for states, tribes, and the public to protest or block pipelines and other projects that could pollute the air and water systems. The decision, which overturns a 50-year-old understanding of the Clean Water Act, would set a strict one-year deadline for states and tribes to approve or deny proposed projects such as pipelines, dams, or fossil fuel plants.

Trump also signed another executive order last month that allows several federal agency heads to weaken regulatory requirements “that may inhibit economic recovery.” The move prompted the EPA to alert the fossil fuel industry that it could suspend enforcement of certain environmental laws, including those that require the gathering of public input on projects and the monitoring of air pollution levels.

“We need to place people over profit,” Victoria Midence told Grist. “As we suffer through this pandemic with the fear that our lungs and heart are already compromised because of diesel pollution, Trump is removing perhaps the last protections we have to raise our voices and demand environmental justice.”