After a decade of struggle, Keystone XL may be sold for scrap 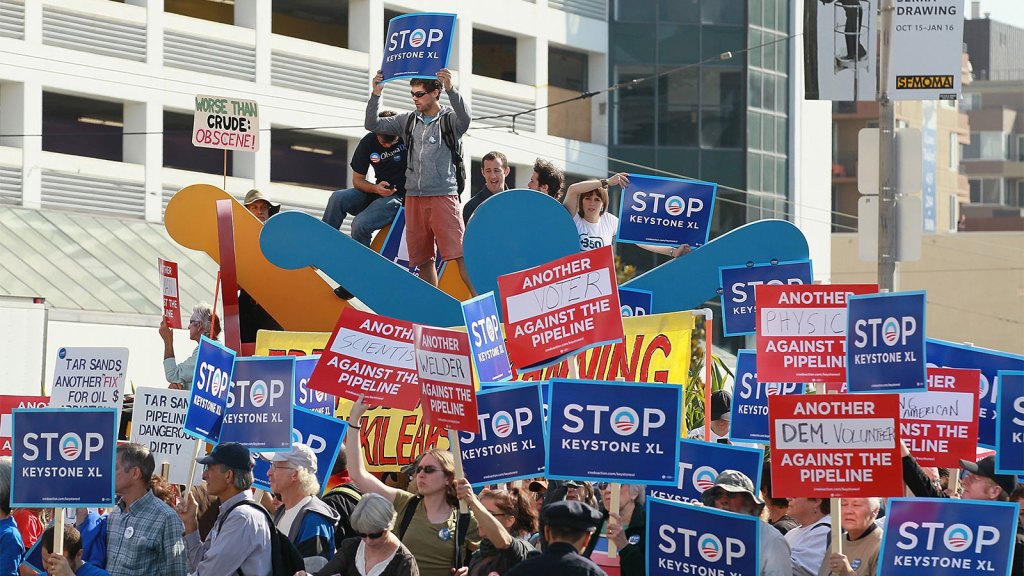 After a decade of struggle, Keystone XL may be sold for scrap

After 12 embattled years of approval, cancellation, and re-approval, Keystone XL may be done for good. President Biden rescinded the permit for the pipeline via executive order on his first day in office, delivering a long-fought victory to anti-pipeline activists.

The current Keystone pipeline carries oil from the Alberta tar sands in Canada to refineries in Louisiana and Texas. The Alberta tar sands are known for being particularly bad for the climate — emissions from oil extracted there are about 14 percent worse, on average, than a typical barrel of oil. The proposed expansion of the northern leg, which would run from Alberta to Steel City, Nebraska, would carry an estimated 830,000 barrels of crude oil a day.

It’s been a complicated decade since the Keystone XL project was first proposed in 2008 by the Canadian oil company TC Energy. President Obama approved the southern leg of the pipeline in 2012, and it was in use by 2013. But in 2015, after an outpouring of grassroots activism, Obama rejected the northern leg. That decision was reversed by President Trump during his early days in office in 2017. The following year, construction was halted when Montana’s U.S. District Judge Brian Morris ruled that the State Department needed to give further consideration to the pipeline’s potential for environmental damage. Then, last June, Trump dissolved Morris’ injunction by issuing a presidential permit, bypassing the State Department entirely. Today, the northern leg of the pipeline is mostly constructed, with some gaps remaining in Nebraska, but it’s not yet ready to pump oil.

Indigenous activists and environmentalists have been fighting the pipeline for much of its history, due to the risks of oil spills, its contribution to climate change, and infringements of treaty rights. Last Thursday, a group of Indigenous women leaders wrote a letter asking Biden to reject a set of pipeline projects, including Keystone XL, Line 3 in Minnesota, and the Dakota Access Pipeline. (Biden has not yet taken a stance on either of these other projects.) In addition to environmental risks, the letter cited the connection between pipeline construction and sexual violence. Company-owned temporary housing for laborers — “man camps” — along pipeline routes have been documented as centers of sexual assault and trafficking of Indigenous women and girls, and fossil fuel extraction and infrastructure is similarly linked to the tragic epidemic of missing and murdered Indigenous women.

Daniel T’seleie, a K’asho Got’ine Dene activist, told CBC news that he thought Biden’s decision was “largely due to the actions of Indigenous people and non-Indigenous people on the southern side of the border who have really been fighting against this pipeline … and have been making it very clear that this pipeline is not going to get built without their consent.”

Jason Kenney, the premier of Alberta, has threatened to seek legal damages over the pipeline’s cancellation — and has speculated about selling the pipeline materials to recoup investments in the project. Justin Trudeau, Canada’s prime minister, said in a press conference on Tuesday that he would keep pushing Biden for the pipeline, despite Canada’s declaration of a climate emergency in 2019.

But even if the project were to be completed, by the time Keystone XL started pumping oil it might already be obsolete. The declining price of oil makes the tar sands less and less viable — tar sands extraction is only profitable when oil prices are between $65 and $100, but oil prices are forecasted to average $53 per barrel into 2021 and 2022. These unfavorable prospects, combined with Biden’s executive order, may be enough to finally send the pipeline to the scrapyard.