An oil well right next to your house? The California Senate says that's OK. - Grist 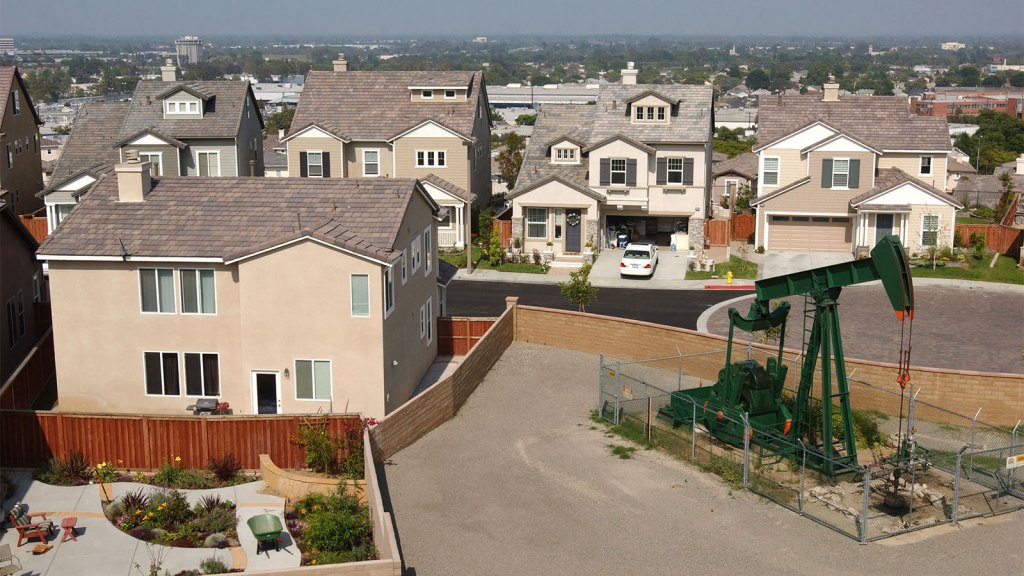 An oil well right next to your house? The California Senate says that’s OK.

A bill that would have fought pollution and environmental racism by mandating a buffer zone between California residents and oil and gas wells was voted down last week in the California Senate Committee on Natural Resources and Water. The bill, AB 345, would have required a setback between oil and gas wells and the 5.4 million Californians currently living near drilling sites. Almost 92 percent of the Californians who both live within a mile of a well and are burdened by pollution are people of color.

California is the seventh-largest oil-producing state, home to more than 100,000 oil and gas wells, many of which are located in urban areas. The history of California is deeply entwined with oil production; oil was first drilled in California in 1865, and by 1910, California was producing one-fifth of the world’s oil. Though California is better known today for tech moguls and Hollywood, oil money remains a powerful force in California politics; the Western States Petroleum Alliance is the biggest lobbying group in California by expenditures, having pumped more than $8.8 million into California elections in 2019.

The science around the long-term health impacts of living or working near oil and gas wells is still emerging, but proximity to gas wells has been linked to a range of chronic symptoms, including respiratory problems and rashes, migraines, and nosebleeds. Proximity to oil and gas wells has also been linked to higher rates of asthma attacks, cancer, general hospitalization rates, and high-risk pregnancies. A recent study from Stanford found that the risk of preterm birth, the leading cause of infant mortality, increases with proximity to oil wells, with Black and Latina women facing the highest risks.

“At this point there’s no question that living near oil and gas drilling presents an unreasonable health harm,” said Ingrid Brostrom, assistant director of Center on Race, Poverty & the Environment, an environmental justice organization. “It’s happening in areas of the state that already have the worst air quality, that are overwhelmingly communities of color, and these same communities have very little say over what is going on in their neighborhood in terms of political power. All of these things combined are leading to a real environmental injustice.”

One relatively straightforward policy response to the public health threats posed by oil and gas extraction is the institution of setbacks, mandatory distances between oil and gas wells and occupied areas like homes, schools, hospitals, and nursing homes. Despite its green reputation, California lags behind other oil-producing states on setback regulations. Louisiana, Maryland, Illinois, Colorado, Pennsylvania, Wyoming, and even Texas all have setback rules for certain occupied areas. The oil and gas industry opposes setback regulations in California, saying they would cost the state revenue and jobs. In 2018, the industry spent more than $40 million opposing a 2,500-foot setback rule that would apply to new wells in Colorado; that ballot initiative failed.

AB 345, introduced by state assemblymember Al Muratsuchi in February 2019, would have instituted a 2,500-foot setback between oil and gas wells and communities, based on recommendations made by the California Council on Science and Technology, a nonprofit policy group, in 2015. The bill was specifically designed to protect at-risk environmental justice communities and communities of color, since “we cannot fight systemic racism without environmental justice,” Assemblymember Muratsuchi told Grist. The bill was amended before it was voted on in the assembly to allow the California Geologic Energy Management Division (CalGEM) to determine the size of the statewide setback, following backlash from industry groups that said a 2,500-foot setback would curtail oil production too dramatically.

Brostrom, however, says that setback regulation wouldn’t necessarily inhibit production, because setbacks are about the location, not the amount, of oil and gas extraction. “The conversation about the need for managed decline in California is a really important discussion, and one that we need to have as a state, but the setbacks conversation is a different conversation,” Brostrom told Grist. “Setbacks are about making sure that land uses are compatible, that people are not engaging in dangerous activities next to homes.” Muratsuchi told Grist that the bill could in fact have even created more jobs as drilling sites were retrofitted to protect communities.

The amended version of the bill, which passed the California state assembly in January of this year, died in the California Senate Committee on Natural Resources and Water last week in a 4-5 vote. Three Democratic senators voted against the bill: Bob Hertzberg from the San Fernando Valley, Ben Hueso of Imperial County, and Anna Caballero of the Salinas Valley.

Two of the three Democratic senators who voted against the bill received substantial campaign finances from the oil and gas industry during the last election cycle; Hertzberg received $26,800 in contributions, and Hueso received $20,600. The offices of Hertzberg, Hueso, and Caballero did not respond to Grist’s requests for comment by the time of publication.

“We’re seeing that these senators are serving the interests of the oil and gas industry and not the public,” said Alexandra Nagy, an organizer with Food and Water Watch, an environmental nonprofit that supported the bill. “It’s so pervasive because oil and gas has been one of the biggest industries in California for a really long time … With that comes powerful interests and powerful spending.”

Following the vote, the bill is dead for this legislative session. California Governor Gavin Newsom, however, has the executive power to institute setbacks through CalGEM. “The ball is now in the Governor’s court as to whether they step up to protect these environmental justice communities,” said Muratsuchi. “We talk a lot about how science should prevail over politics. In this case, the science is clear, but the politics prevailed.”

The bill’s failure is a particular blow because the health impacts associated with oil and gas wells, in particular the increased risk of asthma, also put communities at a higher risk from COVID-19. The pollutants produced by oil and gas drilling, particularly fine particulate matter, have also been found to make the virus even deadlier. This acts as a multiplier effect for a disease that already disproportionately affects Black and Latino populations.

“In Los Angeles, you have a toxic soup of freeways, industrial production, and oil drilling, that are all leading to a cumulative impact that is making communities that are more polluted also more vulnerable to COVID,” Martha Dina Argüello, the executive director of Physicians for Social Responsibility–Los Angeles, told Grist. “What we can do from a policy perspective with the setbacks is to reduce that cumulative burden.”

For Brostrom, the failure of the Senate to pass AB 345 shows that California is not living up to its green reputation. “California often touts itself as being an environmental leader, and yet if you look at our policies that’s simply not true,” said Brostrom. “We are not the environmental and climate justice leaders that we make ourselves out to be.”