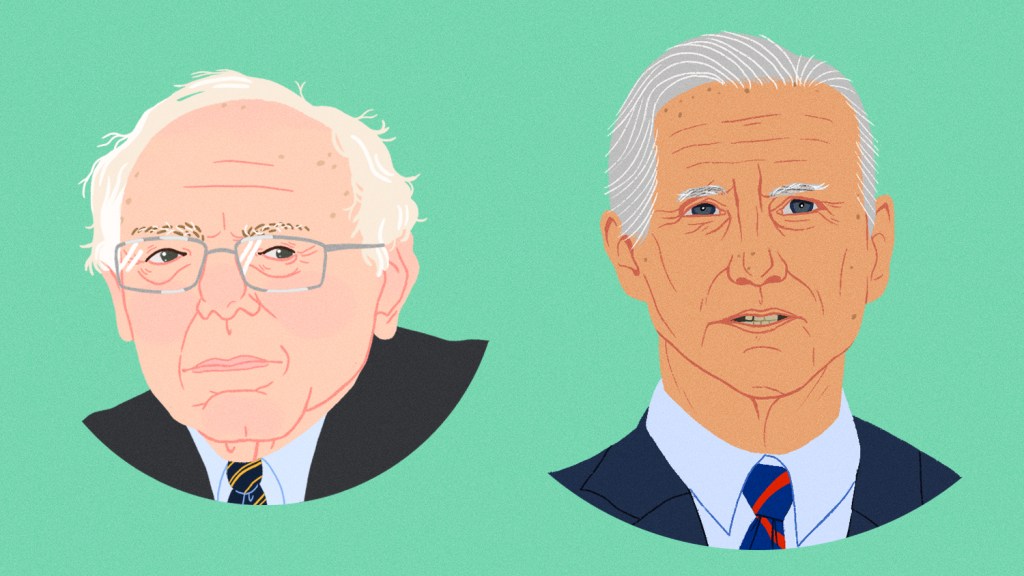 Over the last nine months, despite more than one Democratic primary debate where moderators didn’t ask even a single climate question, climate change has gotten more screen time than in any previous election. That’s thanks, in part, to seven hours of one-on-one interviews with the candidates about the subject during CNN’s Climate Crisis Town Hall in September.

But the debates also offered voters who are concerned about climate change, which according to polls is most Democratic voters, a chance to gauge where the issue ranks among the candidates’ priorities and how they will confront its complexities. Now that only two candidates remain for the 11th and possibly final debate on Sunday night — Senator Bernie Sanders and former Vice President Joe Biden — I went back to the transcripts, pulled out every response they gave to questions about climate change in previous debates, and fed them into a text analyzer to find their most commonly used phrases.

I found that those rehearsed, tired lines say a lot about each candidate’s values and why they think they are the one to trust when it comes to solving the crisis of our time.

Twice during the CNN town hall, and in two debates, Biden brought up his 1986 Global Climate Protection Act, the first climate change bill ever introduced in the Senate, and each time he noted that “PolitiFact said it was a game changer.” Biden has used this anecdote to argue that he’s been in the game, fighting the good fight for the climate, longer than any of his competitors. But while it’s true that he was the first legislator to get climate legislation passed —President Ronald Reagan signed it into law as an amendment in 1987 — the bill ultimately didn’t do much. And the fact-checking website PolitiFact did not, in fact, call Biden’s act a “game changer.”

“It was a plan to make a plan. Which, of course, neither Reagan nor Bush ultimately did,” Josh Howe, a professor of history and environmental studies at Reed College, told PolitiFact.

Biden has often followed up statements about the 1986 bill by talking about his work managing the 2009 Recovery Act, a $90 billion investment in clean energy and energy efficiency, during the Obama administration. His repeated use of these two examples are illustrative of Biden’s emphasis on his experience and name recognition rather than his plans for the future. During the seventh debate in Iowa, Biden cited these examples in response to a question about whether he would ban fracking and managed to avoid addressing the controversial issue entirely.

If I’ve learned anything about Biden in watching these debates, it’s that the man loves charging stations. In four debates, and twice during his CNN town hall interview, Biden talked about “owning” the electric vehicle market and installing 500,000 new charging stations across the country. Despite his known enthusiasm for trains, “Amtrak Joe” talked about electric vehicles and repairing roads and highways far more often than he talked about investing in high-speed rail, which he only mentioned once during the debates.

Overall, Biden has focused on market-based, demand-side solutions to reduce emissions and barely touched on phasing out fossil fuels. He’s often paired his statement about charging stations with a nod to his plan’s $400 billion research and development investment. These talking points align with one of the primary ways Biden’s climate plan differs from Sanders’: Biden puts much more faith in technology. While Sanders is opposed to building new nuclear plants and funding carbon capture and sequestration tech, Biden’s plan invests in both. But in taking this approach, he’s been criticized by other candidates, like Jay Inslee, for ignoring the heart of the issue.

“Your plan is just too late. The science tells us we have to get off coal in 10 years. Your plan does not do that,” Inslee told Biden at the second debate.

In an effort to inspire optimism, Biden has sometimes chastised Americans for “walking around with our heads down like ‘woe is me’” and being defeatist about climate change. “This is the United States of America. There is not a damn thing we’ve not been able to accomplish once we set our mind to it,” he said at CNN’s Town Hall.

Biden’s “we can accomplish anything” message (sometimes delivered with a caveat, “once we get rid of Trump”) lines up with his overall strategy of putting faith in American ingenuity and banking on his record. In several debates he mentioned his role in helping to negotiate the 2016 Paris Agreement. The agreement’s ultimate passage was decades in the making and extraordinarily difficult, and it certainly required a lot of people “setting their minds to it.” While Biden’s version of the story doesn’t entirely hold up, he does have a grip on the challenge of international cooperation. He has repeatedly stressed that the United States is responsible for only 15 percent of global emissions and argued that he is uniquely equipped to “corral” other global leaders to act.

“They know me. I’m used to dealing with international relations. I will get them to up the ante in a big way,” Biden said recently at the debate in Nevada. (Critics have said that Biden’s focus on the U.S.’ small comparative footprint sound like reasons to delay taking action now.)

The “we can do anything” slogan has also made Biden vulnerable to criticism from supporters of Sanders’ $16 trillion climate plan — if we can do anything, why not take dramatic action to reduce emissions now?

A key tenet of Sanders’ climate plan is to take on the fossil fuel industry. He takes it as given that fossil fuel companies knowingly got us into this mess, whereas for Biden, the jury is still out. When Biden was asked directly what he would do to hold fossil fuel companies responsible during the ninth debate, he hedged his answer, saying “If you demonstrate that they, in fact, have done things already that are bad and they’ve been lying, they should be able to be sued.”

Since Sanders’ plan hinges on big, politically difficult changes like banning fracking, his debate strategy is often to appeal to voters’ morality. He connected oil companies’ “greed” for “short-term profits” to the wildfires consuming Australia and California, the drought in Iowa, and the inevitable conflict that will arise as hundreds of millions of people are displaced due to climate change. The line has often been paired with another Sanders favorite: that if we don’t get our act together, “the planet that we’re going to be leaving our kids and our grandchildren will be increasingly unlivable and uninhabitable.” Sanders has frequently justified his aggressive plans with concern for future generations.

Sanders has brought climate science into almost every debate, reminding voters that “scientists are telling us” that we have about a decade to act before “irreparable damage” is done to the planet. He’s stressed the urgency of the issue, again, by citing the stakes: floods, fires, droughts, global disruptions. The scientists Sanders was referring to in these moments are the U.N.’s International Panel on Climate Change, whose recommendations for keeping the global average temperature from warming 1.5 degrees C (2.7 degrees F) inform the emissions targets in Sanders’ plan.

Both candidates envision a decarbonized energy system by 2050, but Sanders aspires to move more quickly, setting a 2030 deadline to transition the electricity and transportation sectors to run entirely on renewable energy, while Biden’s plan mentions setting interim targets that are TBD. And while Sanders plans to transition the entire energy system off of fossil fuels, Biden’s plan leaves things more open-ended, with the idea that investing in research and development will open new pathways to offsetting remaining emissions.

Last month, Biden told voters in New Hampshire that “not a single scientist” thinks Sanders’ climate plan will work. The next day, more than 100 scientists penned a letter supporting Sanders’ plan. But Sanders’ fast-moving climate plan has drawn criticism from some energy experts for being unrealistic and not demonstrating a nuanced understanding of the political system.

Everything Sanders has said about climate change seems to be filtered through three positions the senator holds: that the lies and corruption of fossil fuel companies are what got us into this mess; that plans to address it have to be based on science; and that climate change touches every other major issue. Twice, he has interrupted moderators who told him to stick to the question at hand to remind them that climate change was, in fact, connected to discussions of trade, for example, and inequality.

He’s deployed the “common enemy” line in a similar fashion. In response to questions about diplomacy, the scale of the challenges ahead of us, and the difficult choices a future president will have to make, Sanders has often cited the extraordinary amount of money currently spent on defense and implied that climate change is our only real enemy. “Instead of spending $1.8 trillion dollars a year collectively on weapons of destruction designed to kill each other,” he’d say, “maybe we pool our resources and fight our common enemy, which is climate change.”

Some find fault with Sanders’ pacifist attitude. During the 10th debate, Pete Buttigieg accused him of being nostalgic for the 1960s. It’s easy to see why. As beautiful of an idea as this line is, does Sanders really have this much faith in humanity to believe that climate change can bring the world together, rather than exacerbate existing divisions?

That idealism, which is easy to denigrate as naivete, may be Sanders’ biggest weakness heading into Sunday’s debate. Meanwhile, Biden’s biggest weakness is a different kind of idealism — the hope that technology and market-based solutions, without rapid changes to the fossil fuel industry, will be enough to confront the scale of the climate crisis. (Both candidates have called it an “existential crisis.”) In a speech Sanders gave on Wednesday about his decision to stay in the race, he said he plans to confront Biden about his energy and climate plans at Sunday’s debate and specifically press him on developing science-based targets. With no one else on stage to interrupt them, will the candidates dare push past their tried-and-true talking points and get more specific about what, exactly, they want to do to prevent catastrophic climate change, and how they plan to do it? We’ll have to tune in to find out.