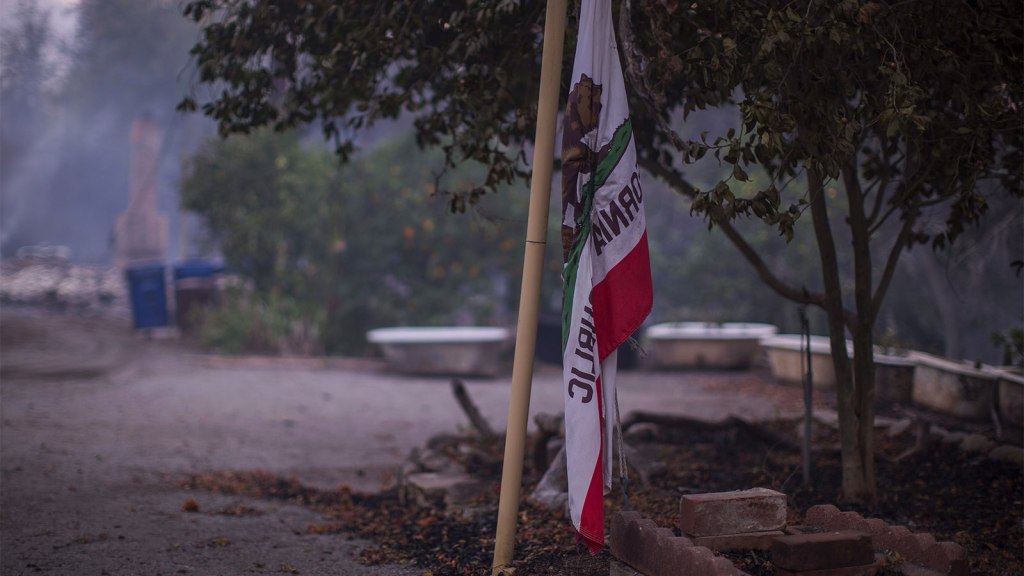 The smoking remnants of a farm damaged by the Thomas Fire on December 10, 2017 near Carpinteria, California. David McNew / Getty Images
rising tides

After years of scorching summers, storms of fire and ash, floods, and drought, Californians now rank climate change as their No. 1 political priority, according to a new poll of Democratic primary voters.

Nearly half, 47 percent, of those polled, said that climate change was the most important crisis for the next president to address (assuming there’s a next president, tra la!). That’s higher than the other issues pollsters asked about: immigration reform, criminal justice, and health care.

In the past, Californians regularly said that health care was the most important issue to them, said Mark DiCamillo, director of the poll conducted by the Institute of Governmental Studies at the University of California, Berkeley. “This time, it didn’t, and I think that’s news.”

The findings reflect increasing concerns about global warming across the country. A poll out Monday from the Washington Post and the Kaiser Family Foundation says 38 percent of Americans consider it a “crisis,” a leap from 23 percent five years ago.

It’s getting easier to find polls with that show more people care about climate change, but extremely rare to find that people rate it as their top priority.

California has always been a special case when it comes to environmental issues. DiCamillo said that might be because the natural beauty of the state inclines people to shelter it from climate change. “There’s just so much climate in California to protect,” he said.

You can see a clear trend of increasing concern in another poll, the Public Policy Institute of California’s Statewide Survey. The most recent survey showed a record-high share of Californians — 71 percent — were “very concerned” about global warming making wildfires worse.

“We began to see this shift during the drought,” said Mark Baldessare, the institute’s president, “and more recently with the annual season of wildfires, which have been expanding in scope and damages. Californians say climate change is contributing to these things. It’s not abstract: It’s real, and they are experiencing it.”

Though this poll only surveyed likely voters in California’s Democratic primary, it included conservatives. California’s primaries are open, which means anyone who doesn’t state a party preference can vote in them. And even among those who identified themselves as moderates and conservatives, 37 percent said that climate change should be presidential candidates’ primary focus, a larger percentage than any other issue.

This preference was remarkably consistent across groups: Men and women, young and old, PhDs and college dropouts all had pluralities placing climate change first. Black voters and Joe Biden supporters were the exceptions, choosing health care instead.

Currently, it’s a tight race between Biden, Elizabeth Warren, and Bernie Sanders in the state.