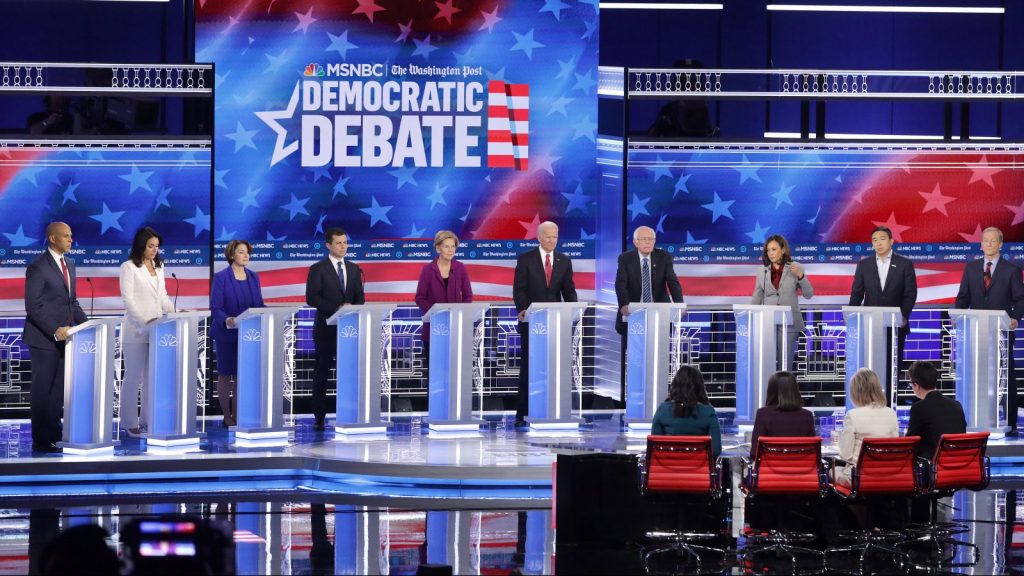 Those hoping for a debate heavy on what Bernie Sanders called early in the evening “the existential threat of our time” were surely disappointed. Climate change was awarded a single question, though candidates found chances to bring it up throughout.

Moderators from MSNBC and the Washington Post opened the night with a question about impeachment. Healthcare and the economy also dominated the conversation (no surprise there). About halfway through the night, MSNBC’s Rachel Maddow asked the debate’s only question about rising temperatures. Many viewers care deeply about climate change, she said, then Maddow offered up a question from a viewer in Minnesota: What do candidates plan to do about it, and how do they aim to drum up bipartisan support for their plan?

The question went to a frontrunner, naturally. Just kidding. Representative Tulsi Gabbard from Hawaii got first dibs. Gabbard said she aims to prioritize climate action if elected, a promise that would be easier to take at face value if she wasn’t the only candidate on stage who hasn’t unveiled a comprehensive plan to combat rising emissions. To be fair, Tulsi introduced the OFF act, a bill to wean the United States off fossil fuels, in Congress last year. Tom Steyer, the billionaire who runs a progressive advocacy group called NextGen America, got a chance to take a stab at the climate issue next and made a more passionate case for action.

“Congress has never passed an important climate bill ever. That’s why I’m saying it’s priority one,” Steyer said (an echo of Governor Jay Inslee’s line: “If it’s not number one it won’t get done.”) Steyer was the only candidate on stage who said he aims to declare a national emergency over climate change as president.

Later, Sanders talked about climate change refugees, something he said will become a major security issue in the coming year. He promised to go after oil and gas companies, an industry he said could be criminally liable for knowingly misleading the public about the effects of burning fossil fuels. “They have lied and lied and lied,” Sanders said. He also took issue with the idea that the effects — drought, floods, and extreme weather — are decades away. “If we don’t get our act together in eight or nine years,” he said, major cities will be underwater all over the world.

Even though moderators asked only one question about rising temperatures, several candidates were able to weave the topic into responses to other questions. Andrew Yang and Steyer shared a moment of camaraderie when Yang gave Steyer props for using his money to tackle the climate crisis. “You can’t knock someone for having money and spending it in the right way,” Yang said.

Pete Buttigieg talked about a farmer in Boone, Iowa, who told him farmers would rather be focusing on conservation over trade wars. “American farmers should be one of the key pillars of the solution to climate change,” he said. Elizabeth Warren plugged her proposal to employ 10,000 young Americans and veterans in public parks and climate resiliency projects. Toward the beginning of the debate, Steyer incorporated the need for sustainability in urban planning and development.

Climate change has been the topic of less than 10 percent of the questions asked at each of the previous four debates, and this debate was no different. But the fifth debate did demonstrate once again that candidates are ready to talk climate, even if moderators aren’t.