Climate was public enemy No. 2 -- after Mike Bloomberg -- at Nevada's Democratic debate 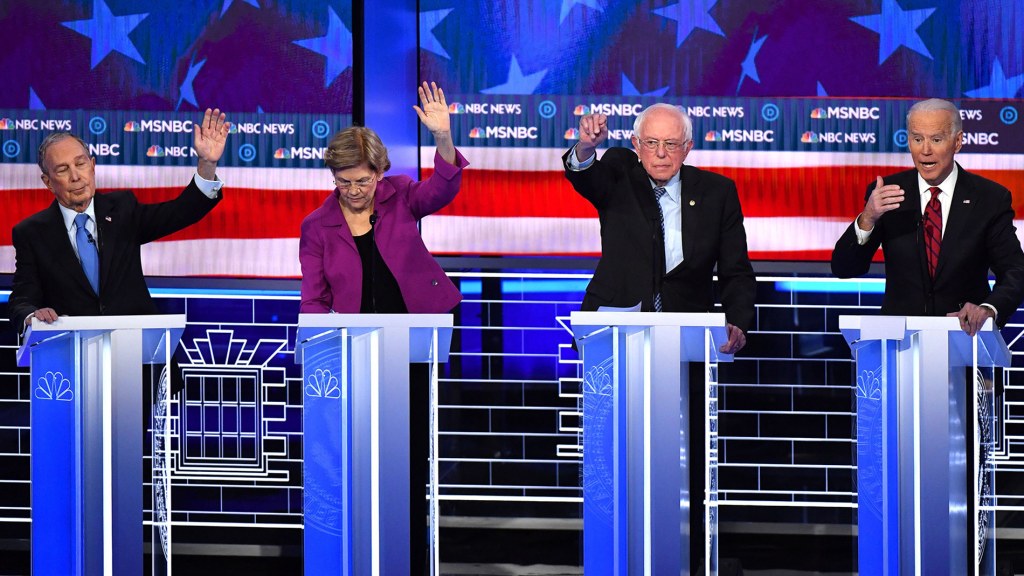 Climate was public enemy No. 2 — after Mike Bloomberg — at Nevada’s Democratic debate

If you’re reading this, congratulations! You’ve made it to the ninth — yes, the NINTH — Democratic primary debate. With each new debate, a shrinking cohort of presidential contenders have had the opportunity to make their climate pitch before millions of Americans, moderators’ questions permitting. The candidates have grown increasingly adept at weaving issues like rising temperatures and environmental injustice into their answers to questions about trade, military spending, race, and war — topics that most politicians didn’t consider climate-adjacent just four short years ago.

Still, climate change racked up just a handful of minutes at previous debates, despite the fact that polls have shown it’s a top priority for voters. In Nevada, where Wednesday’s debate took place, recent polling shows climate change is a defining issue for likely Democratic caucusgoers, particularly Latinos.

Wednesday’s debate was different from the eight that came before it in one major way: It was the first debate in American history moderated by a climate journalist. Vanessa Huac, a climate correspondent for the American Spanish-language television network Telemundo, was one of five moderators grilling candidates. Huac heads up Telemundo’s environmental investigative unit and has been covering climate and environmental issues for more than 20 years. In an interview with NPR’s The World on Tuesday, she said MSNBC tapped her for the debate specifically because “climate change is going to be a key and a decisive issue for many voters.”

Does that mean climate change was finally a key and decisive issue on the debate stage? You bet. And Huac wasn’t the only one asking tough climate questions.

For 16 minutes, the candidates took a break from piling on newcomer candidate and former New York City Mayor Michael Bloomberg to talk climate policy. The discussion was sparked by a question from moderator Jon Ralston, founder of the Nevada Independent, who asked about the threat that extreme heat poses to the livelihood of the state. “What specific policies would you implement that would keep Las Vegas and Reno livable?” he asked Joe Biden, who used his moment in the spotlight to plug high-speed rail — an arena in which the U.S. is far behind other countries.

“I would invest in rail, rail, rail,” the former vice president said. “Rail can take hundreds of thousands, millions of cars off the road.” But while Biden spoke in optimistic platitudes in response to this first question, he was forced to get specific a few minutes later, when Huac asked whether he’d hold oil and gas executives accountable for exacerbating the climate crisis.

“If you demonstrate that they, in fact, have done things already that are bad and they’ve been lying, they should be able to be sued,” he said, referring to the CEOs of oil and gas companies. “They should be able to be held personally accountable.” It looks like Senator Elizabeth Warren’s repeated promises to take on corporate accountability might have rubbed off on the former vice president.

Bloomberg, who has made fighting climate change a key component of his philanthropy, touted his “Beyond Coal” partnership with the Sierra Club to shutter coal plants across the nation. “We’ve closed 304 out of the 530 coal-fired power plants in the United States,” he said.

But he didn’t seem as keen to shutter natural gas plants. After Senator Amy Klobuchar doubled down on her assertion that natural gas is a “transitional fuel,” Bloomberg agreed. (Natural gas emits less carbon than oil — but more methane, a powerful greenhouse gas.) “We’re not going to get rid of fracking,” Bloomberg said. That set him apart from Senators Bernie Sanders and Elizabeth Warren, who have said they’d ban fracking.

The candidates also differed on how to rein in China’s greenhouse gas emissions. Bloomberg said “going to war” with China over its emissions wasn’t the right call. Instead, he suggested convincing China’s leaders that bringing down emissions is in their own best interest. “Their people are going to die just as our people are going to die,” he said. Former South Bend, Indiana, Mayor Pete Buttigieg disagreed with that approach, arguing that “America has repeatedly overestimated our ability to shape Chinese ambitions.”

One thing the Democrats on stage seemed to agree on was that climate change is an existential threat that needs to be addressed immediately, not decades in the future. “Let’s be real about the deadline: It’s not 2050. It’s not 2040. It’s not 2030,” Buttigieg said. “It’s 2020.”