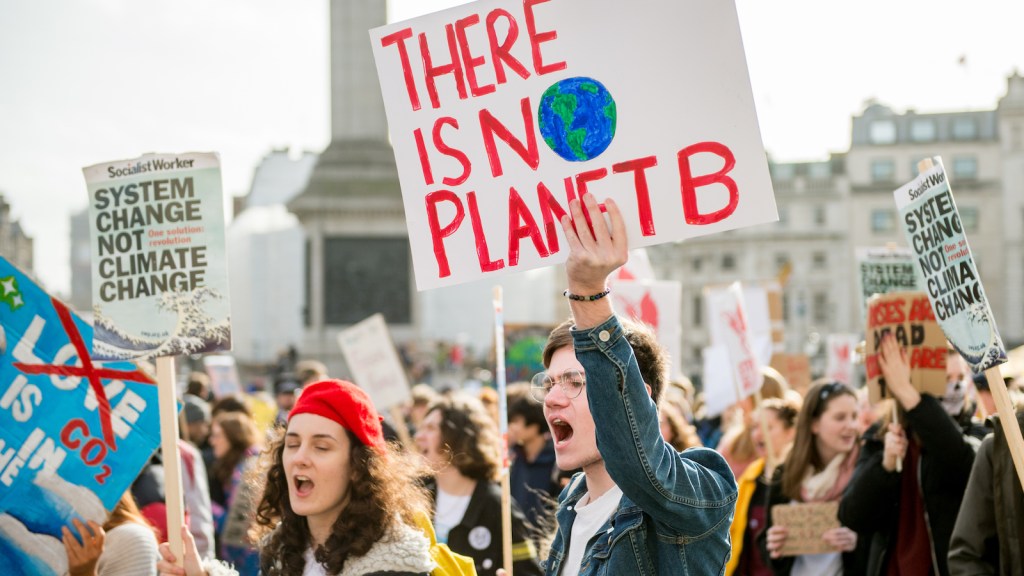 For young climate activists in the United States, staying home because of the pandemic does not mean staying silent, with plans gathering pace across the country to make their voices heard in November’s elections.

It has been nearly a year since an estimated 6 million people across the world joined the youth-led global climate strikes on September 20.

In the United States, students from Los Angeles to Washington, D.C., skipped school to voice their frustration over the slow response to the climate crisis by elected leaders, and Greta Thunberg told a cheering crowd in New York City “this is only the beginning.”

But in the 10 months since the historic protests, the COVID-19 pandemic has ravaged the United States, making meeting and organizing in person hazardous. Climate strikes, including a major three-day mass protest that was planned for Earth Day 2020 in April, have been canceled.

But networks of youth climate activists have been regrouping, with a new focus on election campaigning with phone banks, social media, and friend-to-friend organizing, according to interviews with organizers.

The stakes could not be higher for young people, according to 23-year-old Aracely Jimenez-Hudis, the deputy communications director of the Sunrise Movement, a leading youth advocacy group on the climate.

“We are a generation that was really born into crises,” said Jimenez-Hudis. “We don’t have some golden age that we can look back on and feel that there is any kind of resonance with a call to normalcy because our normal has always been endless wars, has always been police brutality.”

Youth voter turnout during the 2016 elections was disappointing, with just 46 percent of eligible voters aged 18 to 29 going out to vote, compared to 70 percent of the oldest voters, 70 and over.

Then in the wake of Donald Trump’s election, youth movements began building campaigns and gaining visibility, with climate change growing as a key issue, driven in part by the burgeoning Sunrise Movement, which was founded in 2017.

In preparation for the 2018 midterm elections, the Sunrise Movement began training young activists to canvass for candidates who were proponents of renewable energy and publicly confront incumbents who take money from the fossil fuel industry. When the 2018 midterms came around, 20 percent more young Americans ages 18 to 29 went out to vote compared to the last midterms in 2014, and Democrats won the House.

The group has more recently been pushing Democratic leaders to embrace the Green New Deal, a bold carbon-neutral plan for the economy championed by progressive Democrats including Alexandria Ocasio-Cortez.

Backing the policy was initially seen as too radical by many Democrats, but it has now been embraced more widely by members of the party. Joe Biden, the presumptive Democratic presidential nominee, recently unveiled a climate and jobs plan that mirrors some of the aggressiveness of the Green New Deal, though some activists believe he is not tough enough on fossil fuel industries.

With the pandemic, Jimenez-Hudis said, the Sunrise Movement has shifted its electoral strategy to focus entirely on phone banking and friend-to-friend organizing — encouraging people to talk to their friends and relatives directly about the candidates they support.

“We still have lots of work to do to make sure that we get the right Democrats on the ballot, the right Green New Deal champions on the ballot for the election in November just up and down the ticket,” Jimenez-Hudis said.

The organization credits its phone banking volunteers for helping Jamaal Bowman, a former teacher who ousted a longtime congressman in New York, win his election and for tightening the race of Charles Booker, a Democrat in Kentucky who was hoping to run against the Republican senator Mitch McConnell.

In the wake of the police killing of George Floyd in May, the Sunrise Movement has also made efforts to streamline its focus toward racism and police brutality, encouraging members to attend protests and speak out about the intersection of racial justice and climate activism. The organization recently started its #WideAwake campaign, encouraging local activists to protest outside the homes of elected officials. On Juneteenth, a local Sunrise chapter coordinated such a protest outside the home of Senator McConnell, demanding justice for Breonna Taylor, who was shot and killed in her home by police in Louisville, Kentucky.

Recent months have helped some young climate activists see that the same systemic changes needed to address climate change are in line with the ones that will bring racial justice, escalating the need for elected officials who will bring those changes.

Rose Strauss, a 20-year-old former organizer with the Sunrise Movement, said her time with the organization helped her understand the gravity of the 2020 election. She dropped out of college so she could dedicate all her time to the election and canvass for Senator Bernie Sanders in New Hampshire.

Once it became clear that Sanders was not going to win the nomination, Strauss and a few fellow activists began to dedicate their efforts to starting a new initiative called the Down Ballot Disruption Project. The program, held entirely over Zoom, aims to teach young people how to canvass for candidates in their local elections and how to build a community around their activism, especially on social media.

Young people can “change this election in massive ways. The only arena right now, because we can’t go and canvass outside, is social media. That’s where we know how to do stuff,” Strauss said. “We really need to make sure that the politicians who get elected this cycle are going to be the ones that are really caring about our futures.”

For activists with Zero Hour, the climate justice organization that coordinated a youth climate march in Washington, D.C., in summer 2018, the focus for the 2020 election is less on getting individual candidates elected but broadly teaching young activists how to encourage their communities to get out to vote and educate them about the Green New Deal.

The organization, along with the National Children’s Campaign, launched the #Vote4OurFuture campaign in July, targeting youth activists in Philadelphia and Pittsburgh in Pennsylvania and Grand Rapids and Detroit in Michigan, two swing states. The campaign was originally scheduled to be a bus tour in March, but coronavirus forced the organizations to change course. Now, the campaign is all about hosting virtual events like roundtables and webinars focusing on what the Green New Deal could look like in specific communities.

“We want climate change to be a top priority on people’s minds when they’re going to the polls in November because of the way it will impact people of color and people living in those cities,” said Zanagee Artis, the 20-year-old co-founder and deputy director of digital advocacy for Zero Hour.

While climate advocacy during the pandemic has largely been on video chats and social media, young activists are eager to get back on the streets. Fridays for Future, the global organization founded by Greta Thunberg, plans on holding a global climate strike on September 25. Local chapters are working on what the protest will look like in their areas to accommodate local COVID-19 conditions.

Spencer Berg, a 17-year-old organizer with Fridays for Future NYC, said organizers are still working out the logistics of what the protest will look like, but the overall message of the demonstration will be to advocate for a “green recovery” and ensure that New York City continues to uphold its commitments to fighting climate change.

While the pandemic has left devastation across the city and in many other places in the United States, activists are hopeful that coronavirus can provide parallels to climate change and show how a single crisis can affect everyone.

Coronavirus has “inspired a lot of people because it has shown us that the government can act quickly and efficiently to quell a crisis,” Berg said. “That’s what this is: It’s a climate crisis. A lot of politicians say we can’t afford to do that, we don’t have enough time for this, but coronavirus showed us that we can have complete systematic change if we need to.”