Whether you’ve been frantically refreshing the New York Times’ election results page since Tuesday or mainlining cable news coverage for two days straight, the red-and-blue presidential electoral map has been a source of high anxiety for many of us.

As we wait for all the votes to be counted, you can take your mind off things by checking out these alternative, more comforting maps of the United States. Courtesy of the Yale Program on Climate Change Communication (YPCCC), they highlight some positive trends in public opinion on global warming. We may be a politically divided nation, but a growing majority accepts that climate change is here, it’s human-caused, and it’s bad. Even some aggressive policy approaches are more widely supported than you might think.

It doesn’t matter how many times you check the news — the vote count will take as long as it takes. So stop refreshing the electoral map and refresh your mind with some happy climate-related data:

Despite President Trump’s high-profile climate denial, a whopping 72 percent of Americans accept that global warming is happening. Even in denialist strongholds like West Virginia, where governor Jim Justice is a former coal mogul and has denounced initiatives to fight climate change, nearly three-fifths of the state’s residents accept the unequivocal scientific consensus. In Democratic hotspots like Washington, D.C., that number climbs as high as 83 percent. 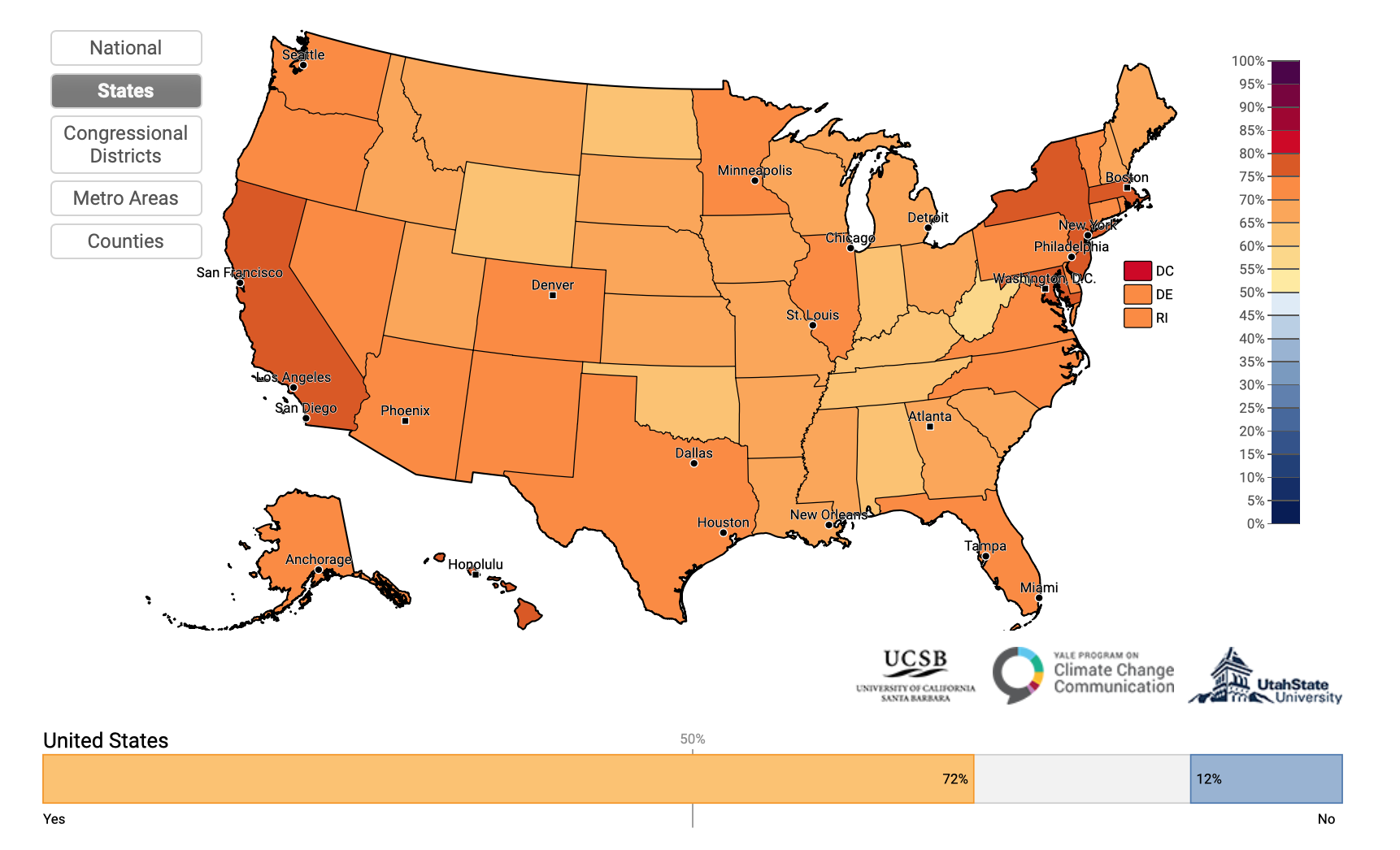 The map is more disappointing when you consider whether people believe climate change is human-caused (only 57 percent say yes), but for now we’ll take what we can get.

We should do something about climate change

Americans who are alarmed about the climate crisis outnumber deniers by a wider margin than ever before, and YPCCC data shows that the general population wants the country to take action. According to the program’s surveys, American adults are surprisingly united in their desire for a range of climate regulations and policies.

Perhaps unsurprisingly, Americans overwhelmingly support government subsidies for energy-efficient cars and solar panels. In 2020, an incredible 82 percent of the country’s adults voiced support for these climate-related tax rebates — and in no state did public support fall below 78 percent. It makes for a very uplifting map: 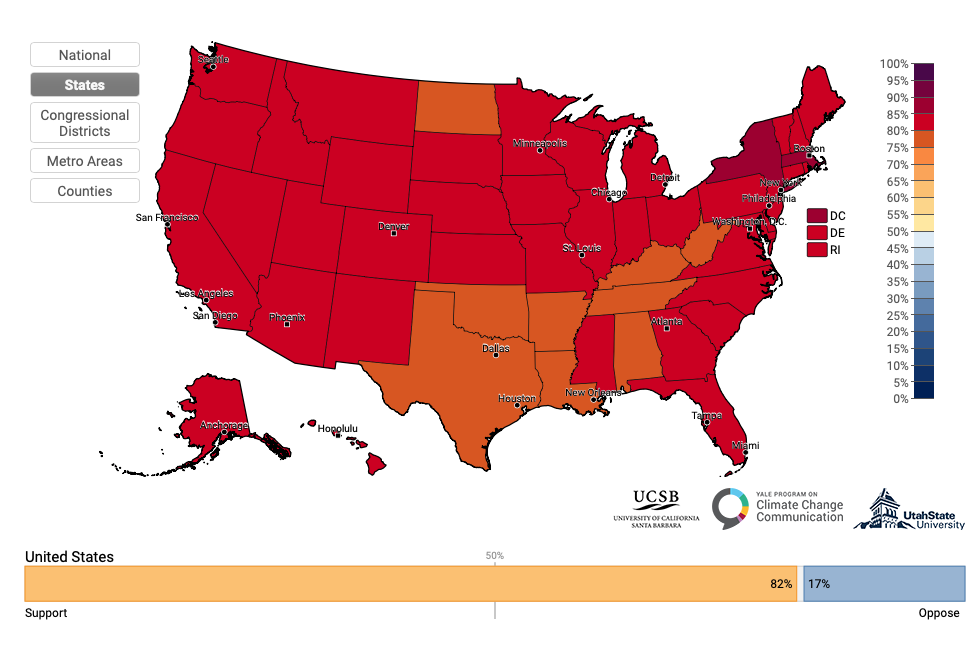 Another happy finding of the YPCC: Americans aren’t averse to regulating coal and other fossil fuel companies for their outsize contribution to the climate crisis. (Just 20 fossil fuel companies are responsible for more than one-third of all the world’s greenhouse gas emissions.) Sixty-eight percent of adults support levying a carbon tax on fossil fuel companies while equally reducing other taxes, and the same fraction wants to impose strict CO2 limits on existing coal-fired power plants. 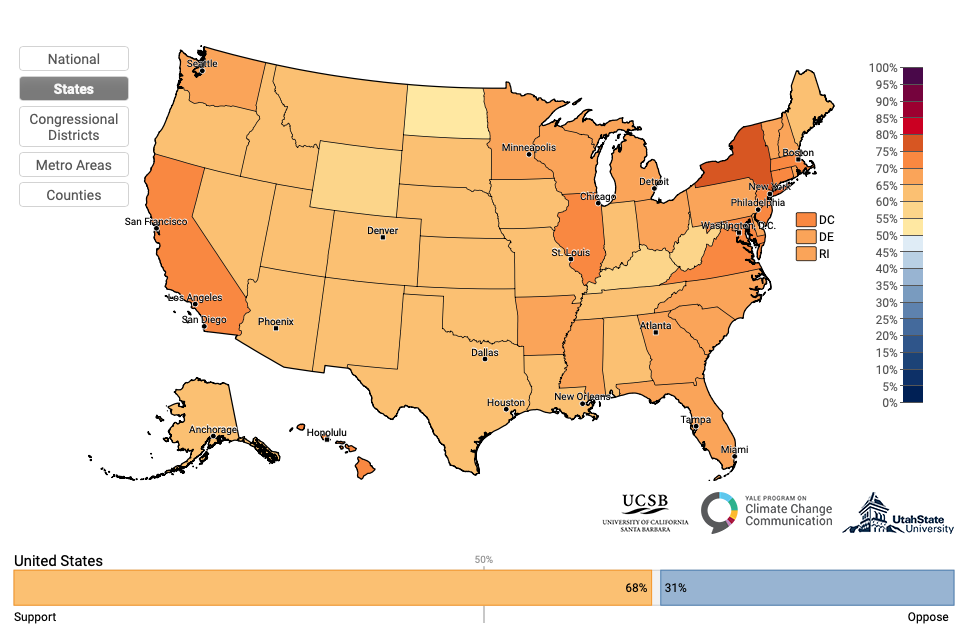 Also, let’s not make it worse

Just as Americans are united behind climate action, they also agree there are some things we definitely should not do to exacerbate global warming. Even though the Trump administration in April moved ahead with plans to open up the Arctic National Wildlife Refuge’s 19 million acres to oil drilling, more than two-thirds (68 percent) of Americans oppose those plans. 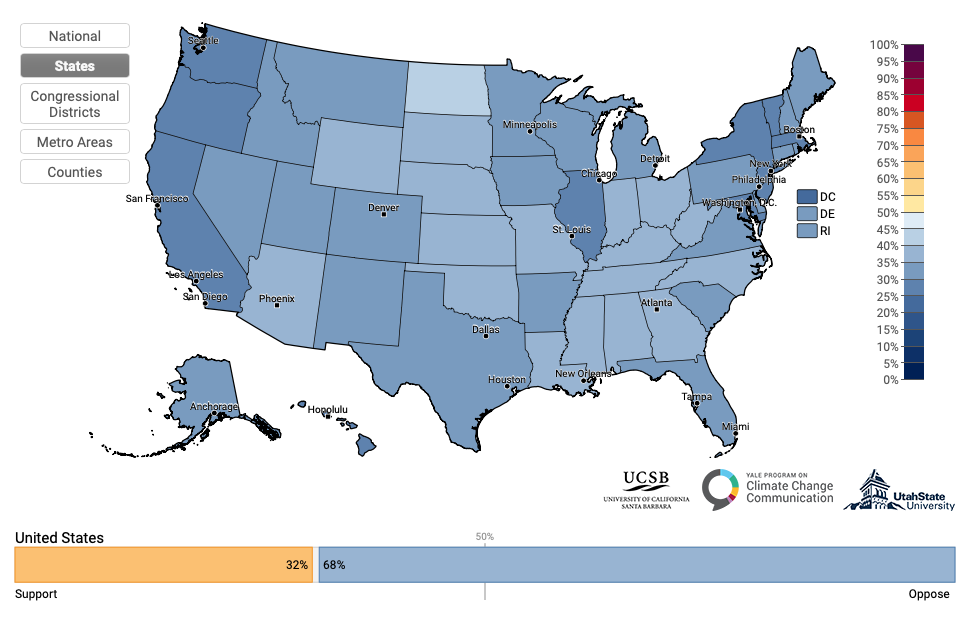 More Americans need to be convinced that offshore drilling is a bad idea (just 47 percent oppose it).

The federal government and corporations should address global warming

Most people surveyed supported climate action across the board — including from local officials and state governors. But an especially strong majority of adults said they specifically wanted Congress (60 percent), corporations (70 percent), and — notably — the president (60 percent) to do more to address climate change.

Depending on what happens with that other map — the electoral one — maybe come January 20, 2021, the 60 percent of Americans in that last category will get their wish. 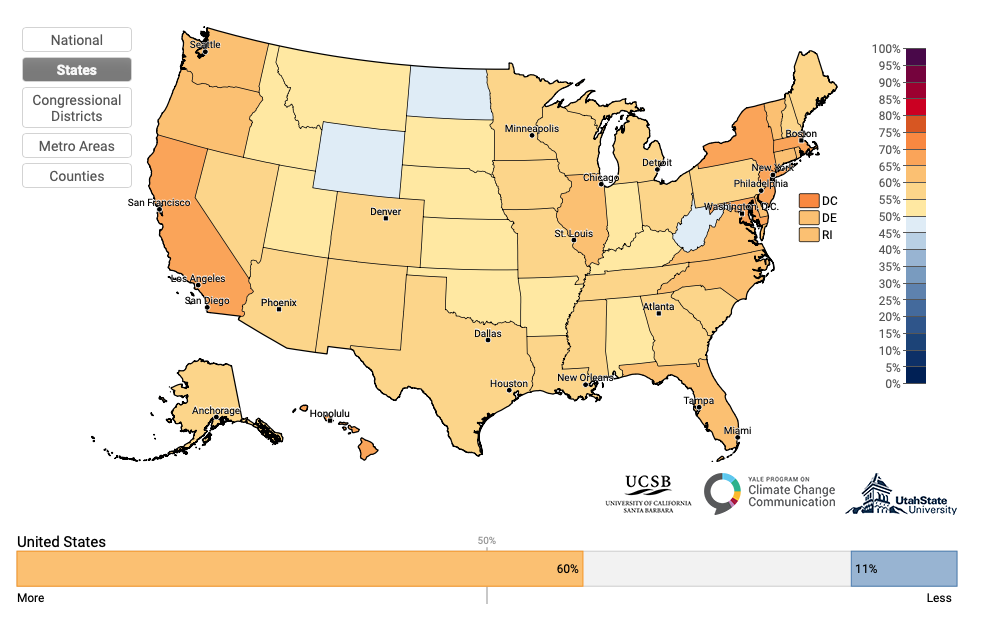 Estimated percentage of adults who think the president should do more to address global warming (60 percent nationally), 2020. Yale Program on Climate Change Communication