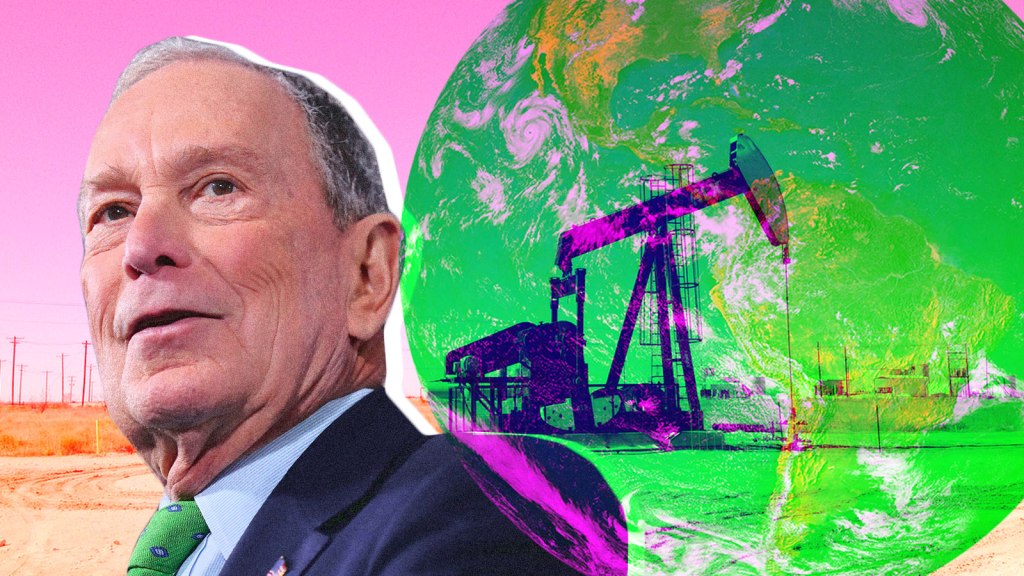 In between absorbing blows from his fellow presidential contenders at the ninth Democratic debate in Nevada on Wednesday, former New York City Mayor Michael Bloomberg tried to present his vision for what his climate agenda might look like if he were elected the next president of the United States. He didn’t quite succeed.

That’s a testament to how bad his debate performance was — because of all the candidates on stage, the billionaire latecomer probably has the strongest climate bona fides. He’s donated millions to shutter coal plants across the United States with his “Beyond Coal” partnership with the Sierra Club, something he briefly touted Wednesday night. In the absence of federal leadership on climate, he’s worked with cities and states to negotiate emissions reductions goals as part of America’s Pledge, an initiative he helped launch.

Similarly to his answers to questions about his personal wealth and treatment of women, Bloomberg basically bungled his opportunity to respond persuasively to prompts about rising temperatures and international cooperation. Aligning himself with moderate candidates like Amy Klobuchar, Bloomberg came out in support of natural gas as a “transition fuel.” Natural gas production in the U.S. has skyrocketed in recent years due to the fracking boom, but recent research shows the fracking industry is largely responsible for a prolonged spike in methane emissions, a greenhouse gas far more powerful than carbon in the short term. (On Thursday, a spokesperson clarified to Grist that Bloomberg believes that “while gas played a useful role in the early stages of transitioning away from coal, its role as a transition fuel has ended now that renewable energy is cheaper and gas is now a bigger source of carbon pollution than coal.”)

Also on Wednesday night, instead of taking a hard line on China — currently the world’s leading emitter of greenhouse gas — Bloomberg pivoted to India, arguing that the developing country was an ”even bigger problem.” While India’s emissions are on the rise, China still emits four times as much carbon from fossil fuel use.

Pundits’ reviews of Bloomberg’s performance were overwhelmingly negative. For the time being though, it looks like Bloomberg’s stash of cash all but ensures his continued presence in the race. And if he can figure out how to communicate more clearly, the next debate is a chance to establish himself as a serious climate candidate.

So how might he do that? He could start by talking about his record. Bloomberg championed climate policies when few politicians were thinking about rising temperatures. After Superstorm Sandy ravaged parts of New York City in 2012, then-Mayor Bloomberg launched a sustainability agenda that was considered to be the most ambitious urban climate mitigation plan in the world.

He led a campaign to protect the city’s drinking water and waged a city-wide effort to revamp its garbage collection system. He created a sustainability task force and, later, a sustainability office that was tasked with tracking the city’s emissions. He attempted to introduce congestion pricing to limit car use in parts of the city. (Though that idea ultimately failed, it’s been reintroduced with more success recently.) Many of his efforts to green the Big Apple went the way of his failed ban on large sodas, but they laid groundwork for the upwelling of urban sustainability efforts happening now across the nation.

“Now you hear a lot about climate action at the national level,” Antha Williams, senior adviser for climate and environment for the Bloomberg campaign, told Grist. “But Mike was really the person who got a lot of that local work started.” That record, she said, will resonate with voters, many of whom say they consider climate change a top priority.

He can also go the Elizabeth Warren route, and get wonky. His specialty is the private sector. He could make a case for why he’s the best candidate to address corporate climate accountability. “One of the things he’s done over the past several years is lead a task force on climate-related financial disclosures,” Williams said, referencing a transparency initiative established in 2015 and chaired by Bloomberg. “That has put together a set of standards that should be reported for companies to actually show their exposure on climate change.”

Or he could set himself apart from his competitors by plugging the work he’s done on the international stage — an area where he is rivaled by only Joe Biden. The United Nations tapped him to be a climate envoy in 2014; and he also served as the head of C40, an international organization of cities committed to climate action. “When Trump walked away from the Paris climate agreement, Mike was there,” Williams said. “He was there to do the reporting that the U.S. shirked.”

Bloomberg’s climate platform checks many of the same boxes as his opponents’ plans: rejoin the Paris Agreement, halve the United States carbon emissions by 2030, invest in frontline communities to combat environmental injustice, the list goes on. As Pete Buttigieg said of those on the debate stage Wednesday night, “I’ve got a plan to get us carbon neutral by 2050. And I think everybody up here has a plan that more or less does the same. So the real question is, how are we going to actually get it done?”

Bloomberg is one of just a few candidates with an actual record to point to in answering that question. But you wouldn’t have known it from his time on stage in Las Vegas.