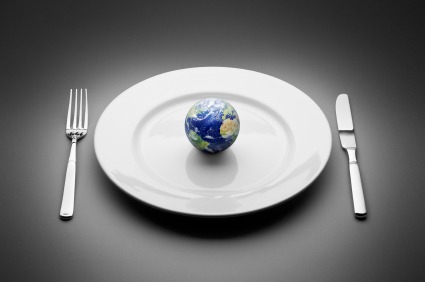 I grew up around the North American Free Trade Agreement. It was all grownups talked about in Detroit: the Sound of NAFTA. Although not much rhymed with that phrase, the hills were indeed alive with the sounds of grouchy tool and die workers, complaining that all of our jobs were going to Mexico.

As a kid, I found it hard to see what was so exciting about jobs. My dad worked in a tool and die shop with bad ventilation and no heat, and every winter he would come down with a case of bronchitis that was one order of magnitude worse than the last. But it didn’t matter what we thought, anyway. George Bush Sr. was for NAFTA, and Bill Clinton was for NAFTA, and the only guy who wasn’t was Ross Perot — which is always a sign your cause is in trouble.

Now, at nearly 20 years of age, NAFTA is almost old enough to drink responsibly. The number of people I knew who worked in tool and die shops went from everybody to nobody, and while on the whole the consensus has been this is Not Great, it’s also been years since my dad has had trouble breathing.

What I didn’t realize at the time was that NAFTA was not just about jobs. Chapter 11 of the agreement contained a provision that has had, and has continued to have, major effects on the environment and environmental regulations.

To understand why, look to the province of Quebec, which, two years ago, put a stop to fracking. At first the move didn’t seem like much. Quebec’s environment minister, Pierre Arcand, said that the province was just going to conduct an environmental review, and that “informative demonstrations” of hydraulic fracturing would still be allowed. But by April, 2012, there was a complete moratorium, the environmental review showed no signs of finishing, and there was talk of extending the ban five years into the future.

Attitudes in Canada seemed to be shifting. “Why does my kid come home from Alberta junior high school social studies saying the oil and gas industry is evil?” Michael Binnion, the CEO of Questerre Energy Corp., complained to Alberta Oil magazine. “I hardly know a senior oil and gas executive who hasn’t had a similar experience.”

But Quebec’s fracking ban wasn’t simply a political move fueled by a cultural shift; it also carried a financial risk. This September, an energy company named Lone Pine Resources sued Canada for allowing the province to tighten its environmental policies, and asked for $250 million. The suit read:

The dispute is in relation to the Government of Quebec’s arbitrary, capricious, and illegal revocation of the Enterprise’s valuable right to mine for oil and gas under the St. Lawrence River, in violation of Chapter Eleven of the NAFTA.

Welcome to NAFTA’s unexpected environmental legacy. Chapter 11 is not well known in the U.S. — its tribunals are secret, and Canada and Mexico are the countries that get sued the most under it. But NAFTA was always meant to be a template for other trade agreements, and since its mid-’90s enactment it has become one. As NAFTA’s offspring have multiplied around the world, so have lawsuits like Lone Pine’s, where corporations seek damages from countries whose environmental regulations affect their ability to do business.

There have been more than 500 cases brought against 95 governments around the world, according to Ilana Solomon, director of the Responsible Trade Program for the Sierra Club. Germany’s decision to phase out nuclear power plants is being challenged by the Swedish company Vattenfall. Uruguay’s move to add warning labels to cigarette packages has prompted a suit from Philip Morris.

If the 1890s were about setting a legal precedent that gave corporations the same rights as people, the 1990s were about adding powers that brought them more in line with nation states. Today, increasingly, corporations in one country get to tell governments in another country what to do.

Now a massive trade agreement, currently in the process of being very contentiously argued, could put the U.S. in the same position as Mexico, Canada, and every other country that has been sued by, and lost to, a company that disagrees with its environmental regulations.

As multinational treaties go, you’d be hard-pressed to find one that is viewed with more suspicion than the Trans-Pacific Partnership (TPP). Democrats are against it. Tea Partiers are against it. People who care about fair use, intellectual property, surveillance, and freedom of information are against it. Nationalists are against it. Congressional representatives have vowed to vote against renewal of the Presidential Fast Track procedure, which would allow the president to sign a final trade agreement without lawmakers having an opportunity to change the pact. Fast Track was a critical factor in the passage of NAFTA and the creation of the World Trade Organization; without it, neither might ever have happened.

Apart from a few documents leaked from TPP negotiations, the specifics of the treaty-in-progress remain a mystery. Members of Congress are only now getting the opportunity to view the printed records of the negotiations, and the records are being kept under heavy secrecy. Congress members have to view the records themselves — no staffers allowed — and if they want any record of what they’ve seen, they have to take notes by hand.

Given the secrecy, is it possible that the TPP will prove to be not so much some great mystery-shrouded peril as just another NAFTA clone, but covering more countries? It’s possible. An early draft of the chapter in TPP related to investments, leaked about a year ago, looked like NAFTA, according to Solomon. NAFTA, now nearly 20 years old, does have its fanboys as well as its detractors.

Despite all this, says Solomon, the TPP will not be a precise twin of NAFTA. In certain ways, it’s worse. In what seemed to be a measure designed to curry favor with Japan, now the world’s largest natural gas importer, the TPP would legally obligate the U.S. to export gas to Japan — right when, says Solomon, the U.S. should be scaling down its natural gas operations in order to meet its emissions goals, instead of building new pipelines, refineries, and export terminals.

On other environmental issues, according to Solomon, the TPP improves on NAFTA in some ways. The United States has proposed rules that would ban trade in illegally harvested timber and endangered animals, and bind everyone in the agreement to end any government subsidies that encourage overfishing. On the other hand, says Solomon, the free trade agreement between the U.S. and Peru has a similar timber rule. “There have been documented violations of that chapter in Peru,” says Solomon. “Illegal logging. Lumber trade with the U.S. Even though the U.S. Trade Representative has been informed, there has been no investigation.”

As far as Chapter 11-style lawsuits go, though, the TPP looks like it will be much the same as NAFTA. Under NAFTA, cases like the Lone Pine suit are resolved not by the courts but in arbitration, via a tribunal of three judges, no appeal. The arbitration is as secret as the treaty negotiations are now. Environmental organizations like the Sierra Club, says Solomon, have a hard time finding out much of what is happening in an environmental case beyond the names of the parties. “Sometimes we don’t even have that,” she says. “We only find out about it months later.”

In 20 years of NAFTA, America has been remarkably lucky at avoiding Chapter 11 lawsuits. The most serious close miss was arguably the Methanex case, when a Vancouver-based company sued the state of California for $970 million in damages after it banned MTBE, a gasoline additive that the company manufactured one of the chemical components of. The arbitration tribunal ruled against Methanex and ordered it to pay $4 million in legal fees, and the United States has continued to win every case filed against it.

This has been because up until now, the United States has mostly entered into trade agreements with countries that aren’t home to companies that have major investments within our borders. No investment, no lawsuit.

In other situations — as under the rules of the World Trade Organization, which came into being in 1995, a year after NAFTA, and has a similar arbitration setup, but allows for nations suing nations rather than corporations suing nations — the U.S. gets sued often by other WTO members. Often, it loses — as it did last spring, when a WTO appellate panel ruled that labeling American tuna “dolphin safe” was hurting the Mexican tuna industry.

Chapter 11 was built into NAFTA in 1994 as a way to — or so the story went — ease the troubled minds of businesspeople who were worried that the phrase “investing in Mexico” was just a code word for “getting your factory expropriated by revolutionaries.” Rather than working through a potentially corrupt foreign court system in search of damages, or asking your home country to intercede on your behalf, Chapter 11 created an arbitration system where company met country on equal footing: in a secret, offshore court, in front of a panel of three judges. Since NAFTA was written, Chapter 11 has been used for zero expropriation cases; but its enhancement of corporations’ legal standing has continued to migrate into treaty language around the world.

Since NAFTA’s passage, also, companies have further diffused their national identities. A cynical person might note that until 2011, Lone Pine and its wholly owned subsidiary, Lone Pine Resources Canada Ltd., had a different name. That name was Canadian Forest Oil, Ltd. Sound Canadian? It was pretty Canadian. Lone Pine’s headquarters are still in Alberta, Canada — also very Canadian of them. But Lone Pine qualifies as an American company because it’s incorporated in Delaware. Does all of this suggest that Lone Pine is a Canadian company which switched nationalities partly in order to use NAFTA to evade its own country’s environmental regulations? Hard to say with any certainty, but it sure looks that way.

For a company to sue you under Chapter 11 arbitration, it must have an existing or planned investment in your country. Not many companies in Mexico, or Canada, or Latin America have existing investments in the U.S. That will almost certainly change under the Trans Pacific Partnership. For the first time, the U.S. will share a NAFTA-style arrangement with countries that have significant American investments — like Japan and Singapore.

“We’ve been lucky,” says Solomon. “And we think that luck is going to run out.”