Last weekend, the social media emanating from my New York friends went through a change. The selfies, brunch photos, and laments over the New York dating life were replaced with images of impossibly large groups of people carrying coffins over the Brooklyn Bridge and holding die-ins at Grand Central Station.

This week, L.A. Kauffman, a historian of social movements, tackles this phenomenon in The Baffler. In short: Something really big is going down in the rest of the country, but especially in New York.

The first few nights after the Eric Garner non-indictment, it was nearly impossible to keep track of how many different groups were marching through the city: while one crowd was pouring over the Brooklyn Bridge, another was disrupting the West Side Highway, and another blocking the streets around Times Square. Marches splintered, then rejoined; they met police blockades, and defiantly swarmed around them; they stopped to block key sites, then quickly moved on.  The protests have been mobile and deft, steered by tactically savvy organizers for maximal disruption and minimal arrests. Crowds blockade intersections until the police get antsy, then quickly march off to a new target; they swarm high-profile sites like Grand Central Station and Macy’s Herald Square, disrupt with loud chants, shift to a silent die-in, and then move on. 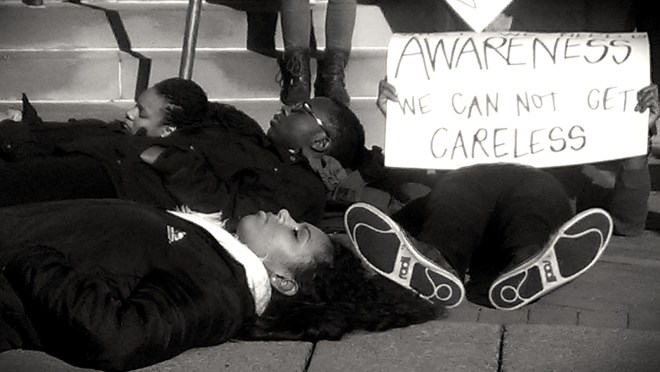 To Kauffman, the “grief and anger, and the seriousness of purpose” shown in these protests hasn’t been seen in New York since the days of ACT UP, in the ’80s — with one critical difference:

ACT UP in its heyday was majority white, as were most of the movements of the last 30 years that used disruptive direct action as a central part of their strategy. This style of organized, uncompromising protest was pioneered by the young black activists of SNCC and other cutting-edge civil rights group in the mid-1960s, but many movements of color turned away from it by the early 1970s, opting for other tactics and strategies. The stakes were always higher for black and brown street activists, whether they were taking part in a campus sit-in or marching on the streets; they were far more likely than white activists to be met with police violence, to be charged harshly for minor offenses, and to face serious consequences for interfering with business as usual.

These differences in styles of protest often led to tensions between activists of color and white activists, especially in the relatively rare occasions when they joined together in shared organizing, such as during the anti-apartheid movement of the 1980s. White activists could be stunningly oblivious about why their counterparts of color didn’t want to engage in roving blockades or other high-risk actions.

When I was traveling to People’s Climate March in New York I did notice that within a group of black activists traveling to the march from Richmond, Calif., older members discouraged younger ones from going to Flood Wall Street, the direct action planned for the day after the march. I did not see any of the Richmond group at Flood Wall Street — there were a few people of color there, but Flood Wall Street, in general, was a lot whiter than the Climate March. Meanwhile, if you look at the arrest stats provided to the Wall Street Journal by the New York police last weekend, the people getting arrested are a diverse bunch.

Kauffman dates this renaissance of direct action in people-of-color-led movements to the organizing that has happened during and after Ferguson. But she also points to earlier signs that a shift was underway — including the month-long occupation of the Florida state capitol building (after the acquittal of George Zimmerman for the killing of Trayvon Martin) by a group of young activists who called themselves the Dream Defenders. Similar direct actions have been taking place across the country since Ferguson, in places like Miami, Las Vegas, Chicago, Boston, Los Angeles, Washington, D.C., New Orleans, Philadelphia, Baltimore, and Oakland.

Kauffman’s take on this makes sense, but I would also credit the difference between then and now — in New York, at least — to something else as well: The city has a new mayor, Bill de Blasio, and a black first lady, Chirlane McCray. The two come from activist backgrounds, and actually used civil disobedience as part of de Blasio’s campaign strategy. (McCray contemplated getting arrested at a women’s rights protest, and de Blasio actually did get arrested protesting a hospital closure.) This September, McCray became the only first lady in New York history to attend an NYPD CompStat meeting (a weekly review of computerized crime statistics).

During the time I spent covering Flood Wall Street, I heard several activist veterans of Occupy Wall Street marvel that this kind of direct action would have been shut down in a matter of minutes during the Bloomberg administration, and now it was stretching out for hours. The people who did get arrested that night put in some serious effort to do so.

People complain that police departments and their habits are hard to change. This is true, for a lot of reasons: There’s a culture of “protect your own” on the force, it’s difficult to fire a police officer who behaves badly, and it’s very difficult to investigate and prosecute them if they use excessive force. But behavior does shift when a new political administration takes power with a new agenda, even if the parties who are supposed to change resist.

A grand jury may have failed to indict officer Daniel Pantaleo for choking Eric Garner, in violation of the NYPD’s own regulations — but the people of New York are more free to express their outrage. It’s not everything, but it’s a start.